Kids Encyclopedia Facts
Not to be confused with Harris County, Texas.

Harris County is a county located in the west central portion of the U.S. state of Georgia; its western border is formed by the Chattahoochee River. As of the 2010 census, the population was 32,024. The county seat is Hamilton. The county was created on December 14, 1827 and named for Charles Harris, a Georgia judge and attorney.

The county was settled by European Americans largely after the federal government had forcibly removed the indigenous Creek people (Muscogee), who were relocated to Indian Territory west of the Mississippi River. In the antebellum era, parts of the county were developed for cotton plantations, the premier commodity crop. Planters imported numerous slaves from the Upper South through the domestic slave trade as workers.

The County courthouse was designed by Edward Columbus Hosford of Georgia and completed in 1906.

By the late 19th century, there had been numerous interracial relationships between whites and blacks both before and after the war; many residents were of mixed race, typically with European ancestry through the paternal line. There were 200 years of families with many inter-connections among them; justice was nearly always meted out to kin. Periodically some of the whites would try to reduce the relations of white men with mixed-race and black women, a movement that started in the late 19th century. The mountain areas of the county had moonshiners in the late 19th and early 20th centuries; both whites and blacks took part in this.

The county is now part of the Columbus, Georgia metropolitan area, which has become industrialized and developed a more varied economy. By per capita income, the county is the sixth-wealthiest in the state of Georgia, and the wealthiest county in the state outside of Metro Atlanta. 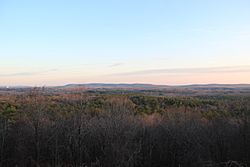 All content from Kiddle encyclopedia articles (including the article images and facts) can be freely used under Attribution-ShareAlike license, unless stated otherwise. Cite this article:
Harris County, Georgia Facts for Kids. Kiddle Encyclopedia.