Heaton is a residential suburb in the east end of Newcastle upon Tyne, England, about 2 miles (3 km) from the city centre. It is bordered by the neighbouring areas of Benton and Cochrane Park to the north, Walker and Walkergate to the east, Byker to the south and Jesmond and Sandyford to the west. The name Heaton means high town, referring to the area "being situated on hills above the Ouseburn, a tributary of the River Tyne."

In the 12th century Heaton became part of the Barony of Ellingham granted by Henry I to Nicholas de Grenville. King John stayed in the castle at Heaton (the remains of which can still be seen in Heaton Park) on a number of occasions. In the 17th century the Heaton estate was purchased by Henry Babington who was knighted at Heaton Hall by James I on 1 May 1617.

By the 18th century, Heaton was a coal mining area with many of its collieries owned by Matthew White and Richard Ridley. The Heaton estate was broken up in 1835 when the area became officially incorporated into Newcastle upon Tyne. Much of the land in Heaton in 1841 was owned by Armorer Donkin, who on his death in 1851 bequeathed the land to his business partner, the industrialist Sir William Armstrong.

In 1879, the corporation acquired part of the Heaton Hall estate, which was then laid out as Heaton Park, and Sir William Armstrong donated Armstrong Park and Jesmond Dene to the city. The three parks run into each other to form a green corridor through east Newcastle. 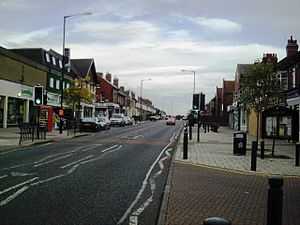 Towards the north of Chillingham Road 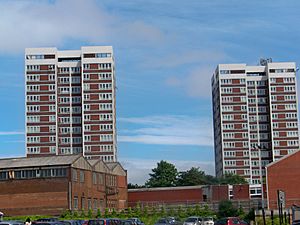 Heaton is a mixed working class and middle class area. In recent years it has become a popular residence for many students attending the city's two universities, Newcastle University and Northumbria University. Rent and student letting is generally lower in price than the neighbouring student area of Jesmond and Sandyford.

Heaton was originally served by Heaton railway station, which was on the main line from Newcastle Central Station to Edinburgh and also on the direct line from Newcastle to the coast. That station was closed on 11 August 1980, when the Tyne and Wear Metro system opened. Heaton is now served by Chillingham Road Metro station on the Tyne and Wear Metro, but Byker Metro station is closer for some living in South Heaton. Heaton is also served by a variety of bus routes, including routes 1, 62 and 63, which link Heaton to Newcastle City Centre and areas in the west of Newcastle.

All content from Kiddle encyclopedia articles (including the article images and facts) can be freely used under Attribution-ShareAlike license, unless stated otherwise. Cite this article:
Heaton, Newcastle Facts for Kids. Kiddle Encyclopedia.