Henry the Navigator facts for kids 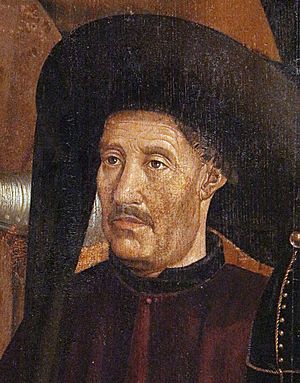 Prince Henry the Navigator (1394–1460) was a prince from Portugal, the third son of King John I of Portugal. He was called Infante Dom Henrique in Portuguese. He was never a navigator himself. He got his name because he organized many ocean voyages on which lands were found. He is seen as the man who started the Age of Discovery. He also opened a navigation school in Portugal, so the technology of tools and ships could be made better. His explorers discovered the first shipping routes directly from Europe to Asia for the Portuguese monarchy.

All content from Kiddle encyclopedia articles (including the article images and facts) can be freely used under Attribution-ShareAlike license, unless stated otherwise. Cite this article:
Henry the Navigator Facts for Kids. Kiddle Encyclopedia.