Hoodoo Mountain is a potentially active flat-topped stratovolcano in the Stikine Country of northwestern British Columbia, Canada, located 74 km (46 mi) northeast of Wrangell, Alaska, on the north side of the lower Iskut River and 30 km (19 mi) east of its junction with the Stikine River. It is situated in the Boundary Ranges of the Coast Mountains and existed since the Late Pleistocene stage of the Pleistocene epoch, which began 130,000 years ago and ended 10,000 years ago.

The mountain gets its name from the needle-like lava spines or hoodoos that reach heights of 150 m (490 ft), which give the volcano a strange appearance. This appearance makes Hoodoo Mountain different from other neighbouring mountains in the Boundary Ranges.

The volcano boasts an ice cap on its summit, and radar imaging of the rock beneath the ice has shown that the mountain's flat-topped summit is not just attributable to the ice cap, but the top of the mountain is flat as well. Beneath the summit ice cap lies an ice-filled volcanic crater that rises at an elevation of 1,850 m (6,070 ft) and a topographic prominence of 900 m (2,950 ft). Except for minor irregularities caused by erosion, any contour line drawn is practically a circle.

Hoodoo Mountain consists of a balanced lava dome 6 km (4 mi) in diameter and throughout most of its history, it has been influenced by glacial ice, causing several periods of subglacial eruptions and interactions between volcanic activity and ice sheets. This volcanic process has created Hoodoo's structure and stratigraphy similar to subglacial volcanoes. 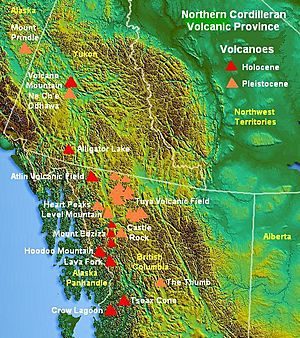 Hoodoo Mountain lies on the southern axis of the Northern Cordilleran Volcanic Province, a large line of volcanoes extending from the Alaska-Yukon border to a point near Prince Rupert, British Columbia. The region in turn is part of the Pacific Ring of Fire, a seismically active region that encircles the Pacific Ocean and contains some of the world's most active volcanoes. The Northern Cordilleran Volcanic Province is produced by continental rifting as the Pacific Plate slides northward along the Queen Charlotte Fault, on its way to the Aleutian Trench, which extends along the southern coastline of Alaska and the adjacent waters of northeastern Siberia off the coast of Kamchatka Peninsula. As the continental crust stretches, hot magma rises and the near-surface rocks fracture along steeply graduated cracks parallel to the rift known as faults. Like many other rift-related volcanoes, Hoodoo Mountain generates passive and occasionally explosive eruptions. Hoodoo Mountain is one of the three large compositionally diverse volcanoes of the Northern Cordilleran Volcanic Province along with the Mount Edziza volcanic complex and Level Mountain.

The overall flat-topped topography of Hoodoo Mountain led Canadian volcanologist Jack Souther to refer Hoodoo Mountain as a tuya, which are flat-topped, steep-sided subglacial volcanoes formed when lava erupts through a thick glacier or ice sheet. However, Hoodoo Mountain does not fit the normal tuya model because of its complex layering of rocks, although Hoodoo's unusual structure obviously results from frequent interactions between volcanic activity and Pleistocene ice sheets over the past 100,000 years. 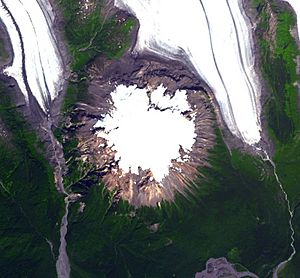 Satellite image of Hoodoo Mountain. Glaciers are the Hoodoo and Twin glaciers, respectively.

Hoodoo Mountain contains at least two sets of prominent cliffs, producing a discontinuous, step-like topographic profile. The base of Hoodoo Mountain is largely delimited by a series of cliffs that range from 100 m (330 ft) to 200 m (660 ft) high, while Hoodoo's southeastern flank is relatively gentle. Here, lava flows from the most recent volcanic activity cover earlier topography; the southeastern flank is smooth from around the summit to the Iskut River. The top of the lower cliff ring defines a broad bench with an elevation of about 1,000 m (3,300 ft) that terminates against an upper set of cliffs. The seconed set of vertical cliffs is between 50 m (160 ft) and 100 m (330 ft) high and surrounds the summit. A prominent dike, known as The Monument, rises more than 100 m (330 ft) in elevation on Hoodoo's southwestern flank and is the remnants of a volcanic vent surrounded by thick deposits of lava and breccia formed during subglacial eruptions.

Hoodoo Mountain lies in an area of high elevation ecosystems colonizing very erodible substrate. The mountain is generally poorly forested due to its high altitude and remote alpine location. This mountainous terrain has made Hoodoo Mountain a site for alpine tundra. Even though alpine tundra lacks trees, Hoodoo's lower flanks contain mountain hemlock. Because alpine tundra is located in various widely separated regions on Earth, there is no animal species common to all areas of alpine tundra.

Map of the Hoodoo Mountain area, including the Hoodoo and Twin glaciers and Little Bear Mountain.

The western, eastern and northern flanks of Hoodoo Mountain are covered by two valley glaciers known as the Hoodoo and Twin glaciers, while Hoodoo's southern flank, which extends down to the floodplain of the Iskut River, is free from glacial ice. Hoodoo Glacier on the volcano's western flank extends at the head of the Hoodoo River, while the Twin Glacier on Hoodoo's northern and eastern flanks lies at the headwaters of the Twin River. In the past, Hoodoo Mountain has been covered by glacial ice more than 2 km (1 mi) thick.

The relatively small size of Little Bear Mountain and its close connection with Hoodoo Mountain indicates it is a parasitic cone. Such geographical features are formed when the vent of the main volcanic edifice (i.e. Hoodoo Mountain) is blocked by cooled and solidified lava, forcing magma to intrude into the lines of weakness at the side of the main volcanic edifice under pressure.

Eruption styles that may have produced the three different types of ice-contact deposits at Hoodoo Mountain.

The main volcanics at Hoodoo Mountain are phonolite and comendic trachyte lavas and hyaloclastites, although some pyroclastic rocks also exist. The trachyte and comendic magmas erupted from Hoodoo Mountain and other Northern Cordilleran volcanoes are thought to have been created by fractionation of primary alkali basaltic magma in crustal reservoirs. The estimated volume of erupted material from Hoodoo Mountain is 17 km3 (4 cu mi), and at least six phases of eruptive activity are recognized at the volcano. The first phase of eruptive activity occurred 85,000 years ago in the Late Pleistocene stage of the Pleistocene epoch, producing lava flows, lava domes, and breccia deposits. These volcanics were erupted under more than 100 m (328 ft) of glacial ice to produce subglacial eruptions. 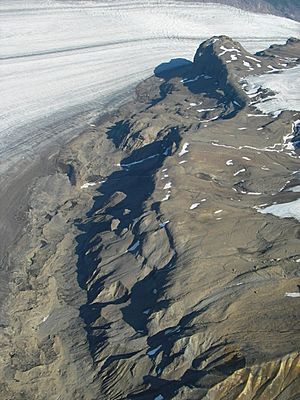 Hoodoo Glacier and lava flows on the flanks of Hoodoo Mountain.

During the second eruptive phase 80,000 years ago, eruptions were no longer subglacial, but the volcano was surrounded by ice at least 800 m (2,625 ft) thick. Lava flows during this eruptive phase melted some of the thick glacial ice and ponded around the perimeters of Hoodoo Mountain, which quickly solidified to form a barrier behind which more lava piled up. Such ice-marginal lava flows are anomalously thick and are normally bounded by steep cliffs with fine-scale cooling joints and much volcanic glass. These ice-marginal lava flows form the massive lava cliffs near the base of Hoodoo Mountain and are among Hoodoo's most prominent features.

The third eruptive phase between 80 and 54 thousand years ago was followed by explosive activity that produced pyroclastic flows down the northern and western flanks of the mountain to create welded and unwelded ignimbrite deposits up to 100 m (328 ft) thick. This explosive activity is one of the few explosive eruptions throughout Hoodoo Mountain's eruptive history, and could have been caused by magma breaching thinner ice.

The final phase of eruptive activity was effusive in nature with no explosive activity (VEI-0). This effusive volcanism produced lava flows with well-preserved lava channels on the northwest and southwest flanks of Hoodoo Mountain in the early Holocene epoch and are largely unglaciated, suggesting the final eruptive phase occurred in an ice-free environment. These lava flows originated from the mountain's flat-topped summit and volcanic vents on its flanks. Geologists do not always agree on the dates of these more recent eruptions, some dating them to nine thousand years ago, others to as recently as seven thousand years ago. 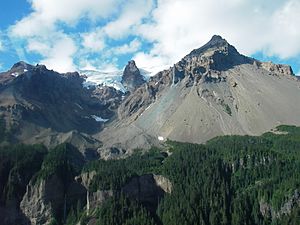 Hoodoo Mountain is one of the eleven Canadian volcanoes associated with recent seismic activity: the others are Mount Garibaldi, Castle Rock, Mount Cayley massif, The Volcano, Crow Lagoon, Silverthrone Caldera, the Mount Meager massif, the Mount Edziza volcanic complex, Wells Gray-Clearwater volcanic field and Nazko Cone. Seismic data suggests that these volcanoes still contain living magma chambers, indicating possible future eruptive activity. Although the available data does not produce a clear conclusion, these observations are further indications that some of Canada's volcanoes are potentially active, and that their associated hazards may be significant. The seismic activity correlates both with some of Canada's most youthful volcanoes, and with long-lived volcanoes with a history of significant explosive activity, such as Hoodoo Mountain.

The volcano continues to pose a serious threat to the surrounding area. In 1997, a group of university and industry scientists associated with the Geological Survey of Canada spent six weeks camping at the edge of Hoodoo's summit ice cap to determine the volume of water on the volcano's summit which could be mobilized in the event of an eruption using ice-penetrating radar. This group included Mark Stasiuk and Catherine Hickson of the Geological Survey of Canada, Alison Rust, Kelly Russell and Ben Edwards of the University of British Columbia, Trevor Page of Lancaster University, Guy Cross and Jeff Schmok of Golder Associates and Jim Nicholls of the University of Calgary. Hoodoo's summit ice cap remains 150 m (490 ft) thick and 3 km (1.9 mi) in diameter and throughout the volcano's history, it has been influenced by glacial ice. Most of the volcano's volcanic activity has produced lava flows from its flat-topped summit, indicating any potential volcanism will occur under the summit ice cap to trigger considerable melting, flooding and mudflows, which could have a disastrous effect on the adjacent Iskut and Stikine rivers. Although very few people live in the region, large mining and mineral exploration camps exist 15 km (9.3 mi) south of Hoodoo Mountain on the Iskut River. Should there be renewed activity in the form of lava flows, damming of the Iskut River would be a significant hazard to these mining and mineral operations. In the 1980s, the Iskut River was studied as a possible site for a hydroelectric plan. However, the plain was left alone partly because of the uncertain volcanic potential in the surrounding environment. High columns of volcanic ash associated with explosive eruptions would have more widespread effects, including disruption of air traffic between Canada, Alaska, and Asia. However, this is a less possibility because most eruptions at Hoodoo Mountain are lava flows.

The Interagency Volcanic Event Notification Plan, Canada's volcanic emergency notification program, was established to outline the notification procedure to some of the main agencies that would be involved in response to a volcanic eruption in Canada, an eruption close to Canada's borders, or an eruption significant enough to have an effect on Canada and its people. It focuses primarily on aviation safety because air traffic can quickly enter areas of volcanic ash. The program notifies all impacted agencies that have to deal with volcanic events. Aircraft are rerouted away from hazardous ash and people on the ground are notified of potential ash fall.

Currently Hoodoo Mountain is not monitored closely enough by the Geological Survey of Canada to ascertain how active the volcano's magma chamber is. The existing network of seismographs has been established to monitor tectonic earthquakes and is too far away to provide a good indication of what is happening beneath the mountain. It may sense an increase in activity if the volcano becomes very restless, but this may only provide a warning for a large eruption. It might detect activity only once the volcano has started erupting.

All content from Kiddle encyclopedia articles (including the article images and facts) can be freely used under Attribution-ShareAlike license, unless stated otherwise. Cite this article:
Hoodoo Mountain Facts for Kids. Kiddle Encyclopedia.