Image Lake is a tarn in Glacier Peak Wilderness, in the North Cascades of Washington, United States. The lake is surrounded by Plummer Peak to the east, a lookout point to the west, the Miners Creek drainage and Glacier Peak to the south, and Canyon Lake to the north. The course of the popular Miners Ridge Trail skirts the lake. Glacier Peak can be seen from the outlet of the lake, and the peak reflected in the lake is a popular photographic subject.

As a result of a relatively mild temperate climate with ample precipitation, the areas around Image Lake boast rich natural habitats with many species of plants, insects, rodents, and large mammals. Native Americans took advantage of these resources, and may have inhabited the area seasonally. However, human activity such as hunting, fishing, and mining, and recreational overuse increased after the arrival of Europeans. As a result, some areas experienced significant environmental degradation near the end of the nineteenth century and the early twentieth century, including the eradication of large predatory animals. Recreational overuse and the presence of livestock were especially problematic in the early to mid-twentieth century.

Image Lake is located in the marine west coast climate zone of western North America. Most weather fronts originate in the Pacific Ocean, and travel northeast toward the Cascade Mountains, which surround Image Lake. As fronts from approach the North Cascades, they are forced upward by the peaks of the Cascade Range, causing them to drop their moisture in the form of rain or snowfall onto the Cascades. As a result, the west side of the North Cascades experiences high precipitation, especially during the winter months in the form of snowfall. Due to its temperate climate and proximity to the Pacific Ocean, areas west of the Cascade Crest very rarely experience temperatures below 0 °F (−18 °C) or above 80 °F (27 °C). During winter months, weather is usually cloudy, but, due to high pressure systems over the Pacific Ocean that intensify during summer months, there is often little or no cloud cover during the summer. Because of maritime influence, snow tends to be wet and heavy, resulting in high avalanche danger.

Global warming is expected to have a number of negative long-term ecological impacts on the region, including drought, increased forest fires, forest degradation to drought and disease, and less healthy or nonexistent salmon runs. The distribution and survival of plant species, especially those that inhabit alpine environments, as well as animals that are specifically adapted to those environments, will also be adversely affected. Glaciers are also expected to recede due to a decreased buildup of snowpack and higher overall temperatures. 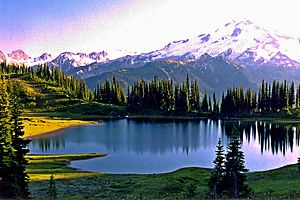 Image Lake has a drainage basin with an area of less than 1 square mile (2.6 km2). Its primary outflow is a small, unnamed creek that feeds into Miners Creek, which in turn drains into the Suiattle River. The Suiattle River drains into the Skagit River, which in turn empties into Puget Sound. The highest point in the drainage basin is nearly 7,000 feet (2,100 m) above sea level. The lake itself is roughly circular, and has an area of about 3–4 acres (1.2–1.6 ha).

Subduction and tectonic activity began in the area began during the late cretaceous period, about 90 million years ago. The area was previously an oceanic environment, consisting mainly of sedimentary and volcanic rocks. Extensive volcanic activity began to take place in the oligocene, about 35 million years ago. However, mountain building in the area did not begin until the miocene, approximately 10 million years ago. Image Lake is located in the Cloudy Pass batholith, an intrusive formation that was formed approximately 20 million years ago, during the early miocene. Glacier Peak, a stratovolcano that is south of Image Lake, began forming in the mid-Pleistocene. Due to Glacier Peak's proximity to Image Lake, volcanic ash is quite common in the area, and plays a major role in the formation of soil.

Throughout the ice age, the North Cascades were mostly covered in thick glaciers, extending to near Puget Sound. Glaciation was most prevalent approximately 18,000 years ago, and most valleys were ice-free by 12,000 years ago. As a result, valleys in the area are deep and u-shaped, and mountains tend to be rocky, with steep slopes and narrow summits. 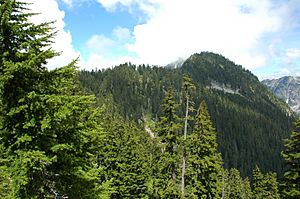 Image Lake and the surrounding area is in the North Cascades ecoregion, and temperate rainforests grow at lower elevations, such as in the Suiattle River valley. Common trees in this habitat include western redcedar, western hemlock, and Douglas fir. At middle elevations, forests are dominated by Pacific silver fir and, to a lesser extent, Alaska cedar. Devil's club and huckleberry grow in moist areas on the forest floor. However, beargrass and salal dominate in drier areas. The mid-elevation forests also receive more precipitation, especially in the form of snowfall, than lower elevations. Western hemlock and Douglas fir are also present, especially at the lower edge of the mid-elevation forest zone. At higher elevations, Douglas fir and redcedar are largely replaced by mountain hemlock and Alaska cedar, which both become more common as elevation increases. The mid-elevation forest zone often occupies the steepest slopes on the mountainside, which result in the occurrence of avalanche tracks. Avalanche tracks are usually occupied by scrub such as Sitka alder, as well as smaller shrubs and herbs.

At higher elevations, mountain hemlock and subalpine fir are the most common trees. Alaska cedar and whitebark pine are also present. However, as the elevation increases, the forest becomes increasingly fragmented, and is interspersed with meadows consisting of grasses, herbs, and shrubs. Scree slopes are also common. Temperatures can vary greatly within one day due to the high altitude of the habitat and lack of forest cover. For the same reasons, the parkland also experiences increased solar radiation. At the upper edge of the parkland, trees tend to be stunted, and grow in small clumps. Common shrubs include heather and mountain huckleberry. Off-trail hiking can be very destructive in the sub-alpine zone.

Above the subalpine zone, trees become less common. Trees that do manage to gain a foothold are often stunted, with contorted branches due to high winds, increased snowfall, and growing seasons of 2–3 months. These trees are known as "krummholz", which means "bent wood" in German. Heather, herbs, and grasses are also present, but are often very sparse. Temperatures often fluctuate greatly, making for a difficult growing season. 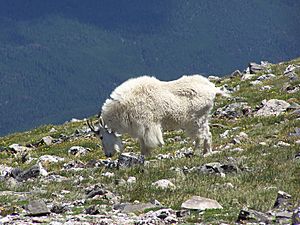 Wildlife is common in the area's ecosystem. Marmots tend to live in large social groups, and play a role in regulating the alpine vegetation. Eagles, hawks, coyotes, and badgers are common predatory animals. Clark's nutcrackers and Canada jays are also common, and various species of grouse are present. Insects and hummingbirds are common pollinators.

Larger animals are not as common, but are still present. A grizzly bear was photographed near Cascade pass in October 2010, and as many as twenty grizzlies may be living in the Cascades, south of the Canada–US border. Wolves, pine martens lynx, wolverines, cougars, weasels, and black bears are also present, and are usually detected by camera traps. During the summer, bears consume up to 30,000 calories a day in preparation for hibernation, in a dietary phase known as hyperphagia. There have also been attempts to re-introduce fishers to the region. Cougars are mainly nocturnal and solitary, and are so secretive that they are seldom seen. Wolves were eradicated from the Cascades by the 1930s, but began re-establishing resident packs at least as early as 1990.

The most common large herbivore is the black-tailed deer, a subspecies of the mule deer. Elk and moose are less common. Mountain goats are well-adapted to steep terrain and cold temperatures, and are not usually found at lower elevations. There are eight species of bats that live in the North Cascades.

There is archaeological evidence that Native Americans had been using the area for at least 8,500 years before present, and had been present at Cascade Pass for at least 9,600 years. Wild game was apparently utilized by Native Americans, and obsidian was exploited since at least 5,000 years before present. They used several routes that passed through the region, and may have used its natural resources during the summer. Some tribes personified the mountains and incorporated them into their religions. Many of these routes followed ridge tops in order to avoid the dense brush and avalanche chutes of the valley bottoms. Horses were also used in the eighteenth century. There was a trail used by Native Americans as a route between Lake Chelan and the Suiattle River valley. The trail apparently traversed Cloudy Pass, which is some distance east of the lake. It was later used by miners and shepherds in the early 1900s. Shepherding was banned on Miners Ridge in 1940, but the popularity of the area continued to grow. Due to the area's popularity, the surrounding meadows deteriorated as a result of livestock grazing and off-trail hiking. As a result, livestock were allocated to the nearby Lady Camp Basin and hardier plants were introduced to the area surrounding the lake.

Image Lake was originally called "Mirror Lake", but was given its present name on April 10, 1940 by Hugh Ritter and Rudo Fromme, who were employees of the US Forest Service. The lake was first surveyed on July 14, 1939 by the Forest Service.

Kennecott Copper Corporation, as of 1988, planned to dig an open-pit copper mine in a basin approximately one mile east of Image Lake. However, protests by various advocacy groups, such as The Mountaineers, prevented the plan from developing further.

In 2003, floods washed out large portions of the Suiattle River Road, beginning 12.5 miles (20.1 km) from the trailhead, making Image Lake more accessible from Holden or Trinity. As of August 2013, construction crews are repairing the road, which was scheduled to be open by 2014. However, the Forest Service has a limited budget, and the effort to rebuild the road has been criticized by environmental groups, partly because of the lower number of visitors, since access from the west has become almost impossible. Since Image Lake is all but inaccessible from the west, it is necessary for hikers to access the lake from the east, via a two-day hike from Holden or Trinity. 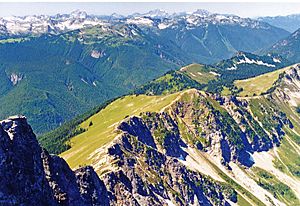 The trail to Image Lake can be accessed from the Suiattle River Road. It can also be accessed from Holden, on the east side of the Cascade crest, west of Lake Chelan. The trail begins by following the Suiattle River, eventually reaching open meadows with views of Glacier Peak. There is also an alpine route that leads from the Miners Ridge Trail to Plummer Mountain, and a little used trail that leads to Canyon Lake and Totem Pass, which is about 4 miles (6.4 km) southeast of Dome Peak.

All content from Kiddle encyclopedia articles (including the article images and facts) can be freely used under Attribution-ShareAlike license, unless stated otherwise.