Jean Renoir ( 15 September 1894 – 12 February 1979) was a French film director, screenwriter, actor, producer and author. As a film director and actor, he made more than forty films from the silent era to the end of the 1960s. His films La Grande Illusion (1937) and The Rules of the Game (1939) are often cited by critics as among the greatest films ever made. He was ranked by the BFI's Sight & Sound poll of critics in 2002 as the fourth greatest director of all time. Among numerous honors accrued during his lifetime, he received a Lifetime Achievement Academy Award in 1975 for his contribution to the motion picture industry. Renoir was the son of the painter Pierre-Auguste Renoir. He was one of the first filmmakers to be known as an auteur. 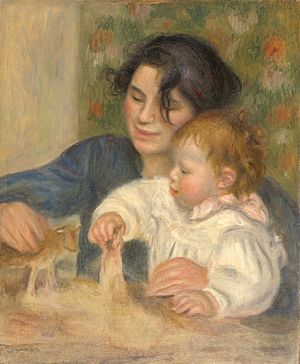 The young Renoir with Gabrielle Renard in a painting by his father Pierre-Auguste Renoir.

All content from Kiddle encyclopedia articles (including the article images and facts) can be freely used under Attribution-ShareAlike license, unless stated otherwise. Cite this article:
Jean Renoir Facts for Kids. Kiddle Encyclopedia.