Kaikoura (Māori: Te Ahi Kaikōura a Tama ki te Rangi) is a town on the east coast of the South Island of New Zealand. It is located on State Highway 1, 180 km north of Christchurch.

Kaikoura became the first local authority in the Southern Hemisphere to achieve recognition by the EarthCheck Community Standard.

The town has an estimated permanent resident population of 2,080 (as of June 2016). The town is the governmental seat of the territorial authority of the Kaikoura District, which is politically a part of the Canterbury region. The District has a land area of 2,046.41 km² (790.12 sq mi) and an estimated population of 3,740 inhabitants.

The infrastructure of Kaikoura was heavily damaged in the 2016 Kaikoura earthquake, which also caused two deaths in the area. The sea level of the bay and surrounding region was lifted by as much as 2 meters.

From 1853 to 1876, Kaikoura was administrated as part of the Nelson Province. In 1876 the Kaikoura County was formed.

On 14 November 2016, a 7.8-magnitude earthquake struck the South Island just after midnight. It left two people dead and triggered a small tsunami. One thousand tourists and hundreds of residents were stranded in Kaikoura after the earthquake cut off train and vehicle access.

The Kaikoura Peninsula extends into the sea south of the town, and the resulting upwelling currents bring an abundance of marine life from the depths of the nearby Hikurangi Trench. The town owes its origin to this effect, since it developed as a centre for the whaling industry. The name Kaikoura means 'meal of crayfish' (kai – food/meal, kōura – crayfish) and the crayfish industry still plays a role in the economy of the region. However Kaikoura has now become a popular tourist destination, mainly for whale watching (the sperm whale watching is perhaps the best and most developed in the world) and swimming with or near dolphins. There is also a large and readily observed colony of southern fur seals at the eastern edge of the town. At low tide, better viewing of the seals can be had as the ocean gives way to a rocky base which is easily navigable by foot for quite some distance.

It is also one of the best reasonably accessible places in the world to see open ocean seabirds such as albatrosses, petrels and shearwaters, including the Hutton's shearwater which nests high in Kaikoura's mountains. A strategic plan for the future of the Kaikoura coast is being developed by Te Korowai o te Tai o Marokura, the Kaikoura Coastal Guardians.

The town has a beautiful setting, as the Seaward Kaikoura mountains, a branch of the Southern Alps, come nearly to the sea at this point on the coast. Because of this, there are many walking tracks up and through the mountains. A common one for tourists is the Mt. Fyffe track, which winds up Mt. Fyffe, and gives a panoramic view of the Kaikoura peninsula from the summit.

Mt. Fyffe owes its name to the first family to settle in Kaikoura, the Fyffe family. The cottage that they lived in, built in 1842, still stands, and is now a tourist attraction operated by Heritage New Zealand. The construction of the cottage is unusual in that the supporting foundations of the house are made of whalebone. 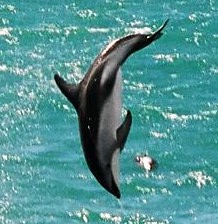 A dusky dolphin leaping near a Kaikoura beach

The town is on State Highway 1 and the northern section of the South Island Main Trunk Railway. Kaikoura also has a small sealed airstrip located 6 km south of the main centre. The Kaikoura Aerodrome is mainly used for whale spotting tourist flights but it can also be used by small private and charter flights. It previously had return flights to Wellington operated by Sounds Air.

Kaikoura is served by the Main North Line, the northern section of the South Island Main Trunk Railway. The line opened north of Kaikoura on 13 March 1944, while the line south of the town opened on 15 December 1945, the latter completing the full line Christchurch to Picton.

Kaikoura is served by the Coastal Pacific long-distance passenger train, formerly called the TranzCoastal, which connects the town with Christchurch to the south, Picton and the Cook Strait ferries to the north. Kaikoura Station was the last station in New Zealand to have a refreshment room for passengers, which closed in 1988 when the Coastal Pacific Express (former name for the TranzCoastal) introduced on-board refreshments.

Freight trains also pass through the town, mainly carrying freight between the marshalling yards at Middleton in Christchurch and the Interislander rail ferries at Picton.

All content from Kiddle encyclopedia articles (including the article images and facts) can be freely used under Attribution-ShareAlike license, unless stated otherwise. Cite this article:
Kaikoura Facts for Kids. Kiddle Encyclopedia.