Kirkham (originally Kirkam-in-Amounderness) is a town and civil parish in the Borough of Fylde in Lancashire, England, midway between Blackpool and Preston (11 miles (18 km) west of Preston) and adjacent to the smaller town of Wesham. It owes its existence to Carr Hill upon which it was built and which was the location of a Roman fort. At the census of 2011 it had a population 7,194.

In his 1878 History of the Fylde of Lancashire, John Porter described Kirkham as ".. probably the earliest inhabited locality in the Fylde district." Remains found at Carleton in the 1970s of an elk with two harpoons embedded suggest that the Fylde was inhabited as long ago as 8,000 BC.

The town is pre-Roman in its origin with a name originating from the Danish kirk (church) and -ham (Saxon for settlement, or "home"). It appears in the Domesday Book of 1086 under the name of Chicheham and is described as lying on the Roman road between Ribchester (Bremetennacum) and the River Wyre. The town's market charter was granted in 1269–70 by King Henry III.

In the 15th and 16th centuries Kirkham remained a small market town. But from the late 17th century the town grew into a thriving textile centre. From 1830 sailcloth was being woven in cottages in the town and later at the Flax Mill, built in 1861 by John Birley. Kirkham Grammar School was founded in 1549 but the original building no longer exists.

In 1792 a Roman brass shield boss was discovered by local schoolmaster John Willacy, in the Dow Brook, in Mill Hill Field. Willacy sold the shield to a Scotsman but it found its way to the Charles Townley collection in Burnley and from there to the British Museum. The oval shield, about 8 inches (20 cm) in diameter, bore the representation of a human figure, seated, with an eagle to the left and an athlete at the side.

In 1887 a memorial was erected, at Town End, to commemorate the Golden Jubilee of Queen Victoria. The memorial was later moved to a site adjacent to the United Reformed Church.

Looms ran in the town from about 1850 until 2003. At one time the town had eleven mills, the last to be built being Progress Mill in 1915. On the lower part of Station Road "The Last Loom" of Kirkham is on permanent display. This loom, a crossrod type from the 1920s, with the use of tappets at the side, could produce an extensive range of fabrics including velvets, twills and Bedford cord.

In 1925 Church Street became the subject of a pencil on paper drawing by Salford artist L. S. Lowry In his later "A Lancashire Village, 1935" he painted the scene again, but with a wider street full of people and a house in front of the church.

Due to an expansion of secondary education after the Second World War, Carr Hill Secondary Modern (now Carr Hill 11 to 18 High School and Sixth Form Centre) which was built on the site of Carr Hill House and a former racecourse opened in 1957 and was officially opened in 1958 by HRH The Duchess of Kent. Several housing developments were built on the edge of the town in the last half of the 20th Century.

Kirkham lies at the centre of a relatively rich agricultural area. By the mid 18th century, however, the manufacture of sail cloth and the flax-weaving industry had become well established in the town. By 1876 there were several factories employing almost 1,000 workers in the cotton and other industries and by the end of the century the town had grown considerably in importance.

Kirkham and Wesham railway station was opened in 1840 as "Kirkham Station", when the Preston and Wyre Railway and Harbour Company opened its line to Fleetwood. South of the town is Kirkham Prison, an open prison built on part of the site of the Royal Air Force base which closed in 1957.

The small library located on Station Road has been open since 1939 and has recently reopened following a major refurbishment. 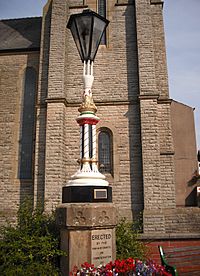 The town is served by its own free newspaper, the Kirkham and Wesham Advertiser. Both the Blackpool Gazette and the Lancashire Evening Post cover Kirkham news, as does the weekly Kirkham and Fylde Express. Regular bus services are provided by the Ribble branch of Stagecoach Buses and Coastal Coaches.

The town has been visited by a number of well-known authors who have performed book-signings at one of the town's two book shops. These have included Ranulph Fiennes, Michael Parkinson, Stacey Solomon, Michael Caine, Sarah Brown, Joanne Harris, the Wanted, Jacqueline Wilson, Jo Brand, Gervase Phinn, Al Murray, Terry Wogan, Katie Price, Jack Dee and many more. The town has a number of garages, but no longer any petrol filling station.

There are several pubs in Kirkham, six of which are within or very close to the town centre including The Post Office, The Queen's Arms, The Swan and the Stable Bar.

Kirkham Club Day, an annual gala, is held in early June, jointly with Wesham. The day involves the various churches and their chosen "Rose Queens", together with biblical tableau floats, civic dignitaries and brass bands, walking in procession through the town in the morning.

The town's War Memorial is located in a small memorial garden on Barnfield.

Kirkham currently has 20 listed buildings, one of them being Grade II* Listed and the rest being Grade II Listed. Many of the buildings in the town centre date from the Georgian and Victorian eras. 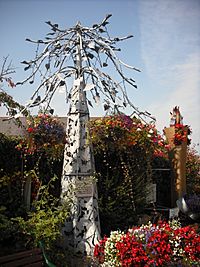 Kirkham Swimming Baths was erected in 1908 by the bequest of William Segar Hodgson J.P. and has served Kirkham as a public swimming pool for over a century. Open seven days a week, galas, free children swims and adult-only swims are regularly held. In February 2008 a campaign was initiated to save the baths from closure. This included a public march through Kirkham and Wesham on 1 March attended by some 3,000 local supporters A local action group was subsequently formed to organise the longer term survival of the baths, and was successful in presenting a business plan to Fylde Borough Council. The baths, now run by the YMCA, has been re-branded as "Rural Splash".

The town's football club is AFC Fylde. The club was known as Kirkham and Wesham F.C until the end of the 2007–08 season, and was formed by the amalgamation of Kirkham Town F.C. and Wesham F.C. The change of name to AFC Fylde was made to try to encourage a broader fan-base from across the Fylde coast.

AFC Fylde is currently based north of Wesham on the Mill Farm complex and plays in the National League. The team won the FA Vase in the 2007–08 season, beating Lowestoft Town in the final at Wembley Stadium on 11 May 2008. They were also promoted to the North West Counties Football League Premier Division after finishing second in Division Two. In 2008–09 they were North West Counties Football League champions and so won promotion to the Northern Premier League Division One North.

All content from Kiddle encyclopedia articles (including the article images and facts) can be freely used under Attribution-ShareAlike license, unless stated otherwise. Cite this article:
Kirkham, Lancashire Facts for Kids. Kiddle Encyclopedia.