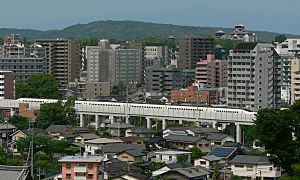 Kumamoto-shi is the capital city of Kumamoto Prefecture in Japan.

Kumamoto is in the south central part of Kyushu. Kumamoto is an ordinance-designated city since April 1, 2012.

The city's most famous landmark is Kumamoto Castle which was built in 1600, a large and in its day, extremely well fortified Japanese castle. The Castle was built by Kato Kiyomasa and the city grew around it.

All content from Kiddle encyclopedia articles (including the article images and facts) can be freely used under Attribution-ShareAlike license, unless stated otherwise. Cite this article:
Kumamoto Facts for Kids. Kiddle Encyclopedia.