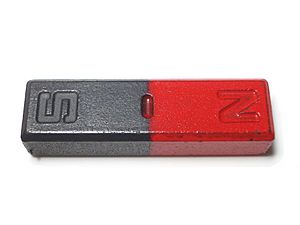 A magnet is a very special metal. When a magnet goes near a special kind of metal or other magnets, and the poles (sides) touching are opposite, it will pull, or attract the other metal or magnet closer. Also, if the two poles are the same, the two magnets will push away, or repel, from each other. This is called magnetism. Magnets can make some other metals into magnets when they are rubbed together.

Soft magnets (or impermanent magnets) are often used in electromagnets. These enhance (often hundreds or thousands of times) the magnetic field of a wire that carries an electrical current and is wrapped around the magnet. The field of the "soft" magnet increases with the current.

Permanent magnets have ferromagnetism. They occur naturally in some rocks, particularly lodestone, but are now commonly manufactured. A magnet's magnetism decreases when it is heated and increases when it is cooled. It has to be heated at around 1000 degrees Celsius. Like poles (S-pole and S-pole/N-pole and N-pole) will repel each other while unlike poles (N-pole and S-pole) will attract each other.

Natural/permanent magnets are not artificial. They are a kind of rock called lodestone or magnetite.

The first people to discover naturally magnetic rocks were the Chinese. At first, the Chinese used the stones to carry out fortune-telling and magic tricks. Later on they used these "lodestones" to invent the compass. 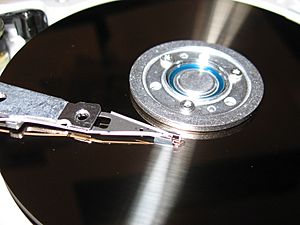 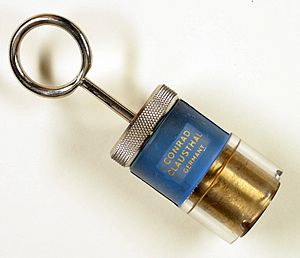 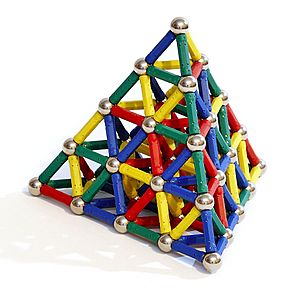 Magnets have many uses in toys. M-tic uses magnetic rods connected to metal spheres for construction. Note the geodesic tetrahedron

All content from Kiddle encyclopedia articles (including the article images and facts) can be freely used under Attribution-ShareAlike license, unless stated otherwise. Cite this article:
Magnet Facts for Kids. Kiddle Encyclopedia.