Diah Permata Megawati Setiawati Soekarnoputri (born January 23, 1947), was President of Indonesia from July 23, 2001 to October 20, 2004. She was the Indonesia's first female President, and leader born after independence. On September 20, 2004, she lost her campaign for re-election in the 2004 Indonesian presidential election. She was also the country's vice president from 21 October 1999 to 23 July 2001. She is the daughter of Indonesia's first president, Sukarno. 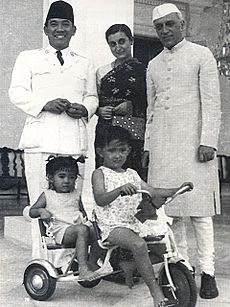 President Sukarno, with his children Megawati and Guntur, while receiving Indian Prime Minister Jawaharlal Nehru along with his daughter Indira Gandhi.

Megawati was born in Yogyakarta, Indonesia. Her father is Indonesia's first President, Sukarno, and her mother is Fatmawati, one of Sukarno's nine wives. Megawati was Sukarno's second child and first daughter. She grew up in her father's Merdeka Palace, one of Indonesia's presidential palace. She used to dance for her father's guests and had a hobby of gardening. Megawati was 19 when her father gave up his power in 1966 and was taken over by a government which was later led by President Suharto.

All content from Kiddle encyclopedia articles (including the article images and facts) can be freely used under Attribution-ShareAlike license, unless stated otherwise. Cite this article:
Megawati Sukarnoputri Facts for Kids. Kiddle Encyclopedia.