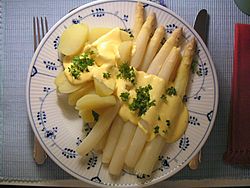 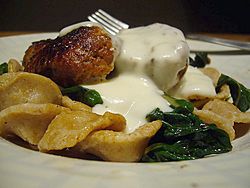 In cooking, a sauce is a liquid mixture added to another food for flavour. Sauces are not normally eaten by themselves; they add flavour, moisture, and visual appeal to another dish. Sauces are an essential element in cuisines all over the world.

The main sauces of French cuisine are built on a basis of roux, which is just flour and the liquid part of butter. Examples from Italian cuisine are the egg, cheese and ham sauce called Carbonara; the ground meat sauce called bolognese, and the herbs and garlic sauce called pesto.

Bottled sauces can be poured over food when it is served. An example would be the tomato-based sauce that is usually poured over spaghetti. Gravy is a brown sauce served with meat.

Sauce is a French word taken from the Latin salsus, meaning salted. Possibly the oldest sauce recorded is garum, the fish sauce used by the Romans.

Sauces need a liquid component, but some sauces (for example, pico de gallo salsa or chutney) may contain more solid elements than liquid.

Sauces may be used for savoury dishes or for desserts. They can be prepared and served cold, like mayonnaise, prepared cold but served lukewarm like pesto, or can be cooked like bechamel and served warm or again cooked and served cold like apple sauce.

Some sauces are commercial products like Worcestershire sauce, HP sauce, soy sauce or ketchup. In French cuisine they are freshly prepared by the chef. Sauces for salads are called salad dressing. A cook who specializes in making sauces is a saucier. 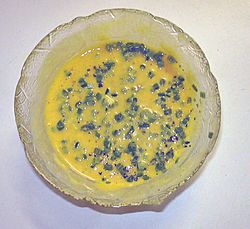 Sauces in French cuisine date back to the Middle Ages. There were hundreds of sauces in the culinary repertoire, and were a major defining characteristic of French cooking of the 19th and 20th centuries, until nouvelle cuisine.

In the 19th century, the chef Antonin Carême classified sauces into four families, each of which was based on a mother sauce (Also called grandes sauces). Carême's four mother sauces were:

In the early 20th century, the chef Auguste Escoffier updated this classification to five mother sauces. They are:

A sauce which is based on one of the mother sauces is sometimes called a small sauce, minor sauce, or secondary sauce. Most sauces commonly used in classical cuisine are small sauces, or derivatives of one of the above mentioned mother sauces.

Mother sauces are not commonly served as they are; instead they are augmented with additional ingredients to make small (derivative) sauces. For example, Bechamel can be made into Mornay by the addition of Gruyère or any cheese one may like, and Espagnole becomes Bordelaise with the addition and reduction of red wine, shallots, and poached beef marrow.

All content from Kiddle encyclopedia articles (including the article images and facts) can be freely used under Attribution-ShareAlike license, unless stated otherwise. Cite this article:
Sauce Facts for Kids. Kiddle Encyclopedia.