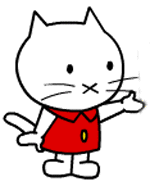 Musti is a little 4-year-old kitten, living with his mother and father in a little house in a rural village, surrounded by a large garden with animals and trees. Musti's mouth is represented as an x. Musti was first created in 1969. The character has been featured in animated TV series since then.

In 1969, Musti was developed into an animated series. In every episode, a specific story is told in a couple of minutes. The subjects are always linked to the world of small children, combining anthropomorphic animals and realistic situations. This series was first broadcast on Flemish television, with Rachel Frederix as narrator. In the Netherlands, Musti appeared on television in 1980. The narrators were Arnold Gelderman and Marijke Merckens. In the 1990s a second series was made, with a white background, with Musti's original pronunciation, Muh-sti, now changed to Moo-sti. In total, 156 episodes have been made, airing in two dozen countries.

In 2007, a new television series was created. Instead of flat 2D images with a white background, the new series is entirely rendered in 3D. The narrator is Kristel Van Craen. It airs in Belgium, the Netherlands, Israel, Norway, Japan, Croatia, Portugal and the United States on BabyFirst TV. Al-Jazeera aired the series throughout the Arabic world.

Dupuis printed a number of Musti children's comics in French, based on the character's appearances in the magazine Bonne Soirée.

Educational software programs have been developed with Musti as the lead character developed by Stefan Bracke. 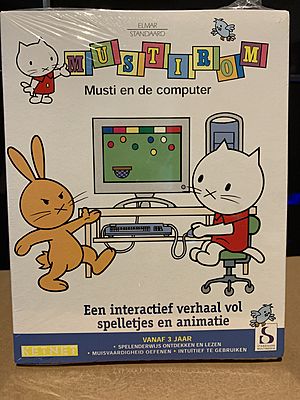 They are currently only available in Dutch.

All content from Kiddle encyclopedia articles (including the article images and facts) can be freely used under Attribution-ShareAlike license, unless stated otherwise. Cite this article:
Musti (character) Facts for Kids. Kiddle Encyclopedia.