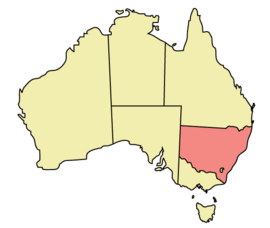 The 800,642 km2 (309,130 sq mi) of the New South Wales land mass covers a vast expanse of varying microclimates. Overall, the climate shares some similarities with the French wine region of the Languedoc. The Great Dividing Range has a substantial influence on the climate of many of New South Wales' viticultural areas with areas of higher elevation, such as Orange, Canberra District and Hilltops have cooler climates with more continental influences. The Hunter Valley is very warm, with high humidity and a large amount of rainfall during the growing and harvest season. The Mudgee and Cowra regions and the Big Rivers zone are warm and much drier than the Hunter Valley with several areas requiring irrigation for grape growing.

The soils of New South Wales are similar varied with clay, loam and sandstone being the most common. The Lower Hunter region has several locations with volcanic loam with alluvial sands and silts on the flatter valley vineyards. The Tumbarumba region in the south has souls of basalt and granite with the Hilltops region also having granite based soils with mixtures of basalt and gravels.

According to the writings of Watkin Tench, the very first Australian vineyard was planted in New South Wales in 1791 with vines from settlements in South Africa. The vines were planted in the garden of Arthur Phillip, then Governor of the colony, in a site that is now the location of a hotel on Macquarie Street in Sydney. Phillip's early vineyard did not fare well in the hot, humid climate of the region and he sent a request to the British government for assistance in establishing viticulture in the new colony. The government responded by sending two French prisoners of war, under the assumption that all French citizens must know something about making wine. However, neither men had any viticultural training and the most they were able to produce was peach cider.

In 1824, James Busby was awarded a land grant for 800 hectares (1,980 acres) along the Hunter River which he planted with grapevines, studying the techniques that he would include in his 1830 book A Manual of Plain Directions for Planting and Cultivating Vineyards and for Making Wine in New South Wales. In 1831, Busby toured Europe and collected over 600 vine samples from across the continent and shipped them back to Sydney. Many of these vines survived the trip and were cultivated in New South Wales and from there spread across Australia, introducing new varieties to the land. By the mid 19th century, the wine industry of New South Wales was thriving. In 1855, a sparkling wine from the region was featured at the Paris Exposition Universelle, the same exposition that introduced the Bordeaux Wine Official Classification of 1855. The wine was well received and won the honour of being served during the event's closing ceremonies at the state banquet of Napoleon III.

All content from Kiddle encyclopedia articles (including the article images and facts) can be freely used under Attribution-ShareAlike license, unless stated otherwise. Cite this article:
New South Wales wine Facts for Kids. Kiddle Encyclopedia.