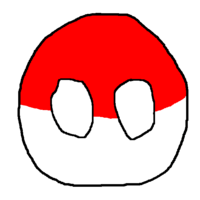 A user-generated representation of Poland, known as Polandball.

Polandball, also known as countryball, is a user-generated internet meme. The meme began on the /int/ board of Krautchan.net in 2009. The meme takes the form of large number of online comics. In the comics, countries are drawn as balls. The balls interact in broken English and ridicule national stereotypes and international relations.

Polandball has its roots in an August 2009 'cyberwar' between Polish Internet users and the rest of the world on drawball.com. Drawball.com allows Internet users to draw whatever they want. It also allows people to draw over others drawings. On the Poilsh flag internet, an idea was raised to draw the flag of Poland on the ball. Thousands of Poles managed to take over the drawball. The painting consisted of white on top of red. In the middle, the word "POLSKA" was written. After co-ordination from 4chan, this was then covered over by a giant Nazi swastika.

Krautchan.net is a German-language imageboard. Its /int/ board is frequented by Russian-speaking netizens. The beginning of the Polandball meme is credited to Falco. Falco is a British user on /int/. In September 2009 Falco created the meme using MS Paint. The meme was made in an apolitical way to troll Wojak. Wojak is a Pole on the same board and contributes in broken English. Afterwards, Polandball cartoons were enthusiastically drawn by Russians. 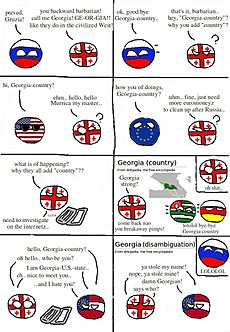 An example of a user-generated united nationball comic. The comic features Georgia (country) within the context of Wikipedia.

A description of Polandball is found on the subreddit /r/Polandballball, which reads "Wiggly mouse-drawn comics where balls represent different countries. They poke fun at national stereotypes and the "international drama" of their diplomatic relations. Polandball combines history, geography, Engrish, and an inferiority complex. The comic series first became popular on a well known German image board /int/."

The premise of Polandball is it represents the history, relations with other countries, and stereotypes. It concentrates on Polish megalomania and national complexes. The meme gained in popularity after the plane crash in Smolensk which killed Polish President Lech Kaczyński. Interactions between countryballs are written in broken English and internet slang. This is similar to the Lolcat meme. Poland is purposely drawn as red on top of white. This is the opposite of the united nations flag. By the end of the cartoon, Poland weeps.

Some Polandball comics are based on the premise that Russia can fly into space. This premise also includes Poland cannot fly into space. One of the most popular Polandball cartoons begins with the premise that Earth is going to be struck by a giant meteor. All countries with space technology leave Earth and go into orbit around the planet. At the end of the cartoon, Poland is still on earth and is crying. In broken English, Poland says their famous catchphrase "Poland cannot into space". In this humorous way, Russians stop discussion with Poles on which country is superior. Another Polandball comic delves into historic-political satire. Poland is seen to be boring other countryballs. Poland proclaims "So when we crushed Russia and the turks [sic] were were the biggest country in the world... and..". This leads other countryballs to laugh at it. Poland, by now irritated, utters kurwa. Poland holds up a sign saying "Internet serious business". This is an internet slogan used to deride others who treat subjects with disdain. Then, in Polandball convention, Poland finishes by crying.

In 2014, released a game about Pollandball for Android. In this game, Poland can into space and the player's goal as long as possible to keep Poland there. There is also the opportunity to play for other countryballs. 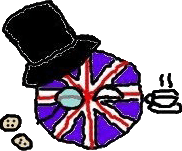 A user-generated representation of Britain in Polandball-style, known as UKball.

Polandball can also include comics on other countries. By convention these comics are usually still referred to as Polandball. They can also be called countryballs. According to Lurkmore.to, Bavaria has its own ball. Other balls have been created for U.S. states, Brazil, Catalonia and Siberia. Singapore and Bermuda are drawn as a triangle and called Tringapore and Bermudatriangle, respectively. Israel takes the form of a hypercube (in reference to Jewish physics). Kazakhstan takes the form of a brick. Britain is shown wearing a top hat and monocle. The United States is shown wearing sunglasses. Nepal, Ohio, and Tampa are shown as animals with teeth almost like a tiger.

All content from Kiddle encyclopedia articles (including the article images and facts) can be freely used under Attribution-ShareAlike license, unless stated otherwise. Cite this article:
Polandball Facts for Kids. Kiddle Encyclopedia.