Princess Beatrice of York (Beatrice Elizabeth Mary; born 8 August 1988) is a member of the British royal family. She is the elder daughter of Prince Andrew, Duke of York, and Sarah, Duchess of York. A granddaughter of Queen Elizabeth II, she is currently eighth in line to the throne.

Beatrice was born on 8 August 1988, at 8:18 pm at The Portland Hospital for Women and Children, the first child of the Duke and Duchess of York, and fifth grandchild of Queen Elizabeth II and Prince Philip, Duke of Edinburgh. She was baptised in the Chapel Royal at St James's Palace on 20 December 1988, her godparents being: Viscount Linley (her father's cousin, now the 2nd Earl of Snowdon); the Duchess of Roxburghe (now Lady Jane Dawnay); Peter Palumbo; Gabrielle Greenall; and Carolyn Cotterell. Her name, an unexpected choice, was not announced until almost two weeks after her birth.

Beatrice began her early education at the independent Upton House School in Windsor, in 1991. From there, she and her sister both attended the independent Coworth Park School from 1995.

Beatrice continued her education at the independent St George's School in Ascot, where she was a pupil from 2000 to 2007. Beatrice was diagnosed with dyslexia at the age of seven and went public with the diagnosis in 2005. Having been diagnosed with dyslexia as a child, she delayed sitting her GCSE exams for one year. She remained at St George's to take her A-Levels, gaining a grade A in drama, and B grades in history and film studies. She was elected Head Girl in her final year, and was a member of the school choir.

In September 2008, she started a three-year course studying for a BA in History and History of Ideas at Goldsmiths College, London. Princess Beatrice graduated in 2011 with a 2:1 degree.

In an interview to mark her 18th birthday, Princess Beatrice said that she wanted to use her position to assist others through charity work; she had already undertaken charitable duties alongside her mother through the various organisations the Duchess supported. In 2002, Beatrice visited children living with HIV in Russia, and, in Britain, she supported Springboard for Children (a literacy project for primary-school children with learning difficulties) and the Teenage Cancer Trust. During the summer of 2008, Beatrice volunteered as a sales assistant at Selfridges, and it was reported Beatrice and a friend had plans to find a fashion label. She also worked at the Foreign Office's press office for a period of time without receiving a salary. It was also reported in 2008 that the Princess was interested in pursuing a career at the Financial Times website.

The Princess celebrated her 18th birthday with a masked ball at Windsor Castle in July 2006. Beatrice was the first member of the family to appear in a non-documentary film when she had a small, non-speaking role as an extra in The Young Victoria (2009), based on the accession and early reign of her ancestor, Queen Victoria. In April 2010, running to raise money for Children in Crisis, she became the first member of the royal family to complete the London Marathon. Princess Beatrice is the patron of Forget Me Not Children's Hospice, which supports children with life-shortening conditions in West Yorkshire and North Manchester. In April 2015, it was reported that Beatrice had decided to move to New York City. As of April 2017, the Princess has a full-time job and spends her time between London and New York City.

According to a tabloid press report, Beatrice accidentally cut Ed Sheeran's cheek in November 2016 with a ceremonial sword during a mock knighting of James Blunt. Blunt later claimed that the story had been fabricated. 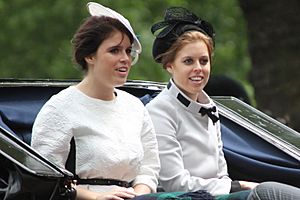 Princess Beatrice (right) with her sister Princess Eugenie of York at Trooping the Colour, June 2013

At the wedding of her cousin Prince William, Beatrice's fascinator designed by Philip Treacy was remarked upon by some as an odd choice of fashion. In May 2011, the hat was offered for sale on the internet auction site eBay with the proceeds going to charity: it was sold for £81,000 with the money split between UNICEF and Children in Crisis.

Princess Beatrice accompanied her grandmother, the Queen, to the traditional Royal Maundy services on 5 April 2012 in York. She and the Duke of Edinburgh were the sole members of the royal family to attend the Maundy Thursday services at York Minster with the Queen. There, Beatrice interacted with parishioners, received flowers from the public, and assisted the Queen as she passed out the official Maundy money to the pensioners. In the lead up to the 2012 Summer Olympics Princess Beatrice welcomed the Olympic flame on the steps of Harewood House near Leeds. In 2013, Beatrice and her sister promoted Britain overseas in Germany. She also visited the Isle of Wight in 2014, whose governor was Beatrice's namesake Princess Beatrice, daughter of Queen Victoria.

In November 2012, Beatrice became a patron of the York Musical Society. In April 2013, she became royal patron of the Helen Arkell Dyslexia Centre, a charity that she credits with helping her overcome her own academic challenges resulting from dyslexia. She accompanied her father during an official engagement in the United Arab Emirates on 24 November 2014. 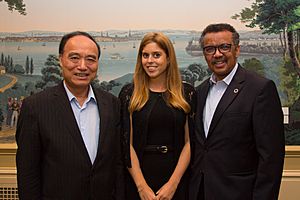 In 2016, Beatrice along with her mother Sarah, Duchess of York, and sister Eugenie collaborated with British contemporary artist Teddy M to create the first ever royal graffiti. The painting on canvas, titled Royal Love, was painted at Royal Lodge and exhibited in London prior to being sold for a five figure sum. Proceeds from the sale of the painting were donated to Children in Crisis. The Princess is also a supporter of the Pitch@Palace initiative, a charity founded by her father to support entrepreneurs with the amplification and acceleration of their business ideas. In October 2016, rumors of a rift between Prince Andrew and Prince Charles over the future roles of Beatrice and Eugenie were widely reported in the media. The Duke of York subsequently issued a statement describing the story as "complete fabrication".

Beatrice is the founder of Big Change, a charity that she established together with six of her friends with its main goal being encouraging young people to develop skills "outside a traditional academic curriculum". In 2012, she climbed Mont Blanc in aide of the charity, and together with Richard Branson and his children participated in the fundraising challenge Virgin Strive Challenge in 2016 which involved climbing Mount Etna.

In 2017, the Princess helped promote the anti-bullying book Be Cool Be Nice, and gave an interview to Vogue at a House of Lords event, speaking about her own experiences with being bullied for her fashion choices in her early adulthood.

In March 2019, Beatrice attended a fundraising event at the National Portrait Gallery, London, accompanied by property developer Edoardo Mapelli Mozzi, the son of Alex Mapelli-Mozzi, a former British Olympian and descendant of the Italian nobility; the BBC describes Edoardo as "also a count", like his father. The couple are believed to have begun dating in 2018. Together, they attended the wedding of Lady Gabriella Windsor, Beatrice's second cousin once removed. They became engaged in Italy in September 2019, with their engagement formally announced by the Duke of York's Office on 26 September.

The wedding was scheduled to take place on 29 May 2020 at the Chapel Royal at St James's Palace, followed by a private reception in the gardens of Buckingham Palace, but first the reception and then the wedding itself were postponed due to the COVID-19 pandemic. The wedding was eventually held in private on 17 July 2020, at the Royal Chapel of All Saints, Royal Lodge, Windsor, and was not publicly announced in advance. Beatrice's father walked her down the aisle. She wore the Queen Mary Fringe Tiara that was also worn by the Queen at her own wedding, and a remodelled Norman Hartnell dress that was loaned by the Queen.

Princess Beatrice has a stepson, Christopher Woolf (born 2016), her husband's child from a relationship with architect Dara Huang.

All content from Kiddle encyclopedia articles (including the article images and facts) can be freely used under Attribution-ShareAlike license, unless stated otherwise. Cite this article:
Princess Beatrice of York Facts for Kids. Kiddle Encyclopedia.