Protected areas of the United States facts for kids 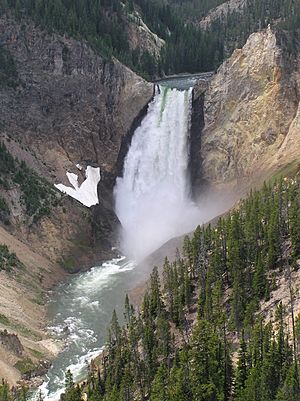 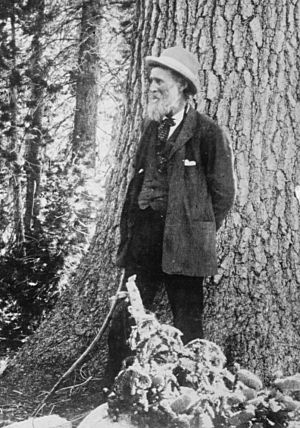 John Muir (1838-1914), one of the main inspirations for the U.S. national park system.
"Why should man value himself as more than a small part of the one great unit of creation ?" - John Muir.

Federal protected areas include lands and waters owned outright ("Fee ownerships"), as well as areas that are secured by easements, leases, etc. In addition to ownership-defined areas, there are numerous overlaying policy designations that apply management protections and use conditions on all or some of individual protected areas (e.g., Wilderness Areas, National Monuments, etc.).

The highest levels of protection, as described by the International Union for Conservation of Nature (IUCN), are Level I (Strict Nature Reserves & Wilderness Areas) and Level II (National Parks). The United States maintains 12 percent of the Level I and II lands in the world. These lands had a total area of 210,000 sq mi (540,000 km2).

Because U.S. federal protected areas include both ownership based names, and names related to overlaying policy designations, the naming system for U.S. protected areas results in some types being used by more than one agency. For instance, both the National Park Service and the U.S. Forest Service manage areas designated National Preserves and National Recreation Areas. The National Park Service, the U.S. Forest Service, and the Bureau of Land Management manage areas called national monuments. National Wilderness Areas are designated within other protected areas, managed by various agencies and sometimes wilderness areas span areas managed by multiple agencies.Those relying on U.S. protected areas data are advised to learn more about all of these conventions by reviewing the extensive PAD-US Help system.

There are existing federal designations of historic or landmark status that may support preservation via tax incentives, but that do not necessarily convey any protection, including a listing on the National Register of Historic Places or a designation as a National Historic Landmark. States and local zoning bodies may or may not choose to protect these. The state of Colorado, for example, is very clear that it does not set any limits on owners of NRHP properties.

Every state has a system of state parks as well as many other types of protected areas (forests, reserves, refuges, recreation areas, etc.). State parks vary widely from urban parks to very large parks that are on a par with national parks. Some state parks, like Adirondack Park, are similar to the national parks of England and Wales, with numerous towns inside the borders of the park. About half the area of the park, some 3,000,000 acres (1,200,000 ha), is state-owned and preserved as "forever wild" by the Forest Preserve of New York. Wood-Tikchik State Park in Alaska is the largest state park by the amount of contiguous protected land; it is larger than many U.S. National Parks, with some 1,600,000 acres (650,000 ha), making it larger than the state of Delaware. Many states also operate game and recreation areas.

U.S. counties, cities and towns, metropolitan authorities, regional park systems, recreation districts and other units manage a wide variety of local public parks and other protected areas. Some of these are little more than picnic areas or playgrounds; however, others are extensive nature reserves. South Mountain Park in Phoenix, Arizona, for example, is called the largest city park in the United States; it spans 25 sq mi (65 km2) and contains 58 mi (93 km) of trails.

All content from Kiddle encyclopedia articles (including the article images and facts) can be freely used under Attribution-ShareAlike license, unless stated otherwise. Cite this article:
Protected areas of the United States Facts for Kids. Kiddle Encyclopedia.