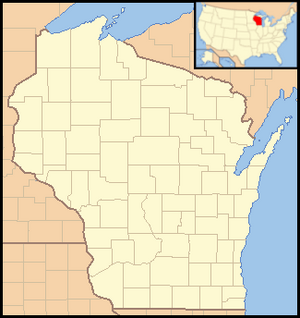 Map of State Parks of Wisconsin
Hold cursor over locations to display park name;
click to go to park article.

Wisconsin became the first state to have a state park in 1878 when it formed "The State Park". The park consisted of 760 square miles (2,000 km2) in northern Wisconsin (most of Vilas County). The state owned 50,631 acres (205 km2), which was less than 10% of the total area. There were few residents in the area. Lumber barons were powerful in the area, and they purchased 2/3 of the state's land at $8 per acre. This defeated the purpose of the parks for it didn't save the land from the ax.

In 1895, the state legislature created an act which authorized the state governor to examine some land in Polk County at the Dalles of the St. Croix River to become a state park. In 1899, the legislature approved the purchase of Interstate State Park and it was established on September 20, 1900. Architect John Nolen was hired in 1907 to draft a feasibility plan for a Wisconsin State Parks System and State Parks for Wisconsin was released later that year. The report was the guideline used to set up the state park system. It recommended the creation of four state parks: Dells of the Wisconsin River, Devil's Lake, Door County's Fish Creek (now Peninsula State Park) and the confluence of the Mississippi and Wisconsin Rivers (now Wyalusing State Park). Three became state parks, and the fourth became Dells Natural Area in 2005. A State Conservation Commission was formed in 1915 by combining the State Park Board, the State Board of Forestry, the Fisheries Commission, and the state Game Warden Department.

All content from Kiddle encyclopedia articles (including the article images and facts) can be freely used under Attribution-ShareAlike license, unless stated otherwise. Cite this article:
List of Wisconsin state parks Facts for Kids. Kiddle Encyclopedia.