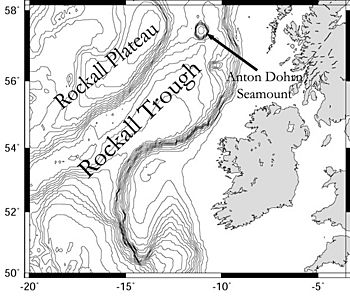 Bathymetric features to the northwest of Scotland and Ireland 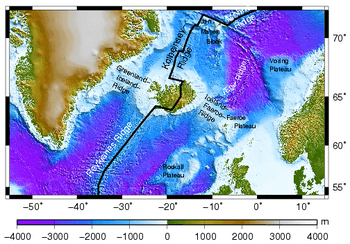 The Rockall Trough (Scottish Gaelic: Clais Sgeir Rocail) is a deep-water bathymetric feature to the northwest of Scotland and Ireland, running roughly from southwest to northeast, flanked on the north by the Rockall Plateau and to the south by the Porcupine Seabight. At the northern end, the channel is bounded by the Wyville-Thomson Ridge, named after Charles Wyville Thomson, professor of zoology at the University of Edinburgh and driving force behind the Challenger Expedition. At the southern end, the trough opens into the Porcupine abyssal plain. The Rockall Basin (also known as the Hatton Rockall Basin) is a large (c. 800 km by 150 km) sedimentary basin that lies beneath the trough. Both are named after Rockall, a rocky islet lying 301.4 km west of St Kilda.

In February 2000, the RRS Discovery, a British oceanographic research vessel sailing in the Rockall Trough encountered the largest waves ever recorded by scientific instruments in the open ocean, with a SWH of 18.5 metres (61 ft) and individual waves up to 29.1 metres (95 ft).

The nature of the crust beneath the Rockall Trough has long been a matter of debate. Originally thought to be oceanic crust it is now generally considered to be highly stretched continental crust, although some groups of researchers continue to favour either oceanic or transitional style crust, particularly at the southern end of the basin.

The Rockall Basin forms part of a chain of highly extended Mesozoic rift basins between the Charlie-Gibb and Senja Fracture Zones, that includes; the Faroe-Shetland Basin, the Møre Basin, and the Vøring Basin. There are indications that the Rockall Basin developed within an earlier rift system, which is likely to be of Triassic to Middle Jurassic in age, by analogy with the nearby Slyne-Erris Basins. The age of the main rift phase in the Rockall Basin is strongly debated, with Late Jurassic, Early-, Mid- and Late Cretaceous all being suggested.

One of the features of the Rockall Trough is the Anton Dohrn Seamount. It lies 600 metres (2,000 ft) beneath the surface, rising 1,500 metres (4,900 ft) from the surrounding seabed. The plateau formed approximately 55 million years ago, a continental fragment formed between Greenland and Europe when the ancient continent of Laurasia was split apart by plate tectonics. The Rockall Islet is the highest point of the plateau, rising 21 m above sealevel. It is made of a type of peralkaline granite.

To date, there has been comparatively little drilling to explore for oil and gas within the Rockall Basin and only two discoveries have been made, Benbecula in the northern UK Rockall (Shell originally Enterprise Oil) and Dooish in the northern Irish Rockall (Shell originally Enterprise Energy Ireland). The discoveries show that, at least locally, there is a working petroleum system. Rights to exploit these resources are disputed between the United Kingdom, Ireland, Iceland and the Faroe Islands (a possession of Denmark). This topic is addressed in Rockall Bank dispute.

The area supports cold water coral colonies and carbonate mound fields such as the Logachev Mounds; the trough supports a rich deep sea fish population. There are also unusual aggregations of deep-sea sponges, in particular the encrusting sponge and bird’s nest sponge. A range of other species are found amongst the sponges beds, which are considered biodiversity hotspots. For the bird’s nest sponge associated species include ascidians, Foraminifera, polychaetes and burrowing anemones, whilst for the encrusting sponge beds species such as anemones, ascidians, crinoids and ophiuroids are found. The area is also home to brittlestars: filter feeders which live on the seabed.

In 2014 an area of 1,256 square kilometres (485 sq mi) of the Hatton-Rockall Basin was declared a Nature Conservation Marine Protected Area. The MPA is designated a Category IV protected area by the International Union for Conservation of Nature.

All content from Kiddle encyclopedia articles (including the article images and facts) can be freely used under Attribution-ShareAlike license, unless stated otherwise. Cite this article:
Rockall Basin Facts for Kids. Kiddle Encyclopedia.