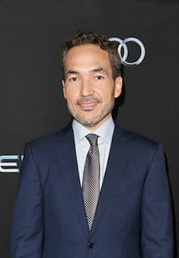 Steve Jablonsky (born on October 9, 1970) is an American music composer for movies, television and video games.

Jablonsky has composed the soundtracks to the movies Steamboy (2004), The Island (2005), Transformers (2007) and D-War (2007). He also helped compose some of the music to the video game Metal Gear Solid 2: Sons of Liberty, and composed the theme music for the BBC's Seven Wonders of the Industrial World in 2003. He continues to write music for the television series Desperate Housewives (2004-current) since the fourth episode.

All content from Kiddle encyclopedia articles (including the article images and facts) can be freely used under Attribution-ShareAlike license, unless stated otherwise. Cite this article:
Steve Jablonsky Facts for Kids. Kiddle Encyclopedia.