Warminster Township (a.k.a. Warminster) is located in Bucks County, Pennsylvania, United States and was formally established in 1711. It is 3.7 miles northwest of Philadelphia and had a population of 32,682 according to the 2010 U.S. census.

The town was called Warminster Township as early as 1685, before its borders were formally established in 1711. It was originally part of Southampton Township, which was founded in 1682 by William Penn. Warminster was named after a small town in the county of Wiltshire, at the western extremity of Salisbury Plain, England. Warminster, Pennsylvania was mostly settled by English and Scotch-Irish after William Penn received a grant of land in the area from King Charles, II.

Warminster began as a small farming community and remained that way throughout most of its history. As recently as 1955, the township had no residential subdivisions and only one housing complex, Lacey Park on Street Road, the site where the Battle of Crooked Billet occurred during the Revolutionary War that resulted in a resounding defeat for George Washington's troops.

Warminster's Naval Air Warfare Center, previously called the Johnsville Naval Air Development Center and then the Naval Air Development Center, operated from World War II until it closed in 1996. Its site was acquired by the U.S. Navy from the Brewster Aeronautical Corporation in 1943. The Center initially served as a weapons development and airplane testing facility. It then became a training center for the Mercury, Gemini, and Apollo space programs. The facility developed a prototype "black box," best known as the indestructible recorder of cockpit conversations and information in the event of a crash.

Warminster Township is 3.7 miles northwest of Philadelphia at their closest points and has a total area of 10.2 square miles (26.5 km²), all of it land. Warminster is drained by the Delaware River tributaries of the Neshaminy Creek and the Pennypack Creek.

The climate in this area is characterized by hot, humid summers and generally mild to cool winters. According to the Köppen Climate Classification system, Warminster has a humid subtropical climate, abbreviated "Cfa" on climate maps.

The census figures were updated in 2010.

Warminster Township's Recreation Services Division provides many events and community services, including overseeing and maintaining 420 acres of recreation areas within 13 parks. Warminster Community Park is the largest at 240 acres, with over five miles of trails. Small neighborhood parks make up the bulk of the others. Sports teams, including soccer, football, basketball, swimming, wrestling, baseball, and softball, are provided by various adult and youth sports organizations throughout their respective seasons. The township is also home to the best-reviewed public golf course in Bucks County. 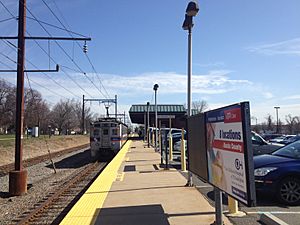 Warminster Station, which serves as the terminus of SEPTA's Warminster Line

All content from Kiddle encyclopedia articles (including the article images and facts) can be freely used under Attribution-ShareAlike license, unless stated otherwise. Cite this article:
Warminster Township, Bucks County, Pennsylvania Facts for Kids. Kiddle Encyclopedia.