Woodford is a suburban village in the Metropolitan Borough of Stockport in Greater Manchester, England. It lies 5.2 miles (8.4 km) south of Stockport, 5.7 miles (9.2 km) north-northwest of Macclesfield, and 10.7 miles (17.2 km) south-southeast of Manchester. Woodford is the most southerly point of Greater Manchester and consists of a ribbon of properties along the A5102 road, around which is open countryside.

Historically part of Cheshire, throughout the Middle Ages Woodford was a hamlet in the parish of Prestbury. It was incorporated into the Urban District of Hazel Grove and Bramhall in 1939 and the Metropolitan Borough of Stockport in 1974. Woodford Aerodrome was opened in 1924 by Avro and produced aircraft such as the Avro Lancaster in World War II. It closed in 2011 and was demolished in 2015.

In 1248, the manor of Woodford was one of several in the Barony of Stockport. Land was cleared and improved for agriculture in the late 13th century and a cornmill existed by 1296. The barony shrank during the 14th century, and in 1355 land at Woodford was granted to the Davenport family. At this time Woodford was a hamlet on the edge of the Macclesfield Forest.

The Davenports are known to have extended the old hall at least once, and built the New Hall in the early 17th century. The exact building date is unknown, a lintel is inscribed '1630', but the building may have existed a few years earlier. The hall is the earliest surviving brick building in the area. The Davenports left the area for the considerably grander Capesthorne in the early 18th century, following a marriage described by Arrowsmith as "fortuitous".

Also referred to as 'Dain' and 'Dane'. 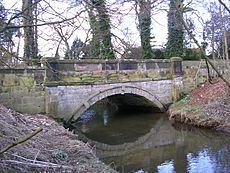 The River Dean marks the post-1974 county boundary between Cheshire and Greater Manchester. The A5102, Wilmslow Road, crosses the river at the Deanwater bridge. It was at the crossing that James Andrew of Compstall Bridge built the Dean Water calico printing mill in 1837, possibly on the site of an earlier calico printing mill. Deanwater House was built as the manager's house. The mill closed in 1848. It was bought and resold to the Davenports on the conditions that it was demolished. It was a sizeable concern employing 172 people, of which half lived in the parish of Woodford. It was driven by water with a supplementary 25 hp steam engine. It burnt down in 1851.

James Andrew built up to 40 cottages for his workforce on King Street, and showed in interest in the building of the parish church of Christ Church. Christ Church was built in 1841 but not consecrated until 29 July 1872. The Methodist Chapel, Dean Row, on the other bank of the River Dean was opened in 1839. There was a Baptist chapel in Woodford.

A school was built in 1847 at the instigation of the Bromley-Davenport family. It was a junior school. The senior school, for the few who went, was in Wilmslow. The population of Woodford in 1848 was 564.

Deanwater house continued to have textile connections. Robert Platt was living at Deanwater in 1851. He was a cotton spinner from Stalybridge, who used to host annual parties for his 900 operatives and families, laying on a special train to bring them. Robert Platt moved to Dunham Massey Hall. James Butler Kelly lived in Deanwater around 1881. He had been born in Wakefield, Yorkshire and was the Bishop of Newfoundland. Then in 1891, Charles Edmondson, an engraver, and his family were the occupants of Deanwater. This calico printer had a wife and four children and employed four servants. Deanwater is now a hotel.

Woodford Aerodrome was a factory and large airfield south of the village. The airfield was created from farmland by Avro during late 1924 following their eviction from Alexandra Park in Manchester. The first recorded air display was in 1925. Avro became a part of the Hawker Siddeley Group in the mid-1930s, and several new buildings were erected prior to the start of the Second World War. The major project during the mid-1930s to early wartime was the building of many thousands of twin-engined Avro Ansons for use as patrol aircraft, trainers and light transports.

The early part of the war saw a production run of 200 Avro Manchester bombers. The unreliability of their twin Rolls Royce Vulture engines prompted the development of the Avro Lancaster, powered by four Rolls Royce Merlins. Over 4000 Lancasters were assembled at the plant and these formed the backbone of RAF Bomber Command.

The Lancasters were followed by Lincoln bombers and then from 1949 the Shackleton maritime reconnaissance aircraft. The delta-winged Vulcan four-jet nuclear bomber rolled from the Woodford factory between the mid-1950s and early 1960s. Vulcan B2 XM603 is preserved at the airfield for static show purposes. From 1960 onwards, a series of civil airliners was built at Woodford, starting with the HS 748, then the BAe ATP, followed by the BAe 146 jet airliner. In the 2000s the Nimrod reconnaissance plane has been assembled at the plant.

From 1968 to 2000 an annual air show was held at the Aerodrome, organised by the Royal Air Forces Association. Now, as part of BAE Systems Regional Aircraft, the airfield is the site of the company's Customer Training and Engineering department.

In 1989, 3000 people were employed on the site. On 3 April 2008 BAE Systems announced it would be losing 134 jobs from the Woodford site. On 15 September 2009 BAE announced that the site would close in 2012, with the loss of the final 630 jobs. The site has now been demolished; however, the old Fire station has been re purposed into a Museum which honours the heritage of various Avro aircraft that were built on the site. As of June 2016 there are the following exhibits present: Avro Vulcan XM603, Nose section of a Canberra bomber which was built on the site and the Museum is expecting delivery of a VC10 nose section, although not an Avro or Woodford design, the VC10 spent many years at woodford as the site was used as a base for maintenance for its air to air refuelling program.

Woodford forms a semi-rural area of mostly ribbon developments. The village has an open level aspect to it, most of the village is between 90 metres (300 ft) and 95 metres (312 ft) above mean sea level. This is due to being 5 kilometres (3.1 mi) west of the Red Rock Fault at Poynton where the millstone grits and coal measures of the Carboniferous period, made a 200 metres (660 ft) downfall, to be covered with glacial tills. The soils of Woodford consist of clay. It is close to the South Pennines and the Peak District. Forming the most southern point of Greater Manchester, the River Dean marks the border with Cheshire. To Woodford's north and northwest are the M60 and M56 motorways, providing road links to the rest of North West England. 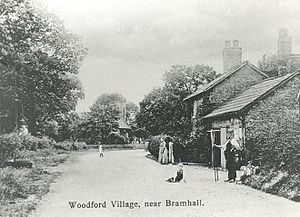 Chester Road, Woodford in 1904. In the distance is Christ Church

Woodford Christ Church was completed in 1841 as a chapel of ease to Prestbury. It is built of brick with stone used only for windows and other architectural features. A district chapelry was assigned to the church in 1873 which meant that Christ Church became a separate parish.

Woodford does not have its own railway station, with the nearest being Bramhall and Poynton. However, there are bus links provided to Bramhall, Stockport and Manchester, from a terminus situated next to the Davenport Arms public house. A regular service numbered X57 runs to Manchester every 30 minutes via Bramhall, Cheadle, and Didsbury, and two journeys on service 390 run from Bramhall to Stockport via Woodford, Poynton, Hazel Grove and Offerton. A school service numbered 877 also runs to Bramhall High School from Grove Lane in Cheadle Hulme, via Woodford. All bus services in Woodford are provided by Stagecoach Manchester.

All content from Kiddle encyclopedia articles (including the article images and facts) can be freely used under Attribution-ShareAlike license, unless stated otherwise. Cite this article:
Woodford, Greater Manchester Facts for Kids. Kiddle Encyclopedia.