Wilmslow is a town and civil parish in Cheshire, England, that is 11 mi (18 km) south of Manchester. The area, which lies between Handforth and similarly affluent Alderley Edge, is known for its upmarket lifestyle and its many rich and famous residents. It is one of the most sought-after places to live in the UK after central London, and falls within the Cheshire Golden Triangle. It has one of the highest proportions of wealthy residents in the North of England. The town has boutique shops, cafes and restaurants, and high-marque car showrooms which cater for those associated with the "Cheshire Set" lifestyle.

The population of Wilmslow was 30,326 in the 2001 Census, reducing to 24,497 at the 2011 Census due to the separation of Handforth to form its own parish. The town is in the parliamentary constituency of Tatton, represented by George Osborne MP.

Much about the local Iron Age history of Wilmslow was uncovered with the discovery of Lindow Man, in Lindow Moss. Preserved in the peat bogs for 2000 years, Lindow Man is one of the most important Iron Age finds in the country. Despite a campaign to keep Lindow Man in the area, he was transferred to the British Museum and is a central feature of the Iron Age exhibition. Lindow Man returned to Manchester Museum in April 2008 for a year-long exhibition.

Wilmslow was in the international media in March 1997, when an IRA bomb exploded near the railway station damaging signalling equipment. The original IRA message was confusing and led to the evacuation of the Wilmslow Police Station to the local leisure centre not far from the explosion. Nobody was hurt.

In the general election of the same year, the parliamentary constituency of Tatton, in which Wilmslow falls, made headlines as part of the "sleaze" accusations levelled against the then Conservative Government. Tatton MP, Neil Hamilton, was accused of accepting cash for tabling Parliamentary questions, and subsequently defeated in the election by independent candidate Martin Bell. Bell was supported in his door to door canvasing for votes by David Soul and served a single term as MP.

Wilmslow held its first Scarecrow Festival in July 2010 with 85 local businesses taking part and 93 different scarecrows. Organised by the Rotary Club of Wilmslow Dean and the members of the Wilmslow Business Group, the week-long festival has transformed the town centre and received a tremendous response.

Wilmslow was one of the eight ancient parishes of the Macclesfield Hundred of Cheshire. It was subdivided into the townships of Bollinfee, Chorley, Fulshaw and Pownall Fee. Under the Poor Law Amendment Act 1834 the townships became civil parishes in their own right. Wilmslow was recreated as a civil parish on 30 September 1894 when Pownall Fee and Fulshaw were abolished. Wilmslow gained the whole of Fulshaw and part of Pownall Fee; the other 1,523 acres (6.16 km2) of Pownall Fee were used to create the new Styal civil parish. The Wilmslow Urban District Council came into being in 1895 consisting only of the previous civil parish of Wilmslow. On 21 June 1951 it was granted its own Coat of Arms. On 1 April 2009 it became part of the Cheshire East unitary authority. 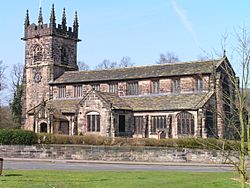 A breakdown of religious groups and denominations:

There are three Church of England churches in Wilmslow, St. Bartholomew's, St Anne's and St John's. St Bartholomew's is a 16th-century building, which was modified in the 19th century. It has a turreted bell tower.

The Sacred Heart & St Teresa's Church is the Roman Catholic church and dates from the late 19th century.

Dean Row Chapel, 2 miles (3.2 km) east of the town centre, is a Grade II* listed building built around the end of the 17th century. Initially Presbyterian, it is now a Unitarian chapel.

Situated in the north of England, 11 miles (18 km) from Manchester city centre and 7 miles (11 km) from Macclesfield, Wilmslow town centre is focused upon Bank Square, Grove Street and Water Lane. Although Bank Square has traditionally provided the location for many of the town's banks, the name in fact originates from the bank, or slope, leading down to The Carrs recreational fields and up towards the railway station. The River Bollin flows through The Carrs and once provided the power source for nearby Quarry Bank Mill, now a National Trust site, and enjoyment for the local population.

Before the railway came in 1842, Wilmslow comprised only a few farms and a church.

For purposes of the Office for National Statistics, Wilmslow forms part of the Greater Manchester Urban Area.

The town is served by a number of bus services:

Evening and Sunday journeys on the 378 were curtailed to operate between Stockport - Grove Lane from 7 April 2013, following the removal of Cheshire East Council's subsidy for the service. It is now a wholly commercial venture operated by Stagecoach, save for the Monday-Sunday Grove Lane - Stockport evening service. The last journey Monday-Saturday will be 1925 from Bank Square.

From 13 January 2014 the 130 Sunday service becomes largely two hourly following the removal of subsidy by Cheshire East, after GHA Coaches decision to register the service as a commercial offering.

The A34 Manchester to Newcastle-under-Lyme and Winchester road now bypasses the town centre to the east. Manchester Airport lies just four miles (6 km) along the A538 to the north west, but Wilmslow lies away from the approach and departure routes and therefore suffers only slightly from aircraft noise.

The A34 bypass is the main road network that serves the town of Wilmslow. This was extended beyond neighbouring Alderley Edge in Winter 2010/11. The A34 Bypass joins the A555 at Handforth Dean and this road is currently being extended to Manchester Airport, due for completion in 2018.

Wilmslow and its close surroundings are served by several car showrooms of notable marque. These include Aston Martin, Porsche, Ferrari, Jaguar, Maserati, Land Rover, Bentley, McLaren, Rolls-Royce, Lamborghini and others.

All content from Kiddle encyclopedia articles (including the article images and facts) can be freely used under Attribution-ShareAlike license, unless stated otherwise. Cite this article:
Wilmslow Facts for Kids. Kiddle Encyclopedia.