The 2013 World Yo-Yo Contest was the culminating yo-yo competition of the worldwide competitive circuit. The winners from this competition in any of the six championship divisions were deemed the current World Yo-Yo Champion until the 2014 World Champions were crowned. The competition was run by Gregory Cohen injunction with the International Yo-Yo Federation (IYYF). The competition took place at the Rozen Plaza Hotel in Orlando, Florida, USA from August 8–10, 2013. 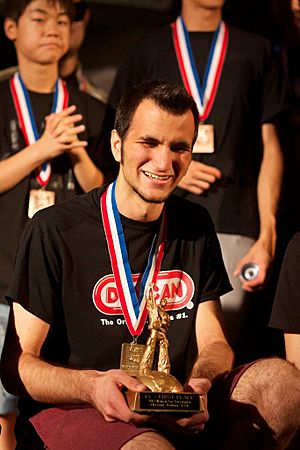 Hungary's Janos Karancz became the first European to win the 1A division at the World Yo-Yo Contest. 2013 was also the first, and only, year to feature a top-3 in 1A with no players from Japan or the United States. Coming into the competition, Janos had been undefeated sweeping the Hungarian National Title, and European Title; there was considerable expectation for him despite it being his first World Yo-Yo Contest. Notably, Hiroyuki Suzuki fell out of the top 5 for the first time since 2003.

Following Shu Takada's 2012 World Title in the 2A division, 2013 was set up as a rematch between Takuma Yamamoto and Shu Takada. This time, despite a very innovative routine from Shu Takada, Takuma Yamamoto's elite technical skill proved too much to overcome, and he secured his second World Title, his first in 2008. Japan, once again, swept the top three with Ryu Yamashita taking third.

Following an impressive win at the 2012 US National Yo-Yo Competition, Patrick Borgerding came into the 3A finals with considerable momentum. He challenged two-time defending champion Hank Freeman, but fell short. Hank Freeman completed a routine with only two minor mistakes—a record for the division—en route to securing his third consecutive World Title. Strong performances from Yasuki Tachibana, Alex Hattori, and Eric Tranton made the 2013 3A division perhaps the strongest it had ever been.

2013 was an extremely unusual year, with every player accumulating at least one major deduction. After defending champion Rei Iwakura racked up thirteen major deductions, the door was left open for up and coming star Michael Nakamura to take the World Title. Chun Hin Chan became the first player outside of the United States or Japan to finish top-3 in the 4A division.

Takeshi Matsuura came in first place, earning his fifth world title in the 5A division. In second place was 2007 5A World Champion Tyler Severance, and in third place was 2011 5A US National Chamption Samm Scott.

The judging system awarded Matsuura's tricks with a near-perfect score of 95.1, more than 20 points above the runner-up's score of 73.0.

There are a series of preliminary rounds before the final round at the World Yo-Yo Contest. In the past, anyone could enter the World Yo-Yo Contest. Competitors were allowed a one-minute routine, and a set number of players would make the finals. The preliminary rounds have been evolving over the years to accommodate the growing popularity of competitive yo-yos around the world.

In the 1A division, there was three rounds of competition. In 2A-5A, there was only the Preliminary (1 minute) and the Final (3 minute).

All content from Kiddle encyclopedia articles (including the article images and facts) can be freely used under Attribution-ShareAlike license, unless stated otherwise. Cite this article:
2013 World Yo-Yo Contest Facts for Kids. Kiddle Encyclopedia.