Alexandria is a town in Grafton County, New Hampshire, United States. The population was 1,776 at the 2020 census, up from 1,613 at the 2010 census. Newfound Lake is in the northeast corner, with Wellington State Park on the western shore. The town is home to Welton Falls State Forest. Cardigan Mountain State Park, with Mount Cardigan, is in the west. Another attraction is Mowglis Mountain, named for Rudyard Kipling's Jungle Book hero.

Granted in 1753 by the Masonian Proprietors, the town was named for Alexandria, Virginia, location of a 1755 conference of governors early in the French and Indian War. Alexandria was granted to Joseph Butterfield and others, 13 March 1757. First settled in 1769 by John Moore Corliss and his brother Jonathan, it was incorporated by the General Court on 23 November 1782. Danbury was set off and incorporated in 1795.

Although farmers found parts of the terrain mountainous, other parts were level intervale suited for cultivation. By 1859, when the population was 1,273, agriculture was a chief occupation. The town also had a carriage maker, nine sawmills and three gristmills.

Alexandria was the birthplace of Luther C. Ladd (1843–1861), the first enlisted soldier to lose his life in the Civil War, shot during the Baltimore Riot. Today, the town is home to Cardigan Lodge, the Appalachian Mountain Club facility at the base of Mount Cardigan. 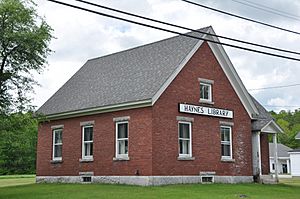 There were 504 households, out of which 31.5% had children under the age of 18 living with them, 64.7% were married couples living together, 7.5% had a female householder with no husband present, and 23.4% were non-families. 16.9% of all households were made up of individuals, and 6.0% had someone living alone who was 65 years of age or older. The average household size was 2.64 and the average family size was 2.94.

All content from Kiddle encyclopedia articles (including the article images and facts) can be freely used under Attribution-ShareAlike license, unless stated otherwise. Cite this article:
Alexandria, New Hampshire Facts for Kids. Kiddle Encyclopedia.