The Alexandria Zoological Park is a 33-acre (13 ha) zoo located in Alexandria, Louisiana, United States. First opened to the public in 1926, it is owned by the City of Alexandria and operated by the Division of Public Works. It is home to about 500 animals.

The zoo was started in 1926 in Bringhurst Park as a row of cages. When the United States Department of Agriculture (USDA) threatened to close the zoo in the 1960s, the city created the committee that is now Friends of the Alexandria Zoo (FOTAZ), the support organization for the zoo.

The zoo is accredited by the Association of Zoos and Aquariums (AZA) and takes part in about 20 Species Survival Plans (SSP).

The Alexandria Zoological Park was established in 1926 in Bringhurst Park. Photos from the early 1930s show cages constructed of chain link fence and iron bars, with very little vegetation planted near the exhibits. The only exhibits to survive from this era are the original fish pools, which are now used for wild fowl habitat. Additional cages, including a sea lion pool, were added in the 1940s.

Although public comment indicates that the zoo once housed a chimpanzee and buffalo, the zoo was mostly started with discarded pets such as rabbits, goats, and deer. There is very little documentation for these early years, but the zoo seems to have changed very little until the late 1960s or early 1970s when the United States Department of Agriculture threatened to close it. This prompted City Commissioner O’Hearn Mathews to appoint the first zoo committee, which evolved into the Friends of the Alexandria Zoo (FOTAZ), the current support organization for the zoo.

Much of the credit for the current quality of the zoo has been given to Robert Leslie Whitt (1951–2008), who served as director for thirty-four years prior to his death. Whitt was hired in 1974 by then Streets and Parks Commissioner Malcolm P. Hebert.

Exhibits and other facilities 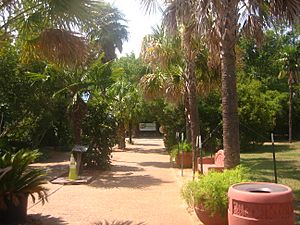 In addition to its regular exhibits, the zoo has four themed habitat areas.

The zoo opened a small part of the African Experience in September 2003. The large naturalistic habitat for African lions includes large rock formations and a waterfall. This initial part of the exhibit also includes dwarf crocodiles and crested porcupines. Two new exhibits in this area were opened in April, 2004. One is home to the zoo's Aldabra and Galapagos tortoises, and the other is a "Venom Center" or African snake house.

Louisiana Habitat was opened in 1998, and features the plants, animals, architecture, industry and culture of Louisiana. Native species such as alligator, roseate spoonbill, North American river otter, cougar, black bear, bobcat, raccoon, red wolf, white-tailed deer and many others live in naturalistic exhibits depicting the marshes, swamps, and uplands of the state. Turtles, fish, otters, and alligators can be seen from an underwater viewing area. This exhibit received a "best public facility" award in 1998 from the Louisiana Contractors magazine, and a "Significant Achievement" award in 2002 from the AZA.

Bayou Le Zoo Choo Choo, the zoo's 2 ft (610 mm) narrow gauge miniature train, runs all year but only operates on weekends in January and February. It also runs during the zoo's Holiday Light Safari. The train depot is just to the left of the main entry area, and the train takes visitors all the way around the outside edge of the zoo.

Annual events at the zoo include Zoo Boo at Halloween and Holiday Light Safari.

African Experience was not complete as of 2009. It will be expanded to house many other animals including zebras, giraffes, pygmy hippos, hoofed mammals, birds, leopards, servals, colobus monkeys and other primates, meerkats, and Nile crocodiles.

All content from Kiddle encyclopedia articles (including the article images and facts) can be freely used under Attribution-ShareAlike license, unless stated otherwise. Cite this article:
Alexandria Zoological Park Facts for Kids. Kiddle Encyclopedia.