Ambler is a borough in Montgomery County, Pennsylvania, in the United States. It is located approximately 16 miles (26 km) north of the city center of Philadelphia, Pennsylvania.

The historical territory of the Lenni Lenape was in the Delaware River Valley, in an area reaching from Cape Henlopen, Delaware, northward towards the lower Hudson Valley in southern New York. The area towards the south, including what is now Philadelphia and nearby Ambler, was the home of a linguistic group called the Unami. According to tradition, the Lenape established a peace treaty in with Quaker William Penn in the 1680s. 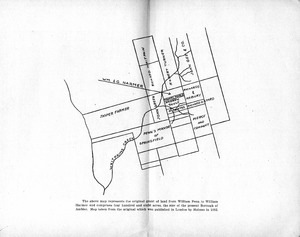 The original grant of land from William Penn to William Harmer

William and George Harmer are listed among the Quakers who emigrated to Pennsylvania in 1682. In 1716, William and George Harmer purchased a 408-acre tract from William Penn, an area including most of what now is Ambler Borough. They are credited as the first landholders to actually settle in the area. William Harmer built a grist mill powered by the Wissahickon Creek, "the first commercial venture in the Ambler area". He also built a stone dwelling with casement windows and diamond shaped leaded glass, near what is now the intersection of Butler Pike and Morris Road. After his death in 1731, the house, mill, and property were sold to Morris Morris and his wife Susanna Heath Morris.

The Village of Wissahickon

Residents sought permission from the Crown to build roads in the area. The first road built in Ambler, now known as Mt. Pleasant Avenue, was confirmed in 1730. It went from Harmer's Mill to the North Wales Road (now Bethlehem Pike). Butler Pike was created in 1739, and went through the town, which was known at that time as the Village of Wissahickon, after the Wissahickon Creek.

The area at the crossroads of Butler and Bethlehem Pike was roughly the village center. It was first known as Gilkey's Corner, named for an inn which was built around 1778 and managed by Andrew Gilkinson (or Gilkeson). After 1878, the area was known as "Rose Valley".

As of 1790, Jonathan Thomas purchased half an acre of land from Gilkinson and sited a tannery at the intersection, causing a nearby creek to be nicknamed "Tannery Run". As of 1810, the tannery was sold by his son, David Thomas, to Joseph Rutter. As the "Rose Valley Tannery", it is mentioned as being one of the oldest in the county. It later became the property of Alvin Faust and the firm A. D. Faust Sons.

Increasingly from 1750 to 1850, industries developed throughout the watershed, using local waterways to provide power and carry away waste. The area supported nine mills, producing flour, timber, paper and cloth. They are identified by Dr. Mary Hough as Plumly Mill (first owned by William Harmer), Fulling Mill (owned by Andrew and Mary Ambler), Thomson's Mill, Reiff Mill, Wertsner Mill, Hague Mill, Burk Mill, a Silk Mill, and a Clover and Chopping and Saw Mill. However, as steam power replaced water power in the 1870s and 1880s, the mills were unable to compete, and were abandoned. 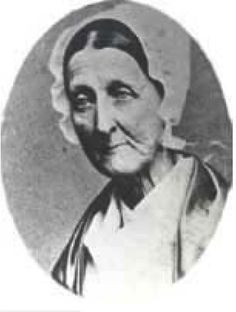 In 1855, Wissahickon Station became a stop on the North Pennsylvania Railroad line. On July 17, 1856, the town was the site of a disastrous train accident: The Great Train Wreck of 1856. The northbound Shackamaxon, a picnic excursion train, and the southbound Aramingo collided head on, killing 59 people instantly, with another 86 injured. Mary Johnson Ambler, a local Quaker woman, walked two miles to the crash site, bringing medical supplies and directing rescue efforts. She turned her house at Tennis Avenue and Main Street into an impromptu hospital for nursing the survivors. Thirteen years later, in 1869, the railway company renamed the station Ambler in her honor. The post office followed suit, and when the borough was formally incorporated on June 16, 1888, it too took the name of Ambler, in honor of Mary Johnson Ambler.

In 1881, the Keasbey and Mattison Company, whose business included the manufacture of asbestos, moved to Ambler from Philadelphia. Ambler's location along the railroad line was a primary consideration in the location of Keasbey and Mattison Company in Ambler, as it meant that raw asbestos could be easily brought in from Quebec and finished products sent out to markets. Another consideration was the availability of magnesium carbonate, from local dolomite mines. The original K&M factory was built as of 1883.

When the company arrived, the town consisted of "70 houses, 250 residents, a drug store, general store and a few other businesses." Keasbey and Mattison invested heavily in the town, bringing in Southern Italian stoneworkers to build 400 houses for workers and managers, as well as offices, an opera house, the Trinity Memorial Episcopal Church, and Mattison's personal estate, Lindenwold Castle. Many of the Italians stayed in Ambler, helping to form its cultural identity. Maida, Calabria is the town's sister city today. The company also employed African Americans, originally from West Virginia, in the less-desirable wet-processing areas of the asbestos plant. They tended to settle in west and south Ambler.

By World War I, Ambler was known as the "asbestos capital of the world". However, the Great Depression took its toll, and the company was sold to an English concern, Turner & Newall (T&N), in 1934. The plant continued to operate under the K&M name.

In England in 1924, doctors reported the first case of asbestosis, a chronic illness caused by the inhalation of asbestos fibers. By the 1950s, evidence linking asbestos to cancer was mounting. Richard Doll, an epidemiologist at Turner and Newall, reported (in spite of company pressure) that people exposed to asbestos for 20 or more years had a 10 times higher risk of developing lung cancer than the general population. Also, a formerly rare and almost always fatal cancer, mesothelioma, was reported in epidemic proportions near asbestos mines in South Africa. In the 1960s, the British Journal of Industrial Medicine indicated that simply living near an asbestos factory, or in an asbestos-insulated building, increased mesothelioma risk.

Turner & Newall operated the factory until it closed in 1962, then sold the property to CertainTeed Corporation and Nicolet Industries. By 1973, the Environmental Protection Agency (EPA), began to restrict the use of asbestos, stopping the sale of insulation spray in 1973, and of solid asbestos insulation in 1975. In 1974, Nicolet held a competition, offering a $20,000 prize for the proposal of a "feasible commercial application" for its waste chalk piles. Nicolet filed for bankruptcy in 1987. By 1989, most remaining products were banned, under the 1989 Asbestos Ban and Phaseout Rule. Although the Ban was struck down in 1991, few asbestos-based products remain in the domestic marketplace.

Federal-Mogul, an American automotive supplier, purchased the remaining assets of Turner & Newall in 1998. As health concerns about asbestos became widely known, it too found itself in Chapter 11 bankruptcy due to asbestos liability.

A 2011 study by the Pennsylvania Department of Health reviewed data from 1992 to 2008, and reported that mesothelioma was diagnosed 3.1 times more often in Ambler residents than in other Pennsylvania residents. The higher rates were attributed to previous asbestos exposure in the factories.

In Ambler, where more than 1.5 million cubic yards of asbestos waste were discarded in a 25-acre area known as the "White Mountains", contamination remains an issue. From 1973 to 1993 the United States EPA oversaw remediation of the White Mountains, renamed the "Ambler Asbestos Piles". It was proposed to the National Priorities List (NPL) as a Superfund site on October 10, 1984 and formally added to the list as of June 10, 1986. Various remedies were completed as of August 30, 1993 and the site was consequently deleted from the National Priorities List on December 27, 1996, after remediation. The site is reviewed every five years by the EPA.

Local government has made redevelopment of the sites a priority. A 2005 proposal for a 17-story condominium tower was withdrawn after community opposition to the project. One of the concerns was asbestos waste at the location. In 2009 the Environmental Protection Agency (EPA) designated the proposed development as part of a second Superfund site, the BoRit Asbestos Site. The site includes an asbestos waste pile, an 11-acre pond and a former park. The EPA estimated that it would complete the initial cleanup phase at the BoRit site as of 2015.

In 2013, Heckendorn Shiles Architects and Summit Realty Advisers successfully converted the derelict factory and smokestack of the Keasbey & Mattison company into a LEED Platinum Certified multi-tenant office building, the Ambler Boiler House. The adaptive reuse project won support from the EPA’s Brownfields Program and the EnergyWorks program. The renovations cost $16 million, and have resulted in a building with substantial green features including a grey-water system, geothermal energy, solar panels and a reflective roof system, and high-efficiency glass.

Dawesfield was added to the National Register of Historic Places in 1991. During the American Revolutionary War, "Dawesfield" was the property of James Morris, and was used by General George Washington as a headquarters from October 21 to November 20, 1777. James Morris also owned one of the mills in the Ambler area.

The Keasbey-Mattison houses are of interest in part because of the class differences revealed in the construction of different types of houses for workers, supervisors, and administrators, (not to mention Lindenwold Castle, home of Mattison himself.)

Other buildings of interest, some of which no longer exist, include:

Act II Playhouse is a 130-seat professional theatre founded in 1998. Act II has been nominated for 31 Barrymore Awards and has won six.

Originally opened in 1927 as a Warner Brothers movie theater, the recently restored and renovated Ambler Theater is a non-profit, community owned movie theater that shows independent, art and limited-distribution films.

The Family, Industry and Agriculture, 1939, WPA mural by Harry Sternberg, in the old post office

Post office murals were produced from 1934 to 1943 in the United States through the Section of Painting and Sculpture, later called the Section of Fine Arts, of the Treasury Department. The murals were intended to boost the morale of the American people from the effects of the Depression by depicting uplifting subjects. The murals were funded as a part of the cost of the construction or renovation with 1% of the cost set aside for artistic enhancements. In 1939, artist Harry Sternberg completed the mural, The Family, Industry and Architecture for the towns post office. The artist and his family are the main figures in the painting.

Ambler train station with restaurant Trax behind it

Butler Avenue serves as the main street through Ambler, with the road known as Butler Pike outside the borough. Butler Pike heads southwest to Plymouth Meeting and northeast to Horsham Township. Bethlehem Pike runs along the eastern border of Ambler and heads north to Montgomeryville and south to Philadelphia. Pennsylvania Route 309 passes to the east of Ambler on a freeway called the Fort Washington Expressway, with access to Ambler at a southbound exit and northbound entrance at Butler Pike and a northbound exit and southbound entrance at Susquehanna Road. The Pennsylvania Turnpike (Interstate 276) has an interchange with PA 309 south of Ambler in Fort Washington.

Ambler is served by SEPTA Regional Rail's Lansdale/Doylestown Line, which provides service to Center City Philadelphia, Lansdale, Doylestown and other intermediate points, at the Ambler station, which is a major park-and-ride facility on the line. SEPTA Suburban Division bus routes 94 and 95 also serve Ambler, with Route 94 connecting Ambler to the Chestnut Hill section of Philadelphia and the Montgomery Mall and Route 95 connecting Ambler to Willow Grove and Gulph Mills.

Ambler is a sister city with:

All content from Kiddle encyclopedia articles (including the article images and facts) can be freely used under Attribution-ShareAlike license, unless stated otherwise. Cite this article:
Ambler, Pennsylvania Facts for Kids. Kiddle Encyclopedia.