Amsterdam is a city in Montgomery County, New York, United States. As of the 2010 census, the city had a population of 18,620. The name is derived from the city of Amsterdam in the Netherlands.

The city of Amsterdam is surrounded on the north, east, and west sides by the town of Amsterdam. The city developed on both sides of the Mohawk River, with the majority located on the north bank. The Port Jackson area on the south side is also part of the city. 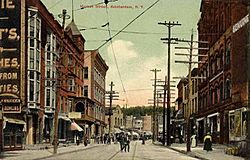 The city is within the original, now defunct town of Caughnawaga.

The first Europeans to settle here were Dutch immigrants about 1710. They called the community Veeders Mills and Veedersburgh after Albert Veeder, an early mill owner. After the American Revolutionary War, many settlers came from New England. Anglo-American residents changed the name to Amsterdam in 1803. In 1773, Guy Johnson built Guy Park, a stone Georgian mansion. A Loyalist, he fled to Canada during the Revolution. The mansion has been preserved and listed on the National Register of Historic Places.

It was incorporated as a village on April 20, 1830 from a section of the Town of Amsterdam. New charters in 1854, 1865, and 1875 increased the size of the village. In 1885, Amsterdam became a city, which subsequently increased in size by annexation of the former village of Port Jackson on the south side of the Mohawk River; it became the fifth ward of the city.

The completion of the Erie Canal in 1825 was an economic boom to the city, which became an important manufacturing center. It was known for its carpets. In 1865, the population of Amsterdam was 5,135. By 1920, it was 33,524. Through the late 19th and early 20th centuries, it was a destination for immigrants from southern and eastern Europe, who initially worked in the factories.

Amsterdam experienced serious flooding damage in the aftermath of Hurricane Irene in late August 2011. This flooding threatened properties at the river's edge due to erosion and water damage.

The city developed on both sides of the Mohawk River and Erie Canal. The Chuctanunda River flows into the Mohawk from the north at Amsterdam. 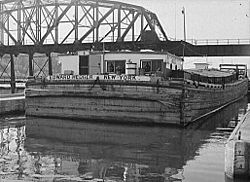 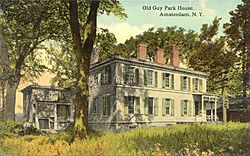 Amsterdam's former National Guard Armory, which is listed on the National Register of Historic Places, has been adapted for use as a bed and breakfast inn called Amsterdam Castle.

The city is home to the Amsterdam Mohawks baseball team of the Perfect Game Collegiate Baseball League. The team plays at Shuttleworth Park.

The Professional Wrestling Hall of Fame was located in Amsterdam until November 2015, when it relocated to Wichita Falls, Texas.

The Mohawk Valley Gateway Overlook pedestrian bridge spans the Mohawk River and connects the city's Bridge Street downtown area on the south shore and Riverlink Park on the north shore. 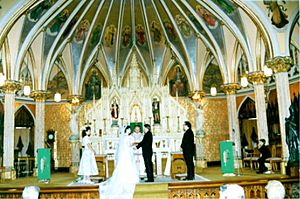 All content from Kiddle encyclopedia articles (including the article images and facts) can be freely used under Attribution-ShareAlike license, unless stated otherwise. Cite this article:
Amsterdam (city), New York Facts for Kids. Kiddle Encyclopedia.