Atwell is a suburb within the metropolitan area of Perth, Western Australia, situated 21 kilometres (13 mi) south of Perth City, and located in the City of Cockburn local government area.

Situated on the Swan coastal plain, between the coast, and the Darling scarp, the terrain is generally flat, with many small natural and created wetlands. It is situated on the western boundary of the Jandakot ground water protection area, and hence suburban development to the east is not permitted. It is bounded to the north by Armadale Road, the Kwinana Freeway to the west, Tapper Road to the east and to the south by Gibbs Road. 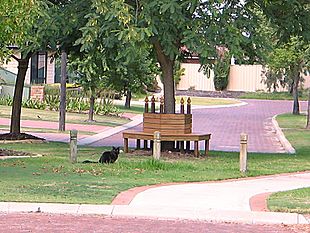 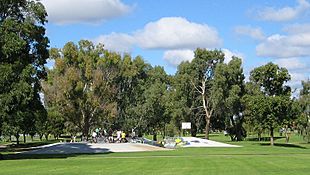 The Whadjuk Nyungar aboriginal people were the first human inhabitants of the region. Occupying the region from 40,000 years ago. The many lakes and wetlands of the region were important for sustenance and spiritually.

After European settlement of the Perth region in 1829, the land of much of the area including and surrounding what is now Atwell was granted to G Dunnage. The area was later part of the dairy property owned and operated for many years by Ernest Atwell. Originally it was purchased in the 1920s to spell horses he used in his livery stable business, which was conducted in Fremantle. It was later developed into one of the largest dairies in the Perth region. The huge amount of land was slowly sold off but the Dairy was still operating until the late 1950s. The house and workers cottage were eventually demolished when the area was cleared for redevelopment.

Development of the suburb of Atwell began in the early 1990s through the creation of several housing estates such as Beeliar parklands and has continued to expand with the estates, Atwell Waters, and Harvest Lakes being developed. Most of the available land in the suburb has now been developed for residential, parks and reserves, roads and some retail.

There are two community centres in Atwell. The Atwell Community Centre on Reynardson Ave, and the Harvest Lakes Community Centre, situated in the grounds of Harmony Primary School. 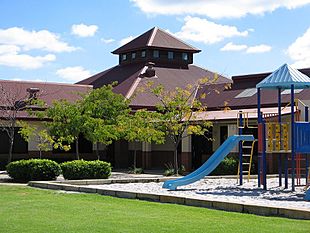 There are three retail precincts in Atwell. A small centre in the north on Lydon Blvd was opened in the late 1990s, consisting of a delicatessen and a Chinese restaurant. A second larger centre was opened on Reynardson Ave in central Atwell in the early 2000s consisting of a supermarket and several other food and service stores. A third shopping centre was completed in June 2014 in Harvest Lakes that consists of a Woolworths supermarket, a Cafe', Chinese and Italian restaurant and a few other shops. 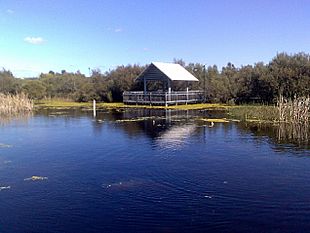 Atwell Oval is the main sporting ground with two sports fields for Football in Winter and Cricket in Summer. It has a clubhouse and change rooms for the Jandakot Jets Junior Football Club which plays Australian rules football, as well as Jandakot Lakes Junior Cricket Club which plays cricket. In addition, Softball and Tee ball are also played here. Atwell and Harmony Primary school ovals are open to the public and have cricket pitches and nets. 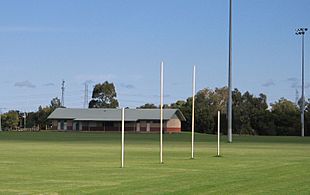 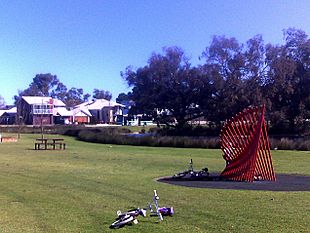 Regular bus services on route 527, operates North to Cockburn Central railway station, located just outside the North Western boundary of Atwell, and Gateways regional shopping centre in Success, and South to Aubin Grove and Honeywood estate in Wandi. Train services connect to Perth and Mandurah. The new Aubin Grove train station which actually straddles Atwell and Success is due to open in April 2017.

Atwell is well connected with transport infrastructure, being situated adjacent to a transport hub at Perth's southern approaches. Access to Perth in the North and Rockingham / Mandurah in the South is via the Kwinana Freeway which is accessible via interchanges at Armadale Road and Gibbs Road. East Access to Armadale is via Armadale Road. Western access to Fremantle is via Beeliar Drive and North Lake Road.

Footpaths and dual use cycle paths are present on all of the major roads within Atwell. A dual use path on Armadale Road leads to the Kwinana Freeway dual use path, which connects to the more than 750 km cycle routes in the Perth Region.

For other places with the same name, see Atwell (disambiguation).

All content from Kiddle encyclopedia articles (including the article images and facts) can be freely used under Attribution-ShareAlike license, unless stated otherwise. Cite this article:
Atwell, Western Australia Facts for Kids. Kiddle Encyclopedia.