City of Cockburn facts for kids

The City of Cockburn is a local government area in the southern suburbs of the Western Australian capital city of Perth about 8 kilometres (5 mi) south of Fremantle and about 24 kilometres (15 mi) south of Perth's central business district. The City covers an area of 167.5 square kilometres (64.7 sq mi) and had a population of over 104,000 as at the 2016 Census.

Cockburn is named after Cockburn Sound, which was named in 1827 by Captain James Stirling after Admiral Sir George Cockburn. Sir George was born in London in 1772 and was a renowned British naval officer, eventually becoming Admiral of the Fleet and First Sea Lord. He served under Horatio Nelson during the war with France, but came to public attention and was granted his knighthood for his service in the War of 1812, in particular for the burning of Washington in 1814. It was he who took Napoleon to exile on the island of Saint Helena after the Battle of Waterloo in 1815.

In 1871, the Fremantle Road District was created under the District Roads Act 1871 to cover the area to the south and east of Fremantle, and the Fremantle Road Board was created to manage it. The original District was bounded on the north by the Swan River from Fremantle to the mouth of the Canning River; on the east by a line from Bull Creek to the junction of what is now the intersection of the Albany and South Western Highways in Armadale; on the south by a line from Armadale to, and including the Rockingham townsite; and to the west by the Indian Ocean.

In the first five years of the Board's existence most of its members served on the Fremantle Town Council. The function of the Board was simply to provide the roads that linked Fremantle to other parts of the Colony. By 1913 the District was divided into Wards, each electing representatives to the Board. In 1922 the Board constructed new offices at the corner of Forrest and Rockingham Roads.

In July 1923, the District received a large amount of land (gaining the localities of Atwell and Banjup and 75% of the Jandakot locality) from Jandakot Road District when that entity was abolished. On 21 January 1955, it was renamed Cockburn, after a successful referendum underlined the desire for recognition of the District's independence from Fremantle.

On 1 July 1961, Cockburn Road District became a shire following the enactment of the Local Government Act 1960, and on 24 January 1971, almost exactly 100 years after the formation of the Fremantle Road District, it became a Town in recognition of its increasingly urban nature. On 26 October 1979 the town attained City status.

The city is divided into three wards, each electing three councillors. The mayor is directly elected. 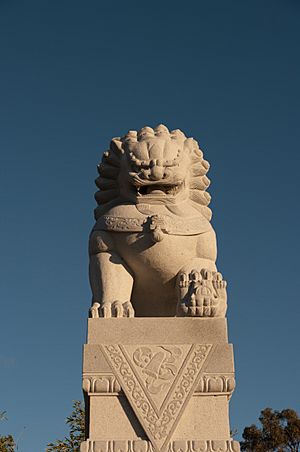 All content from Kiddle encyclopedia articles (including the article images and facts) can be freely used under Attribution-ShareAlike license, unless stated otherwise. Cite this article:
City of Cockburn Facts for Kids. Kiddle Encyclopedia.