Back to the Future (TV series) facts for kids

Back to the Future (also known as Back to the Future: The Animated Series) is an animated science-fiction comedy adventure television series for television based on the live-action Back to the Future film trilogy. The show lasted two seasons, each featuring 13 episodes, and ran on CBS from September 14, 1991 to December 26, 1992 with reruns until August 14, 1993. The network chose not to renew the show for a third season (citing low ratings). It was later rerun on Fox, as a part of the FoxBox block, from March 22 to August 30, 2003.

Although the series takes place after the films, creator Bob Gale has stated that the animated series and the comic books take place in their own 'what if' and alternate timelines. This show marked the debut television appearance of Bill Nye on a nationally broadcast show.

Following the conclusion of Back to the Future Part III, in 1991, Dr. Emmett Brown moved into a farm in Hill Valley with his wife Clara, their sons Jules and Verne, and the family dog, Einstein. As with the films, time travel was achieved through the use of a modified DeLorean, which had apparently been re-built after it was destroyed at the end of the trilogy. The DeLorean now has voice-activated "time circuits" and can also travel instantaneously to different locations in space and time, in addition to folding into a suitcase. The characters also travel through time using the steam engine time machine Doc invented at the end of the third film.

Although Marty McFly is the show's main character and Jennifer Parker makes occasional appearances, the show focused primarily on the Brown family, whereas the films focused on the McFly family. The film's villain, Biff Tannen, also appeared frequently. In addition, relatives of McFly, Brown, and Tannen families were plentiful in the past or future parallel time zones visited. Unlike the films, which took place entirely in Hill Valley and the surrounding area, the series frequently took the characters to exotic locations. At the end of every episode, Doc Brown would appear to do an experiment, often related to the episode's plot. The first season also included post-credits segments with Biff Tannen telling a joke related to the episode, alluding to Thomas F. Wilson's career as a stand-up comedian. 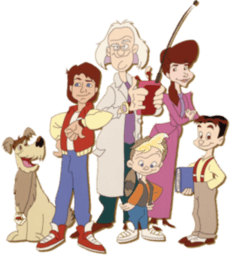 Mary Steenburgen (Clara Clayton Brown) and Thomas F. Wilson (Biff Tannen) voiced their characters from the films. Christopher Lloyd played Doc Brown in the live-action segments which opened and closed each episode while Dan Castellaneta provided the animated Doc Brown's voice. James Tolkan, who previously portrayed Principal Strickland from the films, voiced an unnamed Civil Defense Warden in the episode: "Marty Mcfly PFC". In addition, Bill Nye appeared as Dr. Brown's Lab Assistant during the live-action segments at the end of each episode performing scientific experiments related to the episode. Nye also serves as the show's technical advisor. These segments later led to Nye getting his own show.

Although the show no longer airs on television, nine VHS cassettes and three laserdisc volumes of the series were released from 1993 to 1994, chronicling 18 of the 26 episodes. The entire complete show was released on DVD on October 20, 2015 for the first time, both individually and as part of the Back to the Future: The Complete Adventures collection (which also includes all three films of the trilogy). In addition, the first episode from each season of the animated series (Brothers and Mac the Black) are included as bonus materials in the Back to the Future: 30th Anniversary Trilogy set.

A comic book series was published by Harvey Comics detailing further adventures of the animated show. Two mini-series were published, the first being a four-issue run, the second, a three-issue run subtitled "Forward to the Future" and a "Special" issue was also released, reprinting parts of the first mini-series' first issue. The comics were written by Dwayne McDuffie with art by Nelson Dewey.

In August 2020, as part of the 35th anniversary of the release of Back to the Future, three 6" scale action figures were produced by NECA based on Back to the Future: The Animated Series. Marty McFly, 'Doc' Brown and Einstein, and Biff Tannen were released as part of the "Toony Classics" line and sold both online and at retail at a $12.99 price point. Marty McFly came packed with a hoverboard and guitar with strap. Doc Brown included Einstein with his digital stopwatch collar, a remote control, a set of extra hands, and googles. The Biff Tannen figure included an alternate interchangeable head.

All content from Kiddle encyclopedia articles (including the article images and facts) can be freely used under Attribution-ShareAlike license, unless stated otherwise. Cite this article:
Back to the Future (TV series) Facts for Kids. Kiddle Encyclopedia.