Cherkasy (Ukrainian: Черкаси, transliterated: Čerkasy) is a city in central Ukraine. It is the capital of the Cherkasy Oblast (province), as well as the administrative center of the surrounding Cherkasky Raion (district) within the oblast. 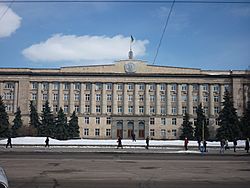 Central square of the city, in front of Oblast (province) Administration

The city is on the right bank of Dnieper River (specifically at the Kremenchuk Reservoir), about 200 km (124 mi) south of the nation's capital, Kiev. The city is divided into 2 parts (raions) - Sosnivskiy (with Orshanets village) and Pridniprovskiy. The current population of Cherkasy is 285,526 (as of 2010).

All content from Kiddle encyclopedia articles (including the article images and facts) can be freely used under Attribution-ShareAlike license, unless stated otherwise. Cite this article:
Cherkasy Facts for Kids. Kiddle Encyclopedia.