The Chinatown neighborhood in Oakland, California（Chinese: 屋崙華埠）, is a pan-Asian neighborhood which reflects Oakland's diverse Asian American community. It is frequently referred to as "Oakland Chinatown" in order to distinguish it from nearby San Francisco's Chinatown. It lies at an elevation of 39 feet (12 m).

Chinese were the first Asians to arrive in Oakland in the 1850s, followed by Japanese in the 1890s, Koreans in the 1900s, and Filipinos in the 1930s and 1940s. Southeast Asians began arriving in the 1970s during the Vietnam War. Many Asian languages and dialects can be heard in Chinatown due to its diverse population.

Chinatown is located in downtown Oakland, with its center at 8th Street and Webster Street. Its northern edge is 12th Street, and its southern edge is Interstate 880 (located approximately at 6th Street). It stretches from Broadway on the west to the southern tip of Lake Merritt in the east.

Oakland's Chinatown, is experiencing a prolonged recession primarily due to a citywide 30% minimum wage increase, forcing many small businesses that traditionally survived on low margin-high volume goods to shut down because of labor costs.

Oakland Chinatown dates back to the arrival of Chinese immigrants in the 1850s, making it one of the oldest Chinatowns in North America. By 1860, the census of Oakland included 96 "Asiatics" among a total of 1,543 (6.2% of the city's population). More Chinese arrived to help build the Central Pacific Railroad western portion of the First Transcontinental Railroad during the Coolie slave trade during the 1860s.

The Chinese settled in shrimp camps on the estuary of Oakland at 1st Street and Castro in the 1850s, near the Point in West Oakland which was referred to as "Chinese Point", and at 4th and Clay streets. The Chinese settlement at Telegraph between 16th and 17th streets burnt down in 1867 and was relocated at the San Pablo Avenue Chinatown between 19th and 20th streets; it is now known as Oakland's Old Uptown Chinatown. Other areas settled were 14th Street between Washington and Clay, and the Charter line (22nd Street) between Castro and Brush Streets.

Fears of the Yellow Peril and local exclusion laws forced the Chinese population to resettle to its current location centered at 8th Street and Webster Street in the 1870s.

The first Chinese in Oakland fished in the San Francisco Bay for shrimp similarly to the Chinese at China Camp near San Rafael. In 1868, Chinese laborers built the Temescal Dam in Oakland providing water for the East Bay as well as the Lake Chabot Dam in 1874-75. They worked in canneries, cotton mills and fuse and explosive factories as well as farms. In the 1880s, discriminatory laws made it difficult for Chinese immigrants to own land or even find work. They found work as laundry workers, cooks, gardeners, houseboys, or as vegetable peddlers. The Chinese Exclusion Act severely limited the further immigration of Chinese. By 1900, the Chinese in Oakland numbered less than 1,000.

The 1906 San Francisco earthquake and fire destroyed most of San Francisco's Chinatown and more than 4,000 Chinese survivors found refuge in Oakland. Even while San Francisco Chinatown was rebuilding, many stayed in Oakland, bringing the Chinatown population to about 2,500. Because of immigration restrictions barring Chinese women and children, a bachelor society was created.

In the 1920s, Oakland Chinatown grew from 10th Street to the waterfront from Broadway to Harrison.

Even until 1940, the Chinatown population grew only to about 3,000. With the United States involvement in World War II and the fact that China was an ally, the Chinese Exclusion Act was repealed in 1943, however the immigration quota was maintained at 105 immigrants per year.

In 1950, Chinatown grew to a population of 5,500, but local housing was lost due to the construction of Interstate 880, which runs through 8 blocks between 5th and 6th streets and serves as a transportation artery for some of Chinatown's commercial activity, Laney College (8 blocks) and later in the late 1960s, the Bay Area Rapid Transit headquarters and Lake Merritt station (2 blocks) and Oakland Museum of California (4 blocks).

Oakland Chinatown was economically stagnant for many years, especially after multigenerational Chinatown residents began moving to the suburbs in the late 1960s. However, Chinatown saw much steady development during the 1980s and 1990s as Chinese American merchants relocated from San Francisco to Oakland, and due to increased immigration from mainland China, Hong Kong, Vietnam, Cambodia, and Thailand. During this time period, many ethnic Chinese Vietnamese and Chinese Cambodians began opening new small businesses, essentially replacing many of the older Taishanese-dominated businesses. Also, investors with Hong Kong backgrounds constructed the Pacific Renaissance Plaza in the early 1990s. Chinatown still retains the traditional aspects and characteristics of an older Chinatown. Oakland's Chinatown also includes a historic and still thriving fortune cookie factory.

Although it is overshadowed by its more prominent, tourist-oriented counterpart in San Francisco, Oakland's Chinatown is bustling with activity and considered to be more authentic to many. Other Asian cultures are represented in Oakland's Chinatown as it has also been settled by non-Chinese Asians such as ethnic Vietnamese (many of whom operate many of Chinatown's jewelry businesses), Koreans, and Thais making it more of a pan-Asian area as opposed to a "Chinatown." As is the case with other retail and commercial districts around Oakland, the many customers and thriving businesses in Chinatown generate sales tax revenue for Oakland city and Redevelopment Agency coffers.

Japanese immigrants began settling in Oakland in the 1890s mostly in West Oakland around Market Street. Later, hundreds were living in the section between Harrison and Oak streets south of 8th Street. They owned several stores in Chinatown. After the attack on Pearl Harbor in 1941, all Japanese Americans were sent to internment camps. The Masuda family had posted a large "I Am An American" sign outside their Oakland grocery store, Wanto Company, at 8th and Franklin streets which was photographed by Dorothea Lange. Many did not return to Oakland after the war ended. The Buddhist Church of Oakland is one of the few institutions remaining of Oakland's Japantown.

Filipinos immigrated to the area in the early 1900s. Oakland Chinatown was the center of commerce and community gathering for Filipinos in the East Bay during 1940 - 1960. 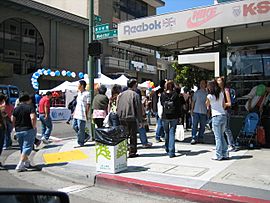 A crowded sidewalk during the 2006 Chinatown StreetFest.

The Chinese Community United Methodist Church (CCUMC), which was initially the Chinese Methodist Church was founded in 1887 . The church was established as part of a chain of Methodist Chinese Missions by the Rev. Dr. Otis Gibson. This church has close connections with the Women's Missionary Society of the Pacific Coast in San Francisco. In the early days, the Chinese Methodist Church held worship service and Sunday School. Then to serve the needs of the growing Chinese community, an English school for immigrants, and a Chinese school for the American-born Chinese also operated. The early days of the church was sustained by courageous workers, both Chinese- and American-born as there were strong anti-Chinese sentiments in California at this time.

The church was located at several sites in Oakland Chinatown. Chan Hon Fun was the pastor from 1900 to 1909 and established the church's current location in 1905 at 321 8th Street Oakland, CA 94607. In 1913, a fire devastated the building and a new building was erected. But by the 1940s, the church outgrew even this building. Under the leadership of Rev Edwar Lee, a new church and the current main sanctuary was built in 1952. With more growth, more space was needed, and a new social hall and classrooms annex was built in 1970.

Chinese opera was one of the first traditional Chinese art forms in Oakland. In 1907, a Chinese Theater at 9th and Franklin streets opened which could seat 500 people and had a company of 30 full-time actors from China. Today, three styles of Chinese opera clubs are active in Oakland: Cantonese opera, Beijing opera, and Kunqu. 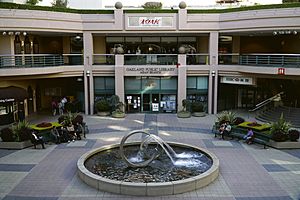 A plaza built by Hong Kong investors in the 1990s, this plaza is often viewed as the center of Oakland Chinatown, it consists of many restaurants, a library, jewelry store, bank, ice creamery, and other health services.

The Asian Branch Library is one of many of Oakland Public Library's branches and is located in Chinatown's "Pacific Renaissance Plaza." The Asian Library is unique among public library branches in the United States as it houses eight Asian languages (Chinese, Japanese, Korean, Vietnamese, Thai, Cambodian, Tagalog and Laotian) in major reference titles and general subject titles, an Asian Studies collection, in addition to an English-language Asian American collection.

The Asian Branch Library was founded in 1975 as part of a Federal Library Services Construction Act grant to create a model library serving the Asian community in Oakland with multilingual staff and collections. In 1978, the branch moved from its original location at the Park Boulevard to the Main Library. In 1981, it moved to its own building at 9th Street and Broadway. The current location in the Pacific Renaissance Plaza opened to the public in 1995. 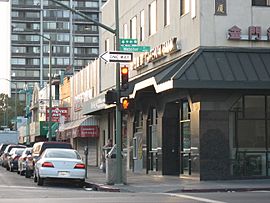 Chinatown is located in Downtown between Broadway to the west, Interstate 880 to the south, Oak Street and Laney College to the east, and 12th Street to the north. The entrance to the Webster Tube, which carries traffic underneath the estuary, is on the edge of Chinatown. Unlike many Chinatowns, it has no formal arch (Paifang) or gate, but it does have bilingual street signs.

The neighborhood can be roughly divided into two distinct areas: Between Broadway and Harrison Street is the commercial area, with busy streets lined with markets, restaurants, banks, and other businesses. East of Harrison Street, the neighborhood is more residential in character with more apartments and condominiums, less crowded sidewalks, and a mix of retail stores that are more service and product oriented, with fewer groceries and restaurants. Though the mainstay of commercial activity is south of 10th Street, there are nonetheless many retail shops, stores, and restaurtants north of 10th Street and in other parts of Downtown Oakland which are owned by Chinese and Korean merchants. In particular at the edge of Chinatown, 14th street between Webster and Harrison is block which features numerous Korean restaurants and businesses, especially on the north side of the block.

All content from Kiddle encyclopedia articles (including the article images and facts) can be freely used under Attribution-ShareAlike license, unless stated otherwise. Cite this article:
Chinatown, Oakland Facts for Kids. Kiddle Encyclopedia.