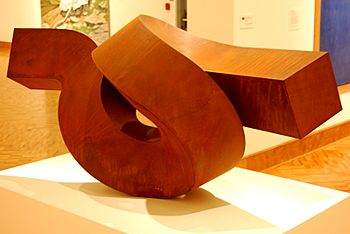 Born Clement Lyon Meadmore in Melbourne, Australia, in 1929, Clement Meadmore studied aeronautical engineering and then industrial design at the Royal Melbourne Institute of Technology. After graduating in 1949, Meadmore designed furniture for several years and, in the 1950s, created his first welded sculptures. He had several one-man exhibits of his sculptures in Melbourne and Sydney between 1954 and 1962. In 1963 Meadmore moved to New York City. Later, he became an American citizen.

Meadmore used COR-TEN steel, aluminum, and occasionally bronze to create colossal outdoor sculptures which combine the elements of abstract expressionism and minimalism. He was an avid amateur drummer and jazz lover who held jam sessions in his home. His fondness for jazz is reflected in the names of several of his works including "Riff" (1996), "Round Midnight" (1996), "Stormy Weather" (1997), "Night and Day" (1979) and "Perdido" (1978).

Meadmore's sculptures are held by museums, corporate headquarters, and schools internationally. His work has been exhibited in a number of galleries, including the Anita Shapolsky Gallery in New York City, the Columbus Gallery of Fine Art in Ohio, and the Davenport Municipal Art Gallery in Iowa.

Meadmore died at age 76 in Manhattan from complications of Parkinson's disease.

All content from Kiddle encyclopedia articles (including the article images and facts) can be freely used under Attribution-ShareAlike license, unless stated otherwise. Cite this article:
Clement Meadmore Facts for Kids. Kiddle Encyclopedia.