Climate of Scotland facts for kids 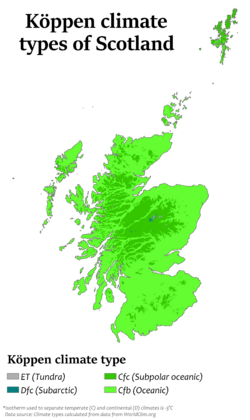 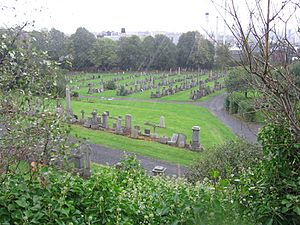 The climate of Scotland is mostly temperate and oceanic (Köppen climate classification Cfb), and tends to be very changeable, but rarely extreme. It is warmed by the Gulf Stream from the Atlantic, and given its northerly latitude it is much warmer than areas on similar latitudes, for example Kamchatka in Russia or Labrador in Canada—where the sea freezes over in winter or Fort McMurray, Canada—where −35 °C (−31 °F) is not uncommon during winter. Scots sometimes describe weather which is grey and gloomy using the Scots language word dreich. 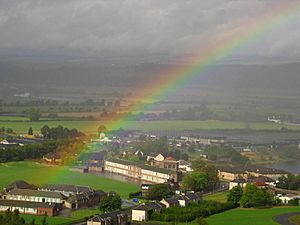 Rainfall totals vary widely across Scotland— the western highlands of Scotland is one of the wettest places in Europe with annual rainfall up to 4,577 mm (180.2 in). Due to the mountainous topography of the western Highlands, this type of precipitation is orographic in nature, with the warm, wet air forced to rise on contact with the mountainous coast, where it consequently cools and condenses, forming clouds. In comparison, much of eastern Scotland receives less than 870 mm (34.3 in) annually; lying in the rain shadow of the western uplands. This effect is most pronounced along the coasts of Lothian, Fife, Angus and eastern Aberdeenshire, as well as around the city of Inverness. Inchkeith in the Firth of Forth receives only 550 mm (21.7 in) of precipitation each year, which is similar to Rabat in Morocco, and less than Barcelona receives per year. Also, as a result of this the north-western coast has about 265 days with rain a year and this falls to the south east to a minimum of about 170 days along the coast to the east of high ground. Snowfall is normally common in the lowlands, but becomes more common with altitude. Parts of the Highlands have an average of 46 to 105 snow days per year, while some western coastal areas have between 42 and 87 with snow a year.

The maximum amount of sunshine in a calendar month was 329 hours in Tiree in May 1946 and again in May 1975 while the minimum, a mere 36 minutes, was recorded at Cape Wrath in the Highlands in January 1983. Dundee is the sunniest city in Scotland. On the longest day of the year there is no complete darkness over the northern isles of Scotland. Lerwick, Shetland, has about four hours more daylight at midsummer than London, although this is reversed in midwinter. Annual average sunshine totals vary from as little as 711–1140 hours in the highlands and the north-west, up to 1471–1540 hours on the extreme eastern and south-western coasts. Average annual sunshine hours over the whole territory are 1160 (taking 1971 to 2000 as standard) meaning that the sun shines just over 25% of the time.

Scotland is the windiest country in Europe due to eastward moving Atlantic depressions that bring strong winds and clouds continuously throughout the year. In common with the rest of the United Kingdom, wind prevails from the south-west. The windiest areas of Scotland are in the north and west; parts of the Western Isles, Orkney and Shetland have over 30 days with gale force winds per year. Vigorous Atlantic depressions, also known as European windstorms, are a common feature in the autumn and winter in Scotland. The strongest wind gust recorded in Scotland was officially 278 kilometres per hour (173 mph) on 20 March 1986 in Cairngorms, but an unofficial wind speed of 312 kilometres per hour (194 mph) was recorded in the same location on 19 December 2008.

All content from Kiddle encyclopedia articles (including the article images and facts) can be freely used under Attribution-ShareAlike license, unless stated otherwise. Cite this article:
Climate of Scotland Facts for Kids. Kiddle Encyclopedia.