Emery is a town in Emery County, Utah, United States. The population was 288 at the 2010 census.

The Fremont culture or Fremont people is a pre-Columbian archeological culture who existed in the area from AD 700 to 1300. It was adjacent to, roughly contemporaneous with, but distinctly different from the Ancestral Pueblo peoples. The culture received its name from the Fremont River, where the first Fremont sites were discovered. The Fremont River in Utah flows from the Johnson Valley Reservoir near Fish Lake east through Capitol Reef National Park to Muddy Creek, whose headwaters begin just north of Emery. 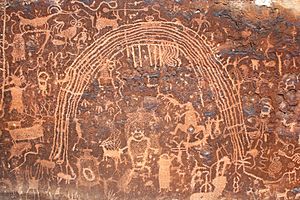 Two significant Fremont culture sites are located north and south of the town. Artifacts such as pottery, manos and metates (millingstones), and weaponry have been found along Muddy and Ivie creeks. Coil pottery, which is most often used to identify archaeological sites as Fremont, is not very different from that made by other Southwestern groups, nor are its vessel forms and designs distinct. What distinguishes Fremont pottery from other ceramic types is the material from which it is constructed. Variations in temper, the granular rock or sand added to wet clay to insure even drying and to prevent cracking, have been used to identify five major Fremont ceramic types. They include Snake Valley gray in the southwestern part of the Fremont region, Sevier gray in the central area, Great Salt Lake gray in the northwestern area, and Uinta and Emery gray in the northeast and southwestern regions. Sevier, Snake Valley, and Emery gray also occur in painted varieties. A unique and beautiful painted bowl form, Ivie Creek black-on-white, is found along either side of the southern Wasatch Plateau. In addition to these five major types found at Fremont villages, a variety of locally made pottery wares are found on the fringes of the Fremont region in areas occupied by people who seem to have been principally hunters and gatherers rather than farmers. The Rochester Rock Art Panel 3 miles (5 km) west of Emery is a significant rock art panel left by the Fremont People and has been the target of vandalism and relic thieves.

The earliest known entrance into the region known as Castle Valley by Europeans dates back to the Spanish explorers. The oldest names in Emery County are Spanish, not Native American — San Rafael, Sinbad, and probably Castle Valley itself, are landmarks of that era when Spanish padres, Spanish American explorers, fur traders, trappers, and frontiersmen followed the Old Spanish Trail through Emery. From about 1776 to the mid-1850s the Old Spanish Trail came up from Santa Fe, New Mexico, crossed the Colorado River at Moab, then the Green River where the city of Green River now stands, across the San Rafael desert into Castle Valley, then crossed along the eastern part of the town. This became the established route of the Spanish slave traders who captured indigenous people along the route and were selling them as slaves.

Map of the Old Spanish Trail through eastern Utah

A sizable herd of wild horses are managed east of Emery. These wild horses and burros have occupied the San Rafael Swell area since the beginning of the Old Spanish Trail in the early 19th century. Early travelers would lose animals or have them run off by Indians or rustlers. Many of these animals were headed for California to be traded and sold and were of good stock. The herd was also augmented through the release of domestic horses from local ranches. By the early 20th century, wild horse and burro numbers had soared and were being captured and sold by local mustangers. This continued until the passage of the Wild and Free-Roaming Horses and Burros Act of 1971. Since the passage of this act, the horses and burros have been managed under federal law and Bureau of Land Management regulation.

In the summer of 1853 Captain John W. Gunnison was sent by the War Department of the United States to explore a railroad route to the Pacific coast. He was assisted by Lt. E. G. Beckwith. They entered Castle Valley and passed near the town in October 1853. Gunnison described the area as follows: "Except three or four small cottonwood trees, there is not a tree to be seen by the unassisted eye on any part of the horizon. The plain lying between us and the Wasatch Range, one hundred miles to the west, is a series of rocky, parallel chasms, and fantastic sandstone ridges. On the north, Roan Cliffs, ten miles from us, present bare masses miles back, a few scattering cedars may be distinguished with the glass. The surface around is whitened with fields of alkali resembling fields of snow. Unless this interior country possesses undiscovered minerals of great value, it can contribute but the merest trifle towards the maintenance of a railroad through it after it has been constructed." 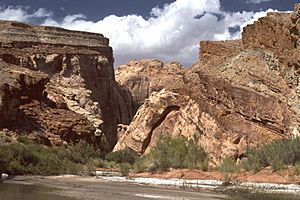 The first settlers to Emery came from Sanpete County, Utah. This is unusually notable as the settlers headed east, instead of west (like most settlers at the time), even if it was over a mountain range. The first attempt at settlement was made at Muddy Creek, a stream following down a wide canyon, and eventually emptying into the Dirty Devil River. The Muddy Creek vegetation included tall grass, sage, greasewood, rabbit brush, tender shadscale or Castle Valley clover, prickly pear cacti, and yucca. Growing along the creek banks were giant cottonwood trees and patches of huge thorny bushes with long needle sharp spines called bull berry bushes. These berries, when beaten off onto a canvas could be dried, made into jams, jellies, or even eaten raw.

Among these early settlers were Charles Johnson, Marenus and Joseph Lund families. Casper Christensen and Fred Acord also brought their families and began to build cabins and plant crops. Joseph Lund, the first to build a small one-room log cabin with a lean-to, became discouraged and left it for Casper Christensen (this building still survives and has been restored and relocated to This Is the Place Heritage Park in Salt Lake City). Most travel came by way of Salina Canyon and Spring Canyon, which weren't much more than deer trails. Roads were bad at best and almost impassable most of the time. The modes of travel were by horseback, team and wagon, or on snowshoes in winter time.

Another company settled farther up the canyon around this same date—families who came from Beaver, Mayfield, and Sterling. They called themselves "The Beaver Brothers". Among these were Dan, Miles, and Samuel Miller, George Collier, Samuel Babbett and others. Some of these became discouraged and left the first year. The Millers moved farther down the lower part of the Muddy Creek canyon. This part has been called Miller's Canyon ever since that time.

Several miles south, on Quitchupah Creek, several families were trying to homestead on land that was more barren than Muddy Creek. In the 1870s, Brigham Young called on several families from Sanpete County to settle on Muddy Creek. Most of the first homes on Muddy Creek were called a dugout. It was a room dug in the side of a hill or the bank of a wash. The front was very crude, sometimes the only door being a blanket hung over the opening, or a rough wooden door, hung with leather hinges. The windows were small openings made in the front wall and covered with heavy greased paper or white canvas. Each had a fireplace in one end, which served for heat, cooking and light. The heat from the fire made the dugout unbearably hot in summer, so then the cooking was done on an open fire outside. The roof of the dugout was made of poles, covered with willows and dirt. These roofs served well in dry weather, as they were warm and kept out the wind. However, they leaked badly in stormy weather. Another great inconvenience of these roofs was the fact that they were a home for snakes, rats, mice and spiders. The floors were usually dirt or sometimes rock.

The settling of this land required bringing the waters of Muddy Creek through a tunnel that took nearly three years to dig. With no trained engineering assistance, the settlers made their calculations, started from opposite sides of the hill, dodged numerous cave-ins of the treacherous Mancos shale, maintained the correct level inside the tunnel and connected both tunnels nearly perfectly. 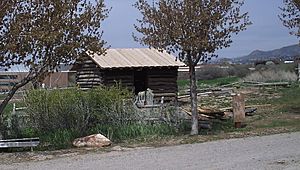 The earliest remaining building from Emery, relocated to This Is the Place Heritage Park in Salt Lake City

1883 was a red-letter year for Casper Christensen. On April 15 he was set apart as the Presiding Elder of the Muddy Creek Branch of the Church of Jesus Christ of Latter-day Saints. On the 26th of August his daughter, Bellette, was born, the first baby girl to be born on the Muddy Creek. September 2 the Emery Ward was organized with Casper Christensen as bishop. Then on November 19 he was officially appointed postmaster at Muddy, in the County of Emery in the Utah Territory. His daughter, Hannah, was appointed as his assistant.

When Casper Christensen was first appointed postmaster and bishop, a postal inspector found him working in the field and tried to make him understand that he wanted to inspect his postal records. Finally in desperation he said, "You don't seem to know who I am. I am a postal inspector." Brother Casper indignantly replied, "And YOU don't know who I am. I'm the Bishop on the Creek!" Town residents have continued to use this phrase when dealing with someone who was self-important. 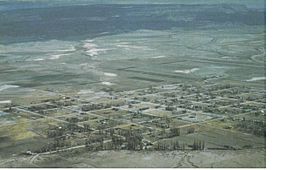 The town of Emery, circa 1950, taken from "the Mountain" northwest of the town

Muddy Creek and Quitchupah residents consolidated on this new townsite. Log cabins were built as soon as logs could be hauled from the nearby mountains. The logs were smoothed on one side with grooves chopped in each end. They were then placed on top of each other with the smooth side facing inward. Chinks between the logs were filled with mud or clay. Willows were used for lath, nailed to the logs and plastered with mud. This mud was then rubbed smooth and painted with a whitewash of lime. The roofs were made of rough lumber, and covered with a layer of straw or brush and then a top layer of dirt. Later the roofs were greatly improved when cedar shingles became available.

The town of Muddy would later change to "Emery", after Governor George W. Emery. However, both names would be synonymously used. Emery has always been an agricultural community. Ranching and farming is its major livelihood. The town would swell in population to have its own school, but after World War II, the population has decreased due to lack of economic opportunities and has generally hovered around 300 residents. The discovery of coal, south of the town, led to several mines being developed and the idea that the town could once again draw in new residents. However, with the decrease in coal prices, production has not required the initiation of new mining operations.

On November 2, 1967, the Last Chance Motel was destroyed by a cone-shaped F2 tornado. Furniture and bedding were thrown hundreds of yards. The tornado occurred at the unusual time of 5:30 am, and no injuries were reported.

According to the United States Census Bureau, the town has a total area of 1.2 square miles (3.0 km2), all land.

There were 123 households out of which 29.3% had children under the age of 18 living with them, 61.0% were married couples living together, 6.5% had a female householder with no husband present, and 27.6% were non-families. 26.8% of all households were made up of individuals and 12.2% had someone living alone who was 65 years of age or older. The average household size was 2.50 and the average family size was 3.03. 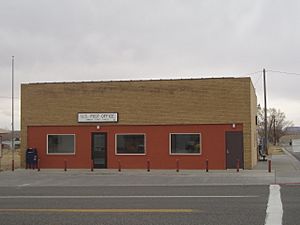 All content from Kiddle encyclopedia articles (including the article images and facts) can be freely used under Attribution-ShareAlike license, unless stated otherwise. Cite this article:
Emery, Utah Facts for Kids. Kiddle Encyclopedia.