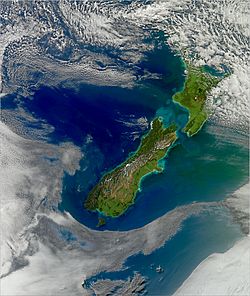 The environment of New Zealand is characterised by an endemic flora and fauna which has evolved in near isolation from the rest of the world. The main islands of New Zealand span two biomes, temperate and subtropical ,complicated by large mountainous areas above the tree line. There are also numerous smaller islands which extend into the subantarctic. The prevailing weather systems bring significantly more rain to the west of the country. New Zealand's territorial waters cover a much larger area than its landmass and extend over the continental shelf and abyssal plateau in the South Pacific Ocean, Tasman Sea and Southern ocean.

Historically having an isolated and endemic ecosystem far into modernity, the arrival of Polynesians about 1300 AD and then later European settlers began to have significant impacts on this system, with the intentional and unintentional introduction of new species and plants which often overwhelmed their natural competitors, leading to a significant loss of native ecology and biodiversity, especially in areas such as bird life.

Today, most parts of New Zealand are heavily modified by the effects of logging, agriculture and general human settlement, though large areas have also been placed under protection, combined in many cases with efforts to protect or regenerate native ecosystems (aided by the fact that especially the South Island of New Zealand has a very low population density). 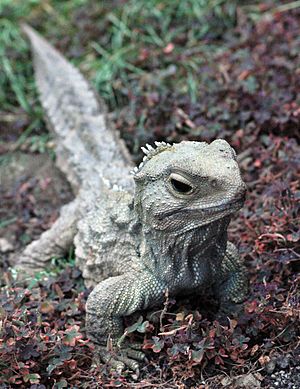 A tuatara, an endangered reptile found only in New Zealand. Eighty percent of New Zealand's biota is endemic.

The biota of New Zealand is one of the most unusual on Earth, due to its long isolation from other continental landmasses. Its affinities are derived in part from Gondwana, from which it separated 82 million years ago, some modest affinities with New Caledonia and Lord Howe Island, both of which are part of the same continental plate as New Zealand and in part from Australia.

More recently a component has been introduced by humans. New Zealand's biodiversity exhibits high levels of endemism, both in its flora and fauna. Until recently the islands had no native terrestrial mammals except for bats (although terrestrial, "archaic" mammals did exist in New Zealand until 19 million years ago, in the form of the Saint Bathans mammal), the main component of the fauna being insects and birds. Its flora is dominated by Gondwanan plants, comprising historically of forests, most famously the giant kauri. New Zealand has developed a national Biodiversity Action Plan to address conservation of considerable numbers of threatened flora and fauna within New Zealand. 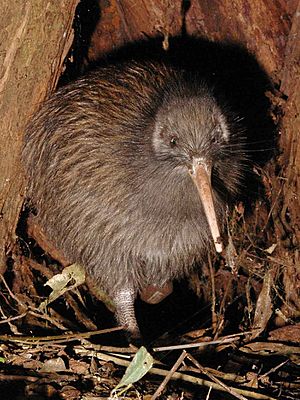 Conservationists recognised that threatened bird populations could be saved on offshore islands, where, once predators were exterminated, bird life flourished again. Around 30 species are listed as endangered. The kiwi, a national symbol, is also under threat. A curious bird, it cannot fly, has loose, hair-like feathers and long whiskers, and is largely nocturnal.

The only terrestrial mammals that were in New Zealand prior to human habitation were three species of bat. A number of marine mammals are found on the coast and waters of New Zealand. Maori and European settlers introduced a wide range of mammals some of which have become serious invasive species.

New Zealand has a richly varied flora of imported and native species, the indigenous varieties having developed quite significantly due to the geographic isolation of the country before human migration and plant imports became common. However, the combination of external factors such as climate change and invasive species, as well as increasing agricultural and other human land uses have led to widespread damage. New Zealand's forest ecosystems for example are being considered as the second most endangered of the world, with only 7% of the natural habitat remaining.

The climate varies from cool temperate in the south and warm temperate in the north, with the exception of the North Island Volcanic Plateau. Rainfall varies from a low of 325 mm in Central Otago to an average of 5-8,000 mm in Fiordland. Most lowland areas have ample rainfall for farming and habitation. In the South Island, the high Southern Alps, which run north–south, cause a marked difference between the west and east coast climates. 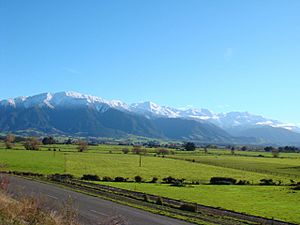 For a small country the geography is extremely varied in both landforms and altitude. New Zealand's landscape ranges from the fjord-like sounds of the southwest to the tropical beaches of the far north. South Island is dominated by the Southern Alps, the highest peak of which is Aoraki/Mount Cook, at 3,724 metres (12,218 ft). The tallest peak on North Island is Mount Ruapehu (2,797 m), an active, cone-shaped volcano.

Nearly 30 percent of the land mass of New Zealand is in public ownership and has some degree of protection. The level of protection varies according to the land status.

State of the Environment reporting

In 2007, the Organisation for Economic Co-operation and Development (OECD) conducted an environmental performance review of New Zealand. Some of the main conclusions and recommendations were that: 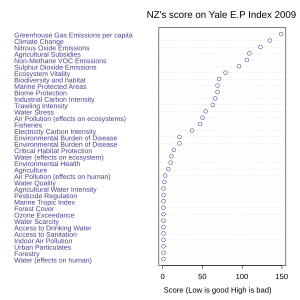 The Environmental Performance Index (EPI) is a method of quantifying and numerically benchmarking the environmental performance of a country's policies. It results in a score out of 100. In 2016 New Zealand scored 88 out of 100, and ranked 11 out of 132 countries. In 2010, in terms of ecosystem effects on water quality New Zealand scored 40.3 points out of 100 for ecosystem vitality for freshwater and was ranked 43rd out of 132 countries.

The Values Party, the first ever national level environmental party, was formed in 1973. The Green Party of Aotearoa New Zealand, which was formed in 1991 and included some members from the defunct Values Party, was initially in Parliament as part of the Alliance Party. They currently have nine MPs that put forward green political ideology.

The most significant Act of Parliament concerning environmental law was the passing of Resource Management Act in 1991. Issues under the Act are adjudicated by the Environment Court of New Zealand.

New Zealand is a signatory to a number of treaties and international agreements:

New Zealand is a depositary to the following environmental treaties:

There are a number of different sources for environmental funding in New Zealand.

The Nature Heritage Fund is a New Zealand Government funding body set up in 1990, and administered by the Department of Conservation, for the purchase of land which has significant ecological or landscape features.

To support community efforts, the Community Conservation Fund is available. Funding is for established community groups that have an ecological restoration project on public land that can be sustained after the two year funding period.

There are also Biodiversity Funds.

All content from Kiddle encyclopedia articles (including the article images and facts) can be freely used under Attribution-ShareAlike license, unless stated otherwise. Cite this article:
Environment of New Zealand Facts for Kids. Kiddle Encyclopedia.