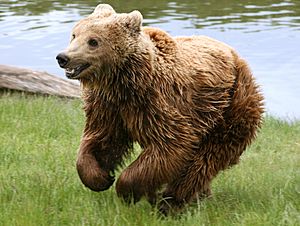 Bears are known to attack humans for many reasons but actually they avoid attacking. One reason is that if you surprise a bear it is likely to attack. The other one, is that bears enjoy to eat food, which is why people tend to avoid leaving food in the forest where bears are.

The Eurasian brown bear is a omnivore (which eats everything). For example, they eat:

Brown bears were present in Britain until no later than 1000 AD, when they had been exterminated through over-hunting.

Eurasian brown bears were used in Ancient Rome for fighting in arenas. The strongest bears apparently came from Caledonia and Dalmatia.

In antiquity, the Eurasian brown bear was largely carnivorous, with 80% of its diet consisting of animal matter. However, as its habitat increasingly diminished, the portion of meat in its diet decreased with it until by the late Middle Ages, meat consisted of only 40% of its dietary intake. Today, meat makes up little more than 10–15% of its diet. Whenever possible, the brown bear will consume sheep.

Unlike in North America, where an average of two people a year are killed by bears, Scandinavia only has records of three fatal bear attacks within the last century. 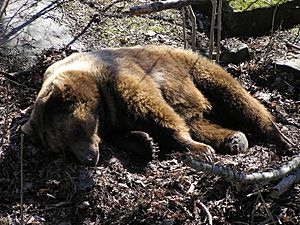 The oldest fossils are from the Choukoutien, China, and date back about 500,000 years. It is known from mtDNA studies that during the Pleistocene ice age it was too cold for the brown bear to survive in Europe except in three places: Russia, Spain, and the Balkans.

Modern research has made it possible to track the origin of the subspecies. The species to which it belongs developed more than 500,000 years ago, and researchers have found that the Eurasian brown bear separated about 850,000 years ago, with one branch based in Western Europe and the other branch in Western Europe, Russia, Eastern Europe and Asia. Through research of mitochondrial DNA (mtDNA), researchers have found that the European family has divided into two clades—one in the Iberian Peninsula and the Balkans, the other in Russia.

There is a population in Scandinavia that includes bears of the western and eastern lineages. By analyzing the mtDNA of the southern population, researchers have found that they have probably come from populations in the Pyrenees in Southern France and Spain and the Cantabrian Mountains (Spain). Bears from these populations spread to southern Scandinavia after the last ice age. The northern bear populations originate from the Finnish/Russian population. Probably their ancestors survived the ice age in the ice-free areas west of the Ural Mountains, and thereafter spread to Northern Europe. 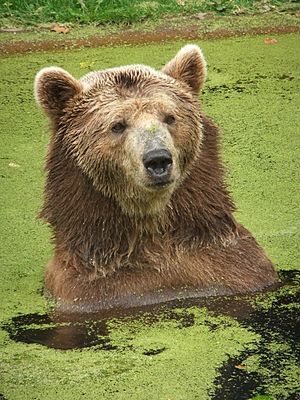 Although included as of Least Concern on the 2006 IUCN Red List of Threatened Species (which refers to the global species, not to the Eurasian brown bear specifically), local populations are becoming increasingly scarce. And as the IUCN itself adds:

"Least Concern does not always mean that species are not at risk. There are declining species that are evaluated as Least Concern."

Brown bears could once be found across most of northern Eurasia.

The brown bear has long been extinct in Ireland and Britain, but still exists in Northern Europe and in Russia. There is a small but growing population (at least 35 bears) in the Pyrenees, on the border between Spain and France, which was once on the edge of extinction, as well as two subpopulations in the Cantabrian Mountains in Spain (amounting to around 250 individuals). There are also populations totalling around one hundred bears in the Abruzzo, South Tyrol and Trentino regions of Italy.

Populations in Baltoscandia are slowly increasing. They include over 2000 bears in Sweden, another 1200 in Finland, 700 in Estonia and around 70 in Norway. Large populations can be found in Romania (around 6000 individuals), Slovakia (700-900), Bosnia and Herzegovina, Croatia (1200), Slovenia (500-700), Macedonia, Bulgaria, Poland, and Georgia; smaller but still significant populations can also be found in Albania, Kosovo, Bosnia and Herzegovina, Greece, Serbia, and Montenegro. In 2005, there were an estimated 200 in Ukraine; these populations are part of two distinct metapopulations: the Carpathian with over 5000 individuals, and the Dinaric-Pindos (Balkans) with around 3000 individuals.

The largest brown bear population in Europe is in Russia, where it has now recovered from an all-time low caused by intensive hunting.

Globally, the largest population is found east of the Ural mountain range, in the large Siberian forests; brown bears are also present in smaller numbers in parts of central Asia (former Soviet states).

Other clades of brown bear persist in small, isolated and for the most part highly threatened populations in Turkey, Iran, Afghanistan, Pakistan, parts of northwest India and central China, and on the island of Hokkaidō in Japan.

Bears of this subspecies appear very frequently in the fairy tales and fables of Europe, in particular tales collected by Jakob and Wilhelm Grimm. The European brown bear was once common in Germany and alpine lands like Northern Italy, Eastern France, and most of Switzerland, and thus appears in tales of various dialects of German.

The bear is traditionally regarded as the symbol of Russian (military and political) might. It is also Finland's national animal; and in Croatia, a brown bear is depicted on the reverse of the Croatian 5 kuna coin, minted since 1993.

All content from Kiddle encyclopedia articles (including the article images and facts) can be freely used under Attribution-ShareAlike license, unless stated otherwise. Cite this article:
Eurasian Brown Bear Facts for Kids. Kiddle Encyclopedia.