Exsanguination is losing enough blood to cause death. A person does not have to lose all of their blood to exsanguinate. People can die from losing half to two-thirds of their blood.

The average adult has about 5 to 6 liters of blood in their body (women, and people who weigh more, have more blood). This means a person can die from losing 2 1/2 to 4 liters of blood. To compare, this is five to eight times as much blood as people usually give in a blood donation.

Exsanguination is often called bleeding to death or bleeding out. It is a medical emergency. 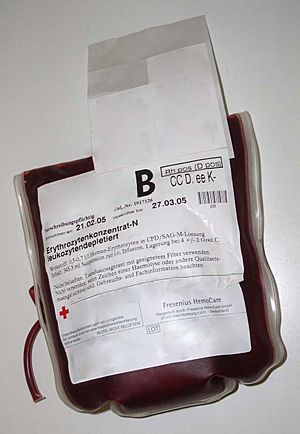 A half liter of blood (enough for one blood transfusion). If an average adult lost 5 to 8 times this much blood, they could die from exsanguination

Bleeding can be external or internal.

Exsanguination is usually caused by major blood vessels getting injured or breaking open. Smaller blood vessels bleed less, and bleed slower, so it is harder to exsanguinate if they are injured.

Exsanguination can be caused by trauma (injuries). Out of everyone who dies from injuries, 30-40% die from exsanguination. Up to half of these people (33-56%) die before they even get to the hospital.

Penetrating trauma (an injury where something breaks the skin) is one of the most common causes of exsanguination. This is especially true for gunshot wounds to places like the heart, chest, or head, which all have major blood vessels in them.

Other injuries that can cause exsanguination include:

A person can exsanguinate from internal bleeding if:

Exsanguination is one of the most common causes of death in soldiers at war. It is usually caused by gunshot wounds, motor vehicle accidents, or explosions. 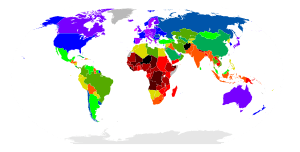 Some medical problems can make a person exsanguinate by bleeding internally. These problems include: 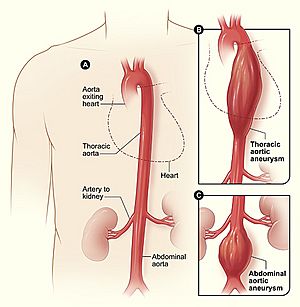 Figure A shows a normal aorta. Figures B and C show aneurysms in parts of the aorta. When an aneurysm breaks (like a popped balloon), a person can exsanguinate in just minutes.

If a person is losing blood very quickly (for example, from a broken aortic aneurysm), they will only be conscious for 20 seconds to a few minutes. If blood loss is slower, and the person does not get medical treatment, they may be conscious for a few hours. However, they will get more and more confused and tired as they lose more blood. Eventually the person will go into a coma because there is not enough blood left in their body to bring oxygen to their brain. Finally their heart will stop and they will die.

Exsanguination is a syndrome

Doctors call exsanguination a syndrome (a group of symptoms), because it causes so many problems in the body.

Blood helps keep us warm. Because of this, losing a lot of blood causes hypothermia.

Acidosis means that the body makes too much acid. Usually, the body makes energy out of oxygen (carried in blood) and glucose (sugar). (This is called aerobic respiration.) If a person loses a lot of blood, there will not be enough oxygen in the blood that is left to make energy this way. The body switches to anaerobic respiration, and makes energy out of glucose without needing oxygen. However, this creates many acidic waste products (chemicals that the body does not need, which are left over after the body does chemical reactions). Eventually these waste products can build up so much that they poison the body. This is called acidosis.

When the heart does not get enough blood, it can start beating in ways that are not normal. When this happens because of exsanguination, it usually means that the patient is close to dying.

If a person loses enough blood, they will go into shock. This means the body's most important organs are not getting the blood, oxygen, and nutrients they need to survive. It also means that the body is not able to get rid of waste products, like acids. If shock gets bad enough, it will kill the person. 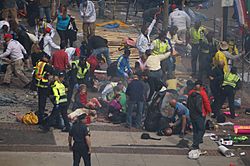 First aid is an important first step in treating exsanguination. Things that regular people can do to help include:

First aid saved many lives during the Boston Marathon bombings, when ordinary people used belts for tourniquets or used their own hands to press against bleeding wounds. The three people who died in the bombings died right away. There were many other people who were hurt badly enough that they could have exsanguinated. For example, some people's legs were blown off by the bombs. However, because of the help of ordinary people giving first aid (and because of emergency medical services), everyone who did not die right away survived.

Emergency medical treatments for exsanguination include:

There are some risk factors which make a person more likely to exsanguinate. A few examples are:

Risk factors for death from exsanguination

When a person is exsanguinating, they are more likely to die if:

All content from Kiddle encyclopedia articles (including the article images and facts) can be freely used under Attribution-ShareAlike license, unless stated otherwise. Cite this article:
Exsanguination Facts for Kids. Kiddle Encyclopedia.