Fauna of Nevada facts for kids 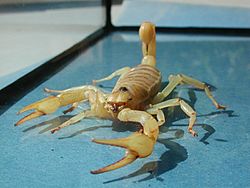 The fauna of the U.S. State of Nevada is mostly species adapted to desert, temperature extremes and to lack of moisture. With an average annual rainfall of only about 7 inches (180 mm), Nevada is the driest – and has the largest percentage of its total area classified as desert – of all states in the United States. Two-thirds of the state is located within the largest desert on the North American continent, the Great Basin Desert, while the lower one-third is the Mojave Desert.

The smaller Smoke Creek Desert and Black Rock Desert are located in the northwest, while other deserts include the Yp Desert, Tule Desert, Forty Mile Desert, Owyhee Desert and the Amargosa Desert. Nevada is located within the Nearctic faunistic realm in a region containing an assemblage of species similar to Northern Africa . 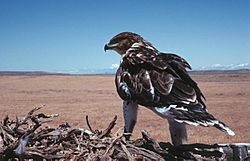 A dark-morph ferruginous hawk on nest.

A total of more than 480 species of birds have been recorded in Nevada, and of these, 300 species have either nested or are estimated to occur with regularity in the state. The majority of Nevada’s breeding birds are landbirds, but a large percentage of the priority species are shorebirds and waterbirds, reflecting the importance of water bodies in the desert. 78 species of Nevadan birds are currently identified as priority species. These birds are subdivided into 70 Conservation priority species, five Stewardship species, and three Special Status species. 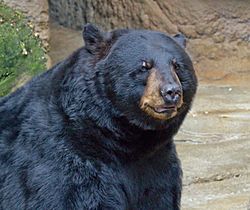 More than 250 American black bears currently live on the Nevadan side of Lake Tahoe. 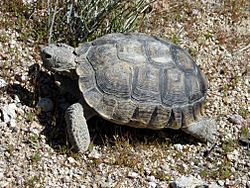 The desert tortoise is a native of the Mojave Desert in Southern Nevada.

The desert tortoise, which can live up to seventy years, is found in southwestern Nevada and is the largest reptile in the southwestern United States. In parts of the state, the population has decreased thirty to fifty percent due to predation, disease, vandalism and illegal collection by humans.

Nevada has 48 species of fish living in its 600 rivers and more than 200 lakes. Large lakes with several species of fish include for instance Pyramid Lake, Lake Tahoe, Lake Mead, Lake Mohave, Franklin Lake and Walker Lake. At least 12 of Nevada’s fishes are endemic to Nevada waters – they occur here and exist nowhere else in the world. Examples of endemic Nevadan fish are Devil's Hole pupfish in Devils Hole, moapa dace in Muddy River and the Cui-ui in Pyramid Lake and Truckee River.

All content from Kiddle encyclopedia articles (including the article images and facts) can be freely used under Attribution-ShareAlike license, unless stated otherwise. Cite this article:
Fauna of Nevada Facts for Kids. Kiddle Encyclopedia.