The zoo continuously ranks among the top zoos in the U.S. In 2015, TripAdvisor named it the seventh best zoo in the nation.

The FWCZ can trace its origins to 1952 when 54 acres (22 ha) were added to Franke Park in Fort Wayne, Indiana, to establish a nature preserve. Local popularity of the preserve led to Fort Wayne officials deciding to build a full-fledged zoo by 1962. The zoo's mission was to educate children about animals.

On July 3, 1965, the new Fort Wayne Children's Zoo opened on 5.5 acres (2.2 ha) with 18 animal exhibits. In 1976, a major expansion of the zoo was the African Veldt attraction, where savanna animals grazed in open fields east of the Central Zoo. In 1987, the Australian Adventure premiered, showcasing animals from the Outback. A domed Indonesian Rain Forest exhibit opened in 1994, with Orangutan Valley opening a year later, and Tiger Forest in 1996.

On May 18, 2004, 7.5-year-old "Coolah," the last remaining Tasmanian devil to live outside of Australia, died from complications of inoperable cancer. Coolah had drawn international attention to the zoo once Australia banned the export of Tasmanian devils after the species became endangered. Over the years, the zoo was home to 12 Tasmanian devils, the most of any zoo in the U.S.

On July 1, 2015, the zoo celebrated its 50th anniversary with about 400 guests. The 47th Three Rivers Festival parade honored the occasion, with the theme "Here's to Zoo."

On March 3, 2020, the zoo announced that longtime Executive Director Jim Anderson would retire at the end of the 2020 season, bringing to a close a career of 40-plus years overseeing and driving much of the Zoo’s growth into a nationally recognized attraction. Anderson has served as the Zoo’s executive director since 1994, when he succeeded its founding executive director, Earl Wells. On September 1, 2020, The Board of Directors announced Rick Schuiteman from the San Diego Zoo would replace Anderson as the new Executive Director.

The zoo consists of four self-contained biomes themed as different regions of the world.

One of the zoo's most famous animals, Bill the lion, was euthanized on April 6, 2016, due to an aggressive cancer. Zoo officials spotted the cancer only 7 days before Bill had to be euthanized. [1]

The Australian Adventure houses the majority of the Zoo's Australian animals.

The former Australian Adventure area opened with Australia After Dark exhibit, featuring nocturnal animals native to Australia such as bats, echidnas, and owls. A separate building held a 20,000-gallon aquarium containing the Sharks, Rays, and Jellyfish Exhibit, as well as a model coral reef with tropical fish. In the Kangaroo Walkabout, a roped path lead through an open area of kangaroos, which may cross the path at their leisure. The dingo exhibit held a mating pair and produced and housed a new litter of dingo pups in 2012. An aviary featured birds native to Australia. There were other assorted exhibits, and a Dugout Canoe Ride where you could view the Australian Adventure from a canal.

The new Australian Adventure is roughly the same, except a Stingray exhibit replacing Australia After Dark and a new Aquarium (both accessed by a new plaza), and several other new buildings, including a new exhibit for Tasmanian devils 1.

The Central Zoo includes assorted animals from the Americas and a few from other regions, including canada lynx, ring-tailed lemurs, African penguins, otters, tortoises, alligators and macaws. Sea Lion Beach is a major attraction full of California sea lions. Sea Lion Beach has a scheduled feeding performances occur periodically throughout the day. Monkey Island contains a family of Panamanian white-faced capuchins. Peacocks roam freely throughout the farm. Also located in the Central Zoo is a duck pond. 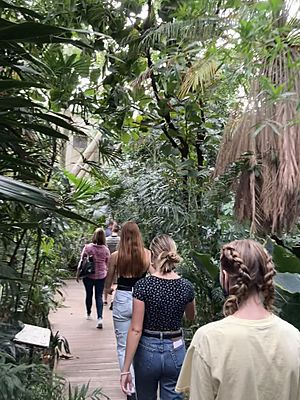 The recently added Indiana Family Farm expands from the old petting zoo area, which contained only goats, wild turkeys, ravens, chickens, and white-tailed deer. Now a model barn and farmhouse, as well as signs from the point of view of children living on a farm, lend atmosphere. Horses, sheep, rabbits, calves, and others are all contained in open stalls and maybe pet by visitors. Barn mice and other small animals can be viewed. Goats reside in an open paddock which visitors can enter, and, for a price, feed the goats pellets from ice cream cones and milk from bottles, or brush them for free. This area is considered part of the Central Zoo and is located directly before the exit. The Wild Things Gift Shop at the exit was recently expanded.

This area also offers rides on a miniature train and pony rides.

The Indonesian Rain Forest features orangutans, tigers, Komodo dragons, reticulated pythons, clouded leopards, assorted birds, mammals, and primates, as well as a domed area (Domeaviary) containing birds, fish, reptiles, and, until recently, butterflies. The domeaviary allows visitors to experience the sights, sounds, and feel of a rain forest, along with a display of a skeletal display of an Asian elephant and a skull of a Sumatran rhinoceros. This area also has an Endangered Species Carousel.

Early in the morning of Saturday, November 22, 2014, Tara, a 19-year-old Sumatran orangutan, whose pregnancy was announced in October 2014 (orangutans are critically endangered), gave birth to a healthy female baby. The baby's father is a 28-year-old male named Tengku. Tengku arrived in Fort Wayne in 1995, from Zoo Atlanta, and Tara arrived in 2013 from the Columbus Zoo; orangutan gestation is normally 245 days. Though Tara had never given birth before and had never observed other females of her species caring for their offspring, Fort Wayne officials, having observed her after the birth, are cautiously optimistic, having prepared for these potential obstacles when, after agreeing to try and breed them on the recommendation of the Association of Zoos and Aquariums' Orangutan Species Survival Plan program, they formulated a detailed Birth Management Plan.

The baby orangutan, named Asmara, who was born on November 22, 2014, has made Orangutan Valley a popular destination in the zoo, as guests can frequently spot her and her mother Tara in the enclosure. The other adult male orangutan in this facility is named Owen who is a hybrid orangutan and not under any breeding recommendations, thus he is spayed. He also serves a role as a father figure to Asmara.

The Treetop Trail is a boardwalk pathway where visitors can view and observe rare animals, such as the prevost's squirrel, wrinkled hornbill, Javan gibbon and white-crested laughing thrush.

The Fort Wayne Children's Zoo offers several kid friendly rides that are available for a nominal charge. Guests can purchase tokens to ride the rides.

The Sky Safari, a ski lift-like ride, gives riders an aerial view of the Serengeti-based landscape and is located in the African Journey area of the Zoo.

The Central Zoo offers rides on a miniature train and a pony trail where kids can ride ponies.

All content from Kiddle encyclopedia articles (including the article images and facts) can be freely used under Attribution-ShareAlike license, unless stated otherwise. Cite this article:
Fort Wayne Children's Zoo Facts for Kids. Kiddle Encyclopedia.