Frank Pepe Pizzeria Napoletana, commonly known as Pepe's is a popular pizza restaurant in the Wooster Square neighborhood of New Haven, Connecticut, at 163 Wooster Street. Opened in 1925, it is one of the oldest and best known pizzerias in the United States.

Pepe's was founded in 1925 by Frank Pepe (April 15, 1893 – September 6, 1969), an Italian immigrant. Pepe was born in Maiori, Italy, and immigrated to New Haven in 1909 when he was a teenager. The quintessential Wooster Square Italian immigrant took a job at a New Haven factory, but wasn't fond of continuing there. During World War I, Pepe went back to Italy to fight for his native country. Upon returning, he soon landed a job working at a bakery on Wooster Street. Pepe began walking through the Wooster Square market and sold his "tomato pies" off of a special headdress. After saving enough money, he was able to buy a wagon from which he sold his pizzas. He was so successful that he was eventually able to take over his employer's business and turn it into the first "Frank Pepe Pizzeria Napoletana" on June 16, 1925. Frank Pepe died on September 6, 1969.

Pepe's originated the New Haven-style thin-crust apizza (closely related to Neapolitan-style Italian pizza) which he baked in a coal-fired brick pizza oven. Originally, Frank Pepe only made two varieties of pizza: the "tomato pie" (tomatoes with grated pecorino romano cheese, garlic, oregano, and olive oil) and the other with the addition of anchovy.

The piece of land which Pepe's restaurant sat on was owned by the Boccamiello family. They later made Frank Pepe leave so that they could start their own pizzeria at the establishment, which they renamed The Spot. Pepe moved his restaurant to its current location next door to The Spot in 1936. The Pepe family later bought back The Spot from the Boccamiello family in 1981 and it now serves the same menu as the newer restaurant.

In the alleyway between The Spot and Pepe's, Boccamiello's nephew Bear would open clams and sell them on the half shell to passersby. Pepe's restaurant began serving littleneck clams on the half shell at the bar. It was only a matter of time before he decided to put the clams on the pizza. The white clam pie is just crust, olive oil, oregano, grated cheese, chopped garlic, and fresh littleneck clams. The restaurant will serve the pizza with or without mozzarella cheese, but they try to discourage customers from ordering it with mozzarella because they feel that it makes the pizza too heavy and rich. They are also adamant on using freshly shucked clams as opposed to canned clams; if fresh clams are not available then they will not serve the white clam pie. Three men are employed by Pepe's just for shucking the clams on location. Since its invention, the white clam pie has become the signature pizza of pizzerias in New Haven.

In March, 2015 Pepe's released their plans to expand into the Boston market. On December 16, 2015 they opened their Chestnut Hill location.

On June 10, 2019, the newest Pepe's opened at the Burlington Mall in Burlington, MA, in a location that formerly housed a Pizzeria Uno. 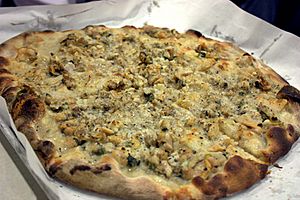 A white clam pie from Pepe's 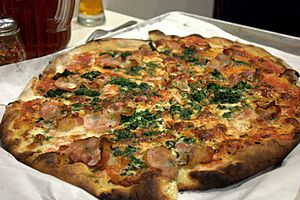 A red pie with bacon and spinach

Pepe's has expanded outside of New Haven as a small family owned chain. Nine relatives are co-owners of the chain, including grandsons Gary Bimonte and Francis Rosselli. All locations feature the same green and white design of their building and fixtures, serve on the square pizza pans and use the same suppliers for their ingredients.

Another Wooster Street pizza restaurant, Sally's Apizza, was founded by Pepe's nephew Sal Consiglio in 1938. Sally's and Pepe's have a long friendly rivalry and pizza fans are divided over which serves the better pizza. Frank Sinatra, for example, was a fan of Sally's, while President Ronald Reagan preferred Pepe's.

Pepe's is a busy establishment, and New Havenites will cheerfully wait in line outside the restaurant for hours in all kinds of weather. Having to wait to be seated is almost as much of a New Haven tradition as the pizza itself. Pepe's is also a major tourist attraction in New Haven.

Pepe's is one of three pizza restaurants featured in the documentary film Pizza A Love Story, directed by Gorman Bechard. The love story to New Haven's holy trinity of pizza restaurants, Pepe's, Sally's, and Modern, had its world premiere at IFFBoston in April 2019. The film was released on DVD and pay-per-view on September 29, 2020. In reviewing the film, Deborah Brown of The Swellesley Report called it “An important film of staggering genius that needed to be made.”

All content from Kiddle encyclopedia articles (including the article images and facts) can be freely used under Attribution-ShareAlike license, unless stated otherwise. Cite this article:
Frank Pepe Pizzeria Napoletana Facts for Kids. Kiddle Encyclopedia.