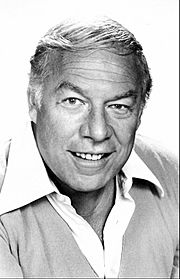 Kennedy was born on February 18, 1925 in New York City. He studied at Chaminade High School and at Tarleton State University. He married Dorothy Gillooly in the 1940s. He was married to Norma Wurman from 1959 until they divorced in 1971. He remarried Wurman in 1973; they divorced again in 1978. He was married to Joan McCarthy from 1978 until her death in 2015. He had two children. He lived in Eagle, Idaho.

Kennedy died in a retirement home in Middleton, Idaho from heart disease on February 28, 2016 at the age of 91.

All content from Kiddle encyclopedia articles (including the article images and facts) can be freely used under Attribution-ShareAlike license, unless stated otherwise. Cite this article:
George Kennedy Facts for Kids. Kiddle Encyclopedia.