Henrietta of England facts for kids

Henrietta of England (16 June 1644 (26 June n.s.) – 30 June 1670) was born a Princess of England and Scotland as the youngest daughter of King Charles I of England and his consort Henrietta Maria of France. Fleeing England with her governess aged three, she moved to the court of her first cousin Louis XIV of France. She was known as Minette. She married Philippe of France, Monsieur, brother of King Louis XIV, and became known as Madame at court. Very popular with the court, Henriette was known for her flirtatious nature which was the cause of various arguments between husband and wife. Louise de La Vallière and Madame de Montespan were part of her household prior to being Louis XIV's mistresses. Henriette was instrumental to the completion of the Secret Treaty of Dover prior to her unexpected death in June 1670. The reason for her death has never been conclusively determined; while some argue that it was by poison administered by her husband's lover the Chevalier de Lorraine, historians have also argued that she was felled by a perforated peptic ulcer. The Jacobite claims to the throne following the death of Henry Benedict Stuart descend from her through her daughter Anne Marie, Queen of Sardinia. 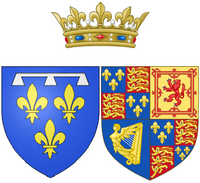 All content from Kiddle encyclopedia articles (including the article images and facts) can be freely used under Attribution-ShareAlike license, unless stated otherwise. Cite this article:
Henrietta of England Facts for Kids. Kiddle Encyclopedia.