Hollister is a city in and the county seat of San Benito County, California, United States. The population was 34,928 at the 2010 census. Hollister is primarily an agricultural town.

The Mutsun Ohlone Indians were the first known inhabitants of the Hollister region.

The town, then located in Monterey County, was founded November 19, 1868 when the San Justo Homestead Association purchased the property from William Welles Hollister (1818–1886). Undecided about a name for the new town, an association member, Napa vintner Henry Hagen, was tired of Saint and Spanish names in nearby towns and suggested the name Hollister. The City was incorporated on August 29, 1872. The western portion of San Benito County, including Hollister, was separated from Monterey County in 1874. The county was expanded eastward in 1887 to include portions taken from Merced and Fresno Counties. 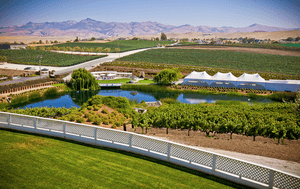 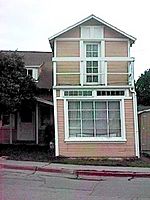 A local home suffering from structural distortion as a result of being situated on top of the Calaveras Fault.

Hollister is well-known among geologists because it portrays one of the best examples of aseismic creep anywhere in the world. The Calaveras Fault (a branch of the San Andreas Fault system) bisects the city north and south, roughly along Locust Ave. and Powell St. The streets running east/west across the fault have significant visible offsets. The fault runs directly under several houses. Even though they are visibly contorted the houses are still habitable as the owners have reinforced them to withstand the dislocation of their foundations. Although there was extensive damage in the town after the 1989 Loma Prieta earthquake, and the governor of California came to visit, this was due to a slip of the San Andreas Fault and was not related to the aseismic creep on the Calaveras Fault.

Hollister is one of at least three California towns to claim the title of "Earthquake Capital of the World" the other two being Coalinga and Parkfield.

Hollister has a warm-summer mediterranean climate (Köppen csb) that has warmer summers than the Monterey–Salinas area but also being cooler than many other inland cities of the central part of the state. Despite this, daytime temperatures of 80 °F (27 °C) or warmer are commonplace between June and October, but hot extremes can be much more severe.

There were 9,716 households out of which 52.2% had children under the age of 18 living with them, 65.3% were married couples living together, 12.2% had a female householder with no husband present, and 17.2% were non-families. 12.7% of all households were made up of individuals and 4.7% had someone living alone who was 65 years of age or older. The average household size was 3.52 and the average family size was 3.82.

From 2002 to 2008, Hollister experienced a state-mandated building moratorium due to inadequate wastewater infrastructure.

The Hollister Hills Vehicular Recreation Area, southwest of the main town, draws over 100,000 vehicles per year.

The city is intermittently the site of an annual motorcycle rallies around July Fourth. The riot at the original 1947 event was the basis for the 1953 film The Wild One. The rally was revived in 1997 as the Hollister Independence Rally.

In 2005, the Hollister City Council discontinued their contract with the event organizers, the Hollister Independence Rally Committee, due to financial and public safety concerns. The event was canceled in 2006 due to lack of funding for security, but returned in 2007 and 2008. The format of the rally in 2007 differed markedly from previous rallies, with vendors on San Benito Street instead of motorcycles. The bikes were forced to park on side streets and a strict downtown curfew was imposed, with the entire area being locked up at 9:00 pm. This event was popular with bikers and some local establishments profited, but the city footed the bill for much of the expenses and was left liable when organizers filed bankruptcy.

The 2009-2012 rallies were canceled, but the annual rally was reinstated in 2013, and was expected to be profitable for the town. Following a biker gang shooting at the 2014 rally, Hollister mandated that bars must stop selling alcohol after midnight during the 2015 rally. In 2016, the city hired its third promoter in four years; turnout for the 2016 rally was expected to be around 40,000.

All content from Kiddle encyclopedia articles (including the article images and facts) can be freely used under Attribution-ShareAlike license, unless stated otherwise. Cite this article:
Hollister, California Facts for Kids. Kiddle Encyclopedia.