Jazz is a music genre that originated in the African-American communities of New Orleans, United States, in the late 19th and early 20th centuries, and developed from roots in blues and ragtime. Jazz is seen by many as "America's classical music". Since the 1920s Jazz Age, jazz has become recognized as a major form of musical expression.

Jazz is characterized by swing and blue notes and improvisation. Jazz has roots in West African cultural and musical expression, and in African-American music traditions including blues and ragtime, as well as European military band music. Although the foundation of jazz is deeply rooted within the black experience of the United States, different cultures have contributed their own experience and styles to the art form as well. Intellectuals around the world have hailed jazz as "one of America's original art forms".

It is difficult to give an exact definition for "jazz". One important part of jazz is improvisation (improv), which means the person playing is making music up as they go along. If a jazz band is playing a song, the song may have several solos where one player will improvise while the rest of the band, except for the rhythm section (such as the piano, bass, or drums), does not play. Some common jazz instruments include the saxophone, trumpet, piano, double bass, and drums.

Although jazz is considered difficult to define, in part because it contains many subgenres and because it encompasses a wide range of music spanning a period of over 100 years, from ragtime to the rock-infused fusion. Attempts have been made to define jazz from the perspective of other musical traditions, such as European music history or African music. 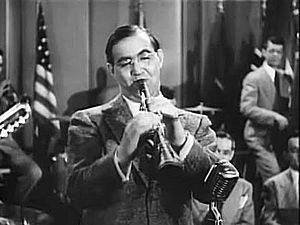 There have been different types of jazz through time. New Orleans jazz began in the early 1910s. Dixieland jazz was also popular. In the 1930s, there was swing jazz, which was also called big band jazz. In the 1940s, bebop became a major type of jazz, with fast songs and complex harmony.

Large jazz bands, which are called big bands, were also popular in the 1940s. Big bands usually have 5 saxophone players, 4 or 5 trumpet players, 4 trombone players, a piano player or guitar player, an acoustic bass player, a drummer, and sometimes a singer.

In the 1950s, there was hard bop jazz. In the 1960s, there was modern jazz and free jazz. In the 1970s, jazz fusion began to blend jazz music with rock music. Some jazz is still played with the same improv methods as it did at its beginning, except with modern electronic instruments.

All content from Kiddle encyclopedia articles (including the article images and facts) can be freely used under Attribution-ShareAlike license, unless stated otherwise. Cite this article:
Jazz Facts for Kids. Kiddle Encyclopedia.