The Gower Peninsula (Welsh: Gŵyr) in the City and County of Swansea in south Wales in Britain is an Area of Outstanding Natural Beauty. It contains over twenty villages and communities.

Bishopston – or Llandeilo Ferwallt – is an inland village, 6 miles (9.5 km) west-southwest of Swansea and near the beaches of Caswell Bay, Brandy Cove and Pwll Du. One of the larger villages in Gower, it has its own rugby club, South Gower Rugby Football Club, and its own primary and comprehensive schools. (Bishopston is part of Swansea's Bishopston ward.)

Bishopston church, at the head of Bishopston Valley, is dedicated to Saint Teilo, who gives the village its Welsh name. The church contains a plain, massive font of Romanesque type, and its tower holds two 18th-century bells. In the churchyard are the remains of an old stone cross. 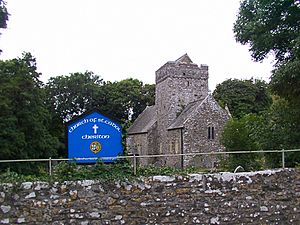 Cheriton, near the north coast, is popular with summer tourists as a place to stay whilst exploring the beaches in the local area. The 13th-century church of St Catwg (or Cadoc) is one of the most beautiful in Gower, and is Grade 1 listed. The psychoanalyst Ernest Jones is buried in its churchyard.

The inland village of Gowerton (Welsh, Tregwyr), about 4 miles north west of Swansea city centre, is a gateway to Gower. Its original name was Ffosfelin; it has also been known as Gwter Felen. (The village falls within the Gowerton electoral ward of Swansea.)

In 1980, the Welsh National Eisteddfod was hosted on the 'Elba' area of the village. The Eisteddfod stone (Gorsedd stones) is located on the round-about opposite the garage on the road to Penclawdd.

The 12th-century village church, St. Cenydd's Church, is the largest in Gower, and was founded by St. Cenydd, who in the 6th century made a hermitage here, which was destroyed by Vikings in 986. The folk singer, Phil Tanner, is buried in its churchyard.

A painting of Worm's Head from Llangennydd was made by Cedric Morris. A painting of Llangennith Burrows by John Nash is held in the Government Art Collection.

Llanmadoc is in the north west of Gower. The village is named after the churchyard of St Madoc, who founded his hermitage or monastery here in the 6th century. The 13th-century building was restored in 1865, but retains a Romanesque font and a Romano-British tombstone. Llanmadoc Hill, formed of Old Red Sandstone, is a landmark of west Gower and affords wide views from the top. An evocative painting of the Hill, by Cedric Morris, may be seen at the Glynn Vivian Art Gallery, Swansea. A painting of Llanmadoc was also made by John Nash. The Medulli were the likely Celtic tribal ancestors of Madoc. Haplogroup R1b (Y-DNA) is consistent with the regions of Llanmadoc, Wales and Médoc, Bordeaux, France and the Celtic migrations from the South East to the North West, and likely predates St. Madoc.

Close-by communities include Cheriton and Landimore. Nearby beaches include Broughton Bay and Whiteford Sands.

Llanmorlais, on the north coast, was a cockling village. The name Llanmorlais is not a true Llan place name, but a corruption of the village's old name, Glan Morlais, which refers to the banks of Morlais Stream. (The village is in Penclawdd electoral ward of Swansea.) In 2014, it was rated one of the most attractive postcode areas to live in Wales.

Llanrhidian is a north Gower estuarine village, sloping down to salt marshes. (It is in the Gower electoral ward of Swansea.)

The village gets its name from Saint Rhidian. Its church is dedicated to St Illtyd and St Rhidian. The present building was constructed in the 13th century, with a chancel and tower added in the 14th century. In the porch may be seen a 9th-century stone, bearing simple carvings of human figures and animals. A standing stone on the village green may be the remains of a village cross.

Murton is in the Bishopston ward of Swansea. It lies between Bishopston and the village of Newton. 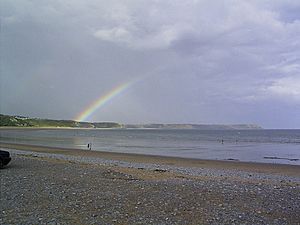 Oxwich is in the far south of Gower. Attractions include the Oxwich Burrows, the Tudor Oxwich Castle, Penrice Castle and Oxwich Bay. The ancient church is dedicated to Saint Illtyd. (Legend says that the stone Baptismal font was placed there by the saint himself.)

Parkmill is an inland village between Penmaen and Ilston, on the northern side of the A4118 road, the main road between Swansea and Port Eynon, in a wooded valley. It once lay within Parc le Breos, a deer park established in the 1221–32 CE by John de Braose, Marcher Lord of Gower.

Penclawdd is in the north of the peninsula. It is one of the larger villages in Gower. Part of the village is perched on a high location, enjoying panoramic views over the Loughor estuary and Gower country, while the main part of the village stretches along the edge of the estuary. It is plentiful in birdlife, and wild horses roam the estuary. Penclawdd is famous for its local cockle industry, which goes back for many years to Roman times.

(It is in Swansea's Penclawdd electoral ward.) 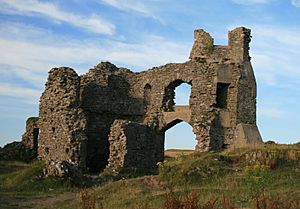 Pennard is on the south of the peninsula, about 7 miles south west of Swansea city centre. (It falls within the Pennard ward of Swansea.) It has a church, health centre, library, a primary school and a golf course. It contains the ruins of Pennard Castle. The poets Vernon Watkins (1906–1967), Harri Webb (1920–1994) and Nigel Jenkins (1949–2014) are buried at St Mary's church.

Penmaen is an inland village – a scatter of houses around the A4118 road at the foot of the slopes of Cefn Bryn. There are a number of archaeological sites in the area. It contains Parc-Le-Breos, a 19th-century hunting lodge, that was once the deer park of William de Breos, Lord of Gower, but today serves as a hotel and pony-trekking centre.

Penmaen Castle began as a small timber castle. Later it was replaced by a stone structure. The dates of the structures are not known but the ringwork and timber gateway is accepted as being Norman. The timber gateway was destroyed by fire and later replaced by a drystone walled gate tower. It is believed that the replacement could either have been built by a Norman or the Welsh lord Rhys Gryg ap Rhys, who had destroyed all the castles in Gower in 1217.

A painting of Penmaen Burrows was made by John Nash.

This small, south coast village, extending from Port Eynon beach to the top of a hill, has two fish and chip shops at the sea front, a youth hostel, a pub, a coffee shop and a restaurant.

To the north-west lies Overton village, with footpaths to Overton Mere, a rocky beach. Half a mile to the east of the main beach stands the village of Horton.

Reynoldston is an inland village. It has its own elected community council.

It had one of the longest functioning community broadband schemes in Britain; which started in 2003 and finished at the end of 2008 following the availability of ADSL. It came back in 2012–2013 but with Optical fiber instead of wireless network; and to promote this idea a "better broadband roadshow" was organised. 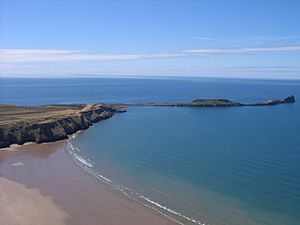 Rhossili is on the southwestern tip of the peninsula. Since the 1970s it has fallen within the boundaries of Swansea. The village has a community council and is part of the Gower parliamentary constituency, and the Gower electoral ward.

Slade is situated near the south coast, north west of Oxwich Bay. Points of interest include Eastern Slade Farm, a dairy farm and campsite.

The nearby Slade Bay includes a small beach, and is a breeding ground for fish such as rays, dogfish, common dab and bass.

Three Crosses (Welsh: Y Crwys) is an inland village at the north east of the peninsula. Situated at a crossroad on the road from Swansea city centre (10 km) to Penclawdd (5 km), it grew up in the early 19th century to serve small shallow collieries in the area. These collieries had disappeared by the early years of the 20th century, and since then Three Crosses has developed as a 'dormitory village' for Swansea. Three Crosses is home to Capel Y Crwys, a large independent chapel.

It has its own Community Council Three Crosses community in the City and County of Swansea.

Upper Killay is an inland village. It has its own elected community council. The Clyne Valley cycle track passes though the village. Upper Killay is a gateway to Gower from the east. The main road through the village passes over a cattle grid to the west, which marks the start of Fairwood Common. The village has its own rugby team, Swansea Uplands RFC. Their clubhouse and playing fields are to the south of the village, on Fairwood Common.There is a primary school in Upper Killay,named Cila Primary School. The school has a nursery. There is a park next to the community centre and a village shop.

All content from Kiddle encyclopedia articles (including the article images and facts) can be freely used under Attribution-ShareAlike license, unless stated otherwise. Cite this article:
List of villages in Gower Facts for Kids. Kiddle Encyclopedia.