Maghull (/məˈɡʌl/ mə-GUL) is a town and civil parish in Sefton, Merseyside. Historically in Lancashire, the town is north of Liverpool and south of Ormskirk in West Lancashire. The area also contains HM Prison Kennet and Ashworth Hospital. Maghull had a population of 20,444 at the 2011 Census. Housing in the town is almost entirely a 20th-century settlement of semi-detached and detached housing although remains of the original town do exist. The town has had an elected council since the Local Government Act 1894 when the government set up a network of local governance across England. Following the Local Government Act 1974, the council changed its name from a parish to a town council.

The original settlement, consisting of fifty people and six square miles of agricultural settlement, was established prior to the Domesday Survey of 1086 where the town is recorded as Magele on a ridge of high ground, that can be most clearly seen at Red Lion Bridge towards the centre of the town and the Leeds and Liverpool Canal follows it on the plain and the A5147 on the brow. This ridge marks the edge of the flood plain of the River Alt, providing protection from flooding and access to this fertile pasture of the plain. The name Maghull may have been derived from the Celtic word "magos", the Old Irish "Magh" and the Old English "halh", meaning "flat land in a bend of the river". Another theorised origin is Anglo-Saxon mægðehalh = "nook of land where mayweed grows". A church is known to have existed in the area in 1100 although it has been rebuilt at least once and the chapel still stands, in the churchyard of the Victorian St Andrew's and is the oldest ecclesiastical building in Merseyside still in regular use for worship but in 1756 the mediaeval nave of Maghull Chapel was pulled down with a Roman Catholic dual-purpose school-chapel opening in 1890 near Massey's Barn.

It is noted that in 1568 Maghull Moss was divided between Sir Richard Molyneux of Melling and Edward Hulme of Maghull. The boundary of Maghull was, in the north, Maghull Brook and to the south, Melling Brook; the west was marked by the River Alt. At the eastern edge, however, the boundary was ill-defined on the moorland and due to the value of turf from the moss as a vital fuel this caused regular disputes between both Maghull and Melling Manors. Maghull Manor House was built in 1638 and local tradition has it that Charles II slept there during a visit to the area but by 1780 a new manor house had been built near the site of the original and it still stands in the grounds of Maghull Homes with part of the original moat. It is also recorded that by 1667 the population of Maghull had increased to 599 with 136 houses and 127 families and by 1770 initial work had begun on the Leeds and Liverpool Canal with the first sod being cut by the Honourable Charles Lewis Morduant. The actual spot lies in a rock cutting 400 metres to the east of Halsall Hill Bridge. Soon after, the Red Lion public house was built in Maghull to serve the canal trade. It became a café and general store in the 20th century and was demolished after the Second World War. Several other canalside pubs were built over the years; for example, near Hall Lane Bridge there was the Traveller's Rest (demolished 1936) and the Horse and Jockey in Melling. In 1774, the canal had reached Maghull and provided it with its second connection to Liverpool. The arrival of the canal created new industry in the area, notably quarrying of sandstone and clay extraction. It also bolstered the local hostelry trade.

Maghull's first school was founded in 1668 in a small cottage in School Lane with the headmaster being Humphries Webster, showing the town's emergence although County Rates from 1716 said of the town "Maghull doth always bear and pay a third less than either Down Holland or Lidyeat". This shows that Maghull was a developing community, but still not as rich as its neighbours Downholland and Lydiate. Economic development continued with the Molyneux family (Earls of Sefton) being significantly active in bringing about the Alt Drainage Act in 1779 which resulted in many acres of marsh land along the river eventually becoming good agricultural land. This had led to the growth of the population to 534, with about half the employment being in trade rather than agriculture and a rise in 1815 to a population of 720 people with 71 families engaged in agriculture and 29 in trade, manufactures and handicrafts. There were 108 inhabited houses.

By the 1820s, horse racing was well established on land in Maghull. Old Racecourse Farm later became the site for the Meadows Hotel; and Old Racecourse Road, off Sefton Lane, commemorates the sport. Baines' Directory of Lancashire in 1825 provided the first list of specialist male occupations in Maghull – 1 blacksmith, 1 cooper, 1 tailor, 1 land surveyor and 1 wheelwright. By 1840 the agriculture of the area had changed from animal to arable farming and the 1861 National Census the population stood at 1,222. Due to this increase in population the railway came to Maghull in 1849, with a station on the Liverpool, Ormskirk and Preston Railway as well as the construction of the town's first police station which was set up by Lancashire County Council in 1870 and the town got a second station in 1884, Sefton and Maghull, on the newly built Cheshire Lines Committee Southport & Cheshire Lines Extension Railway to Southport, the line was an extension of the North Liverpool Extension Line. A large section of embankment has been destroyed to make space for Switch Island. In 1933 Northway (A59 road) was built, initially as a tree-lined single carriageway but dualled in the early 1960s, which bisects Maghull, taking travellers from Liverpool to Ormskirk off 'Liverpool Road'. The arrival of Northway triggered an increased rate of expansion in Maghull.

In 1939, the IRA blew up the swing bridge at Green Lane on the canal but the strategic significance of this has never been fully explained due to Maghull's relative insignificance. In the Second World War, two bombs landed, one adjacent to King George V Playing Fields, on the site of the former residential home, and one in Ormonde Drive. A house that was then 16 Park Lane (now 321, the houses were re-numbered in the late 1960s or early 1970s), Moss Side, was also destroyed; it was rebuilt in the 1950s. It served as a refuge for up to 6,000 people a night from Bootle. American and Polish army units were stationed in Maghull and it also held several camps for displaced persons. Park Lane TB sanatorium and a hospital, built to treat shell shock victims, were combined to form Ashworth Hospital and one hundred patients transferred from Rampton Secure Hospital with it remaining a secure hospital to this day, holding such patients as Ian Brady. In 2010, plans were announced by the Labour government that new housing was needed and Sefton East – where Maghull is – was chosen as one of the locations for the new homes. Sefton Metropolitan Borough Council showcased the plans at various locations around south Sefton, and were met by local opposition. 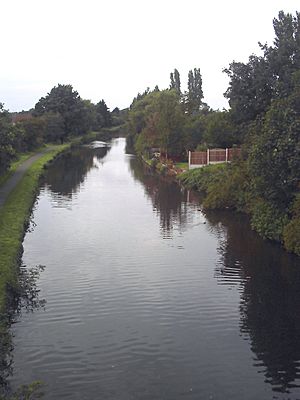 Maghull is 8 miles north-north-east of Liverpool city centre. To the north west is Lydiate, to the east Melling, to the south Aintree and Netherton and to the west the Mersey Forest and Sefton village. Maghull is separated from the rest of the Greater Liverpool sprawl by a green belt which runs across the Switch Island motorway junction and through which flows the River Alt.

Maghull is bisected by the A59 road and is served by Maghull railway station, Merseyrail has also proposed opening a second station Maghull North, along with bus routes to the nearby areas of Kirkby, Southport, Ormskirk and Liverpool city centre with most running past or near Maghull Square. The M57 and M58 motorways start at Switch Island, between Aintree and Maghull. The Leeds and Liverpool Canal runs through the centre of old Maghull. The Trans Pennine Trail, a long distance footpath from Southport to Hornsea, near Hull skirts Maghull, following the line of the old Cheshire Lines railway.

All content from Kiddle encyclopedia articles (including the article images and facts) can be freely used under Attribution-ShareAlike license, unless stated otherwise. Cite this article:
Maghull Facts for Kids. Kiddle Encyclopedia.