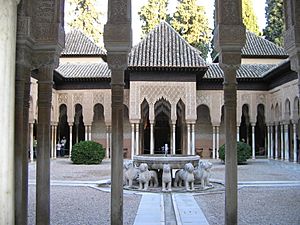 Court of the lions in the Alhambra, a Moorish palace built in the 14th century in Granada, Spain

The Moors were the Muslim inhabitants who lived on the Iberian Peninsula and North Africa in the Middle Ages. In Europe, the word is very often used to talk about people whose ancestors were North African.

The Moors (Umayyad Muslims) came from North Africa and were initially of predominate Berber ancestry. Many of them came to what is now Spain and Portugal. They had a very big influence on the culture of these countries.

The Moors were the ones who captured Al Andalus and named it Al Andalus, Which means land of the vandals.

All content from Kiddle encyclopedia articles (including the article images and facts) can be freely used under Attribution-ShareAlike license, unless stated otherwise. Cite this article:
Moors Facts for Kids. Kiddle Encyclopedia.