Mossley (/ˈmɒzli/) is a town and civil parish in Tameside, Greater Manchester, England, in the upper Tame Valley and the foothills of the Pennines, 3 miles (4.8 km) southeast of Oldham and 8.9 miles (14.3 km) east of Manchester.

The historic counties of Lancashire, Cheshire and the West Riding of Yorkshire meet in Mossley and local government wards and church parishes correspond to their boundaries. Mossley had a population of 10,921 at the 2011 Census. It is the only parished area of Tameside, having had a parish council since 1999.

Believed to originate in around 1319, the name Mossley means "a woodland clearing by a swamp or bog".

George Lawton, the son of magistrate and alderman John Lawton, inherited a family fortune and, when he died in August 1949, he left his entire estate (apart from some legacies) to the people of Mossley. Part of his estimated £40,000 estate was left to build a public meeting place, the George Lawton Hall, which is a testament to his generosity. 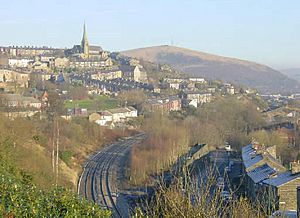 A view of Mossley from near Mossley railway station. 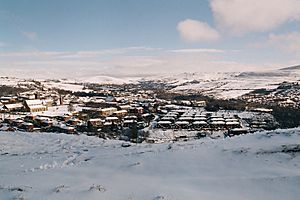 Mossley's proximity to the Saddleworth Moor and the Pennines makes it prone to precipitation.

Mossley lies amongst the foothills of the Pennines, on the western edge of Saddleworth Moor.

Mossley's French twin town is Hem, situated near Lille, in the Nord département.

Mossley's Town Council passed a resolution in November 2009 to make Mossley a Fairtrade Town. A group of local campaigners and activist have started the Fairtrade Mossley group to make 2010 the year that Mossley becomes a Fairtrade Town.

A tram network operated by the SHMD Joint Board ran lines through Mossley from 1904 to 1945, until their replacement by buses. The second-generation tramway Manchester Metrolink currently terminates at nearby Ashton-under-Lyne for connections to the city centre.

All content from Kiddle encyclopedia articles (including the article images and facts) can be freely used under Attribution-ShareAlike license, unless stated otherwise. Cite this article:
Mossley Facts for Kids. Kiddle Encyclopedia.